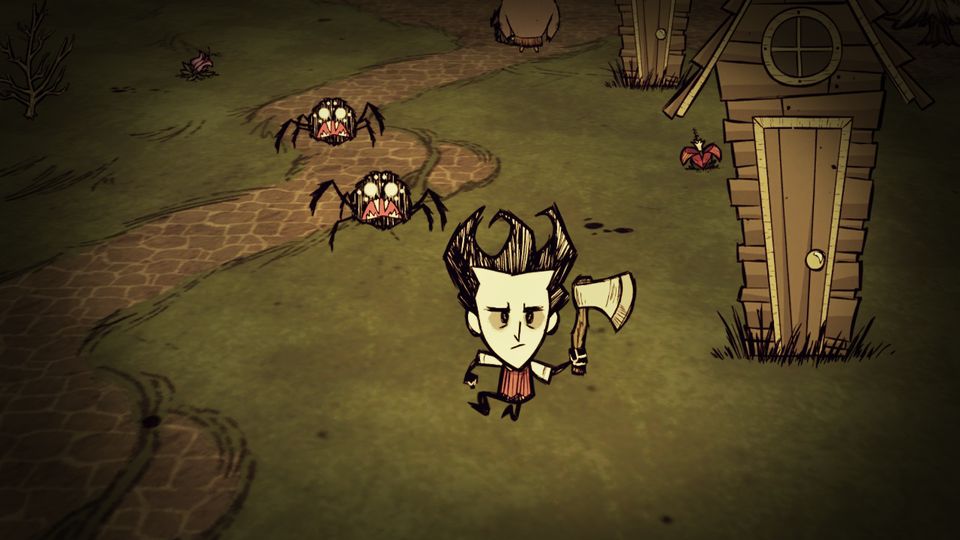 Klei Entertainment impressed us last September with their stealth-action game Mark of the Ninja. Now the Canadian indie developers have decided to tackle the survival genre with their new roguelike game, Don’t Starve. The game has been on our radar since it went into beta last year which Klei used to get feedback to help improve the game.

The game features wonderful Tim Burton style cartoon graphics. You play as Gentleman Scientist, Wilson, who has been sent to a mysterious wilderness land by an evil demon. Your goal is simply to survive and how you do this is left entirely up to you. Just like Wilson the player is given no instructions and it’s your job to work out how to do everything. That’s right there isn’t even a getting started tutorial.

If you like plenty of help while playing games then you’re going to have a hard time in Don’t Starve. When Wilson awakes he is told that he might want to find something to eat before night comes and then you’re left to get on with it. In the top right of the screen is a gauge that shows you what day it is and how long until dusk and then nightfall.

A whole day lasts eight minutes, on default settings half of your day is daylight leaving two-and-a-half minutes for dusk and a minute-and-a-half for night time. Eight minutes doesn’t sound a lot but it feels far longer as you have a lot to try and get done in that time. The survival aspect is a bit like Minecraft where you need to get done what you need during the day. In Don’t Starve the main thing you need to ensure is that you have the materials ready to create a fire.

Wilson is initially only able to gather items with his hands and this restricts him mainly to small things such as twigs, flowers, grass, carrots, berries and flint. By combining twigs and flint he can make a flaming torch but he needs tools to obtain the logs for a campfire or rocks for a fire pit. Gathering flint and twigs allows him to make his first tools – an axe and a pick. With these he can mine, chop down trees and attack enemies.

By the time you have collected the materials for your first fire it’s usually getting close to night. When night falls everything goes completely black and you tend to get eaten quite quickly. If you have a fire you can sit by it to wait until the next day comes along. It’s important to keep logs handy to top up the fire otherwise the flame dies and it will go out. Mining rocks allows you to make a permanent fire pit that just needs logs to make a fire.

After surviving your first night you can then begin to plan for your next day’s activities and also begin to worry about Wilson’s three attributes. These are health, hunger and sanity. The most pressing as you can guess from the title of the game is always his hunger. Much of your time in Don’t Starve is spent searching for your next meal.

Initially carrots pulled from the ground or berries picked from bushes are enough to sustain Wilson. However they only provide the tiniest bit of nutrition. If you cook them they help a bit more but you really need to concentrate on finding something more substantial. There are plenty of options available for Wilson from foraging, farming, trapping or hunting.

Once you’ve got enough food to keep him going it’s useful to mine rocks to find a gold nugget. This can be used in the creation of a Science Machine which works a bit like crafting tables in Minecraft. This gives you access to more advanced crafting recipes and making each one unlocks them for future use. Other machines can be discovered to unlock even more things to make.

The day-night cycle continues for the whole game so you soon settle into a rhythm of getting as much exploring done during the day as possible. Dusk is about getting ready for the night by making sure you have enough materials or trekking back to your camp. Night is about staying safe, crafting some more and plotting your course of action for the next day.

Over time you’ll learn to cook more things to keep hunger at bay but there is another variable to start worring about which is your sanity. Over time you slowly begin to go insane which leads to hallucinations and worse. Certain things such as eating some foods, getting attacked at night or fast-travelling through worm holes can make it drop faster. Eating nice food, getting decent rest, discovering new items and even having a shave can help to restore your sanity.

Once you’ve managed to stay sane and keep hunger at bay the final thing to be concerned with is staying alive. The world is full of seemingly endless ways to kill you. In most games this isn’t an issue as you would simply respawn, return to a checkpoint or load a save game. However death in Don’t Starve is permanent meaning you have to start again from scratch. This also means a brand new world to explore as each is randomly created.

Permadeath is a punishing concept and while dying after 20 minutes play isn’t so bad it hurts when you lose a few hours effort. You can avoid this somewhat by ensuring you look after Wilson. Building defences, armour and weapons all help as does ensuring you have somewhere safe to go each night. What you can’t avoid though is the unexpected events that take Wilson’s life and ruin your game.

One time we hit a spiders nest and were surrounded by spiders. Then there was a time we spotted some twigs in a swamp and while excitedly running to collect them we were murdered by a tentacle that appeared from nowhere. One time we were stung to death by bees while trying to raid their hive for honey. This was followed by being trampled by a herd of Beefalo, ripped to shreds by a pack of wandering hounds and pecked to death by a tallbird. Each time your game ends you are awarded an amount of XP which goes towards your level and unlocks new characters to play as each with their own abilities.

Replayability is very high and even after many hours of play we were still finding plenty of new things. We’ll not tell you about lots of those here though as it’s so fun and rewarding to discover them yourself. Only the most dedicated players are likely to see the game’s later offerings. A nice feature is the ability to customise the world generation. Here you can add more or less of every kind of item in the game.  So you might choose to add more food and less monsters for an easier time or a longer night time and more monsters for extra difficulty.

Don’t Starve is a fantastic game while you’re winning but it makes you mad when it takes your life without warning. The permadeath thing isn’t for everyone and it’s a shame there isn’t a mode to play with lives or save games. It’s worth noting that Klei are heavily supporting the game and have promised a minimum of 6 months of free content expansions. If you’re a fan of difficult games and not easily frustrated then you should definitely check it out.