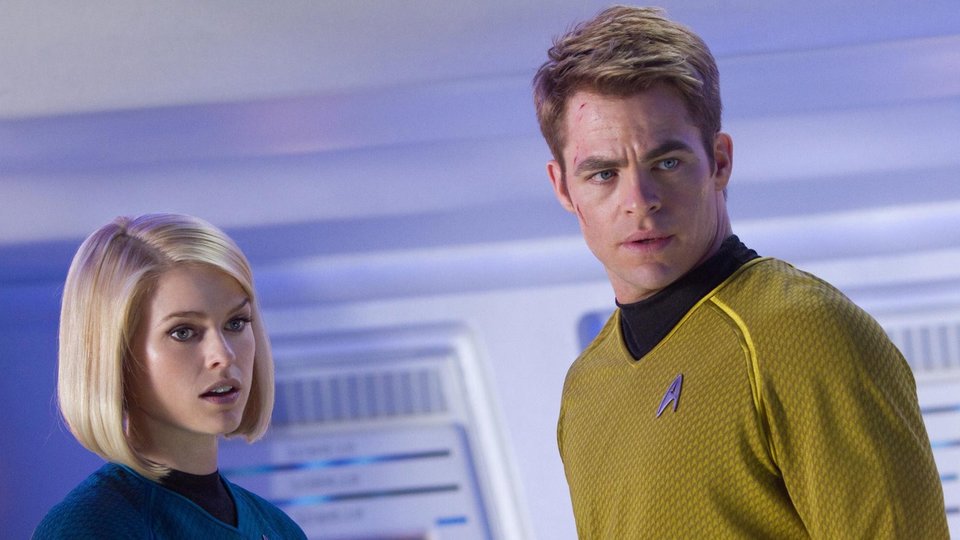 When a Starfleet building is targeted by an unprovoked act of terrorism, the crew of the Starship Enterprise, led by James T. Kirk (Chris Pine – This Means War) go into action to bring the culprit John Harrison (Benedict Cumberbatch – Tinker Tailor Soldier Spy) to justice. But Harrison isn’t what he seems and soon a bigger conspiracy unravels that could plunge Earth into all out war.

Star Trek Into Darkness delivers everything you are expecting and more. It’s a near-perfect sequel full of amazing spectacle, breathtaking excitement and wow-moments aplenty. Following on from the hugely popular reboot of 2009, Star Trek Into Darkness sets up the next stage of these iconic characters lives with a purpose and tact that’s both refreshing and respectful to the original legacy.

The rich history of Star Trek is used to good effect here with Into Darkness creating story threads and introducing characters that will be familiar to die-hard fans whilst setting up a tantalising third and possibly even fourth movie. Looming threats are mentioned, casualties come thick and fast and the fates of entire worlds rest neatly within the confines of this clever and sharp script, once again penned by Roberto Orci, Damon Lindelof and Alex Kurtzman.

The effects are stunning. From a breathless opening sequence (that features one of the best Enterprise moments in history) to the destruction of a futuristic, densely populated London, Into Darkness never shys away from the fight. Putting everything onscreen in a visceral treat for the senses, Star Trek Into Darkness feels tangible and honest in every frame. There is nothing that doesn’t work here, from the electrifying effects down to the quieter, more character-driven moments.

The awesome ensemble cast all return with Chris Pine leading the line very well as Jim Kirk. The dynamic shared with Zachary Quinto’s Spock continues to flourish and the two are given plenty of opportunity here to make the roles their own. Both work off one another excellently and are key to the success of this film.

Zoe Saldana, Simon Pegg, Karl Urban, John Cho and Anton Yelchin all impress with important supporting roles and we once again welcome back Bruce Greenwood as Christopher Pike. His exchanges with Chris Pine are a particular joy to watch.

The new faces in the franchise all impress too with the delectable Alice Eve quite stunning as Carol Marcus and Peter ‘Robocop’ Weller making a great Starfleet Commanding Officer. Benedict Cumberbatch is sensational as John Harrison, the films iconic villain. Much speculation surrounds his character and without giving anything away, there is plenty of opportunity for Cumberbatch to get huge cheers from the crowd. Noel Clarke even hands in a career-best performance in a short but pivotal cameo role. The fact that he only has one line is pure coincidence.

In J.J. Abrams we trust and he’s delivered yet another knock-out movie that will be the one to beat in 2013. Star Wars’ gain is very much Star Trek’s loss if he decides to focus all his attention on the relaunch of that franchise. Hopefully he will stay on in some capacity because the success of these Star Trek movies lies squarely at his feet. With a deeply involving and clever story coupled with spectacular blockbuster action, Star Trek Into Darkness is everything a summer blockbuster should aspire to be. Purists may have a few issues but ultimately, if you miss this you’ll miss out on the best Sci-Fi event of the year.