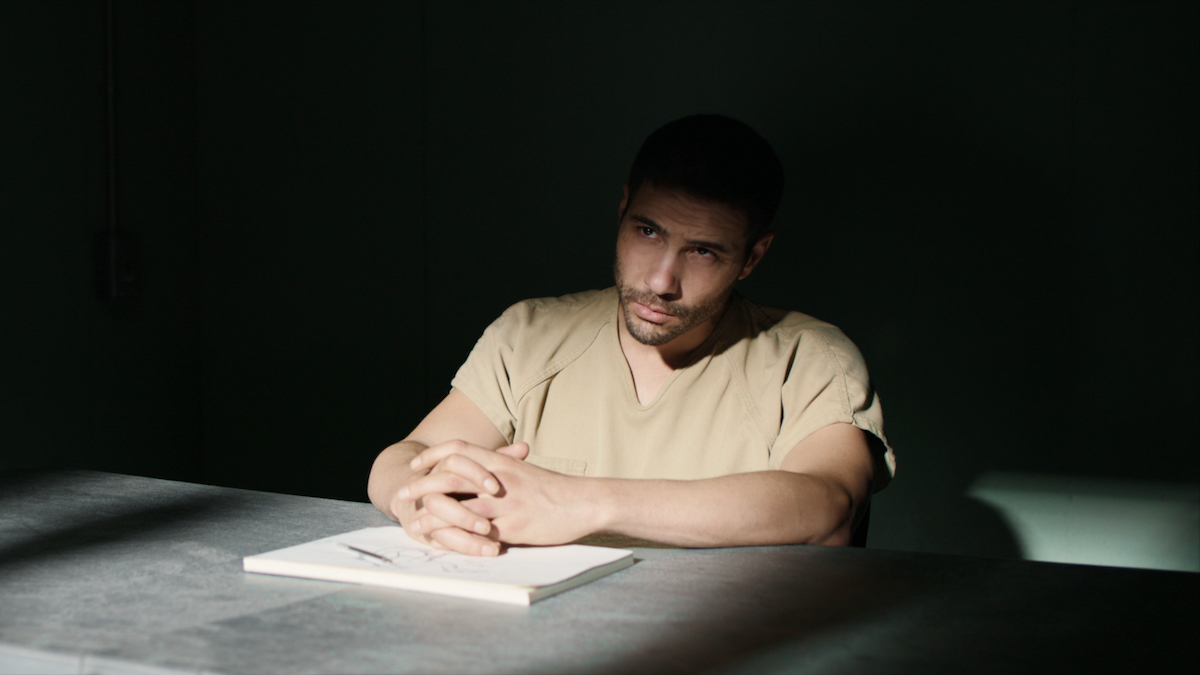 Easily the most A-list film of the festival, The Mauritanian, directed by Kevin Macdonald makes it UK Premiere at GFF this week. Featuring an all-star cast, including Jodie Foster and Benedict Cumberbatch, this true-life legal thriller explores the thorny issue of America’s war on terror, in the aftermath of the 9/11 attacks.

Tahar Rahim stars as the titular Mauritanian, Mohamedou Salahi, a man who is arrested and detained without charge in November 2001. If you are familiar with the true story, or have read his memoir (Guantanamo Diary) you will know that he—like so many others—was then transported to Guantanamo Bay, where he was subjected to the US military’s now infamous “special measures” treatment. Roughly translated, he was tortured, abused, humiliated, and brutalised, until he gave them a forced confession. He spent 14-years of his life in Gitmo.

The film picks up in the years after his arrest, with experienced attorney Nancy Hollander (Jodie Foster) being asked to take on Salahi’s case. Under habeus corpus, Nancy, along with her associate Teri Duncan (Shailene Woodley) is looking to force the US government to reveal what evidence they have on Salahi to justify his detainment. Then on the flip side, we have US Marine lawyer Lt Col. Stuart Couch (a miscast Benedict Cumberbatch) who has also been assigned the Salahi case. His orders are to bring charges against Salahi and seek the death penalty for his crimes.

The films best moments are when it focuses on Salahi. The human drama of what he endured is where The Mauritanian really finds its feet. Rahim is excellent, and the time spent with him in Gitmo not only shows the human cost of US foreign policy post 9/11, it does what the best Vietnam movies do and wrestles with the idea of what this conflict has done to America’s soul. Be warned though, some of these scenes are excruciatingly difficult to watch.

Where the film is less successful is in the legal drama-cum-conspiracy thriller element. Don’t get me wrong, it’s very interesting, but not particularly engaging on an emotional level. Both sides are essentially trying to achieve the same goal, but find themselves up against complex legalities, government cover-ups, and mass redactions, preventing them from finding out the truth.

Thanks to a smartly written script however, the truth is something that remains ambiguous and just out of reach for the entire film. Both sides of the legal argument against Salahi present perfectly compelling versions of who this man might actually be. Is he the innocent, well-travelled family man he claims to be? Or the former Al-Qaeda soldier and mastermind recruiter of the September 11 attacks, whom the US government believes him to be? As the film progresses, Macdonald carefully starts to peel away at each of these versions, casting doubt in the minds of the respective lawyers. This grey area is where the film is at its most interesting, looking through the distorted prism of American patriotism in the aftermath 9/11. Who is a patriot and who is a traitor in this new world?

Whilst not everything works in The Mauritanian, it is still an immensely watchable film, and one I would definitely recommend. It’s great to see Jodie Foster back on the screen, even though she is given very little to do. Benedict Cumberbatch has the more interesting and nuanced role, though I do still question his casting as a deeply religious, southern-accented military Colonel. The star turn of course is Tahar Rahim, whose gripping performance is the absolute beating heart of this film.