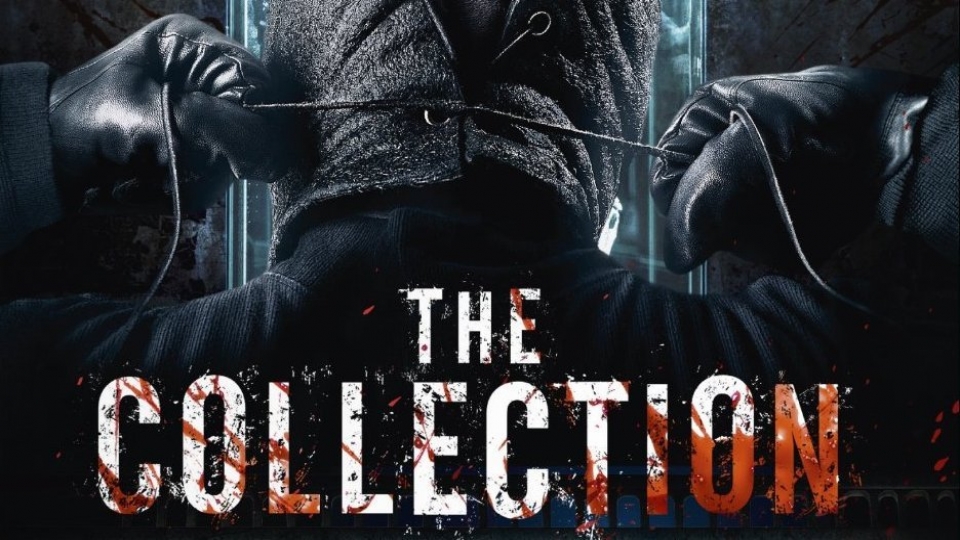 Elena Peters (Emma Fitzpatrick – In Time) is kidnapped by the mysterious Collector. Her dad (Christopher McDonald – Requiem For A Dream) hires a team of ex-mercenaries, lead by Lucello (Lee Tergesen – Generation Kill), to find Elena and return her safely. But if it means killing the collector as well, then so be it. The trained killers are lead by a survivor of The Collector, Arkin (Josh Stewart – The Dark Knight Rises), who leads them into a disused hotel full of his traps and experimental mutations. The Collector will stop at nothing to ensure none survive breaking into his place.

The Collection is the sequel to 2010’s The Collector, and it’s kept the same writing team together to deliver more shocks in the ongoing story of the masked killer. Instantly we were worried that it would be a below-par, forgettable sequel to a good first film. Yet, the writers have kept what worked from the original and multiplied it by 10. Ok, the story is pretty basic and very much owes a huge debt to the Saw franchise (but what recent horror film doesn’t?) , and it creates one of the better horror sequels we have seen in recent years. It’s sharp, to the point and never moves off course – to deliver gore and shocks aplenty.

With a horror film that has a leading lady we would normally see someone who can convince as a scream queen – unfortunately Emma Fitzpatrick is very poor and never convinces us that her life is in peril. Instead she is constantly running from room to room, and doesn’t see any of the blatantly obvious ways to out fool the bad guy.

Fortunately to make up for the lack of quality from the main star, there is the team of mercenaries. Lee Tergesen is the stand-out by far and it’s the first time we have seen him play an action hero (and he pulls it off rather well). If he continues to try out these roles then in a few years we could easily see him turning up in The Expendables – he can handle himself rather well in fist or gun fights.

The other people in the team all have their select fighting abilities and do put them to good use. One disappointment is the wasted acting of Andre Royo, this guy is such a cult icon now that for him to only have four lines and hardly any action seems criminal to us.

The Collector trades on the traps scheme that worked so well for Saw, and in this film they have thrown into the mix many ideas. All of them work well and have ample blood and gore attached. There are elements of Silence Of The Lambs with the skin peeling, and here the film makers don’t hold back showing it. It’s a rare move that pays off rather well. There are a couple of traps that do stand out, but we won’t give them away as it would ruin the surprise. Also the opening ten minutes are eerily reminiscent of the club scene in Blade, but with a great twist that creates a dance floor swimming with blood.

The Collector is one of a small breed that manages to ramp up the blood from the original and create a very good sequel. The storyline may be basic, but it moves along with a quick style. It’s got more gore than Saw and doesn’t hold back on the squeamish scenes. You’ll never look at a box-trunk the same again.

Advertisement. Scroll to continue reading.
In this article:The Collection