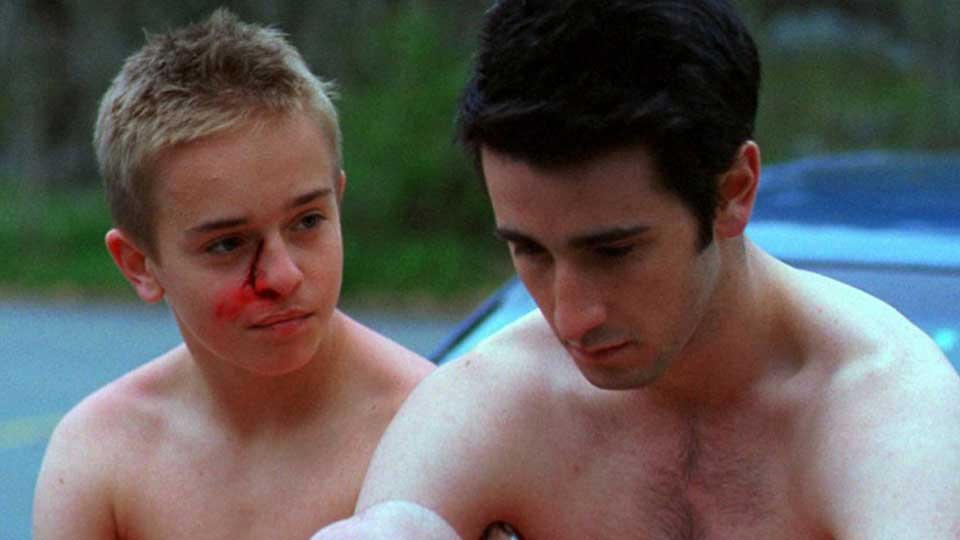 The Boys On Film series has become a staple part of the Peccadillo Pictures catalogue. Each release comprises of a selection of gay-themed shorts by directors from all around the world. The latest instalment is called Youth In Trouble and features 8 shorts depicting gay youngsters from all walks of life. The release follows last year’s fantastic Boys On Film 8: Cruel Britannia.

Youth In Trouble puts the spotlight on gay youth both in and out of the closet. The collection opens with Canadian director Bretten Hannam’s Deep End which finds two brothers pulled apart when one of them reveals that he’s gay. The younger of the two takes the news badly but soon realises that he has to make a choice between supporting his brother or siding with his homophobic classmates. The sentiment in the story is a good one but the short doesn’t have enough time to breathe meaning that it feels too rushed with the characters changing their opinion in seemingly seconds.

As the collection continues on the shorts get stronger. Family Affair from Brazilian director Caru Alves de Souza explores Rossi’s difficult relationship with his older brother. He’s desperate to be part of the gang but his brother wants to shut him out. As he forces his way into the group he gets more than he bargained for with one of his brother’s close friends. This story is one that is beautifully executed and definitely one of the highlights on the collection.

Elsewhere on the collection a rent boy gets a nasty surprise in Spanish director Carlos Montero’s Easy Money, love blossoms between inmates in Australian director Grant Scicluna’s The Wilding and Colonial Gods, by UK director Dee Rees, explores the relationship between a Somali Man and a Nigerian Man with Cardiff as a backdrop.

One of the mis-steps on the release is Together. The short is from UK director James Cook and tells the story of boyfriends David and Mark who realise they may not be alone in their house. The story tries to straddle horror/thriller but we just didn’t buy the pay-off and were a little disappointed. We’ve seen this kind of story told too many times and this one just wasn’t that great.

The strongest two shorts are This Is Not A Cowboy Film by French director Benjamin Parent and Stephane Riethauser’s closing short Prora. This Is Not A Cowboy film finds two young boys discussing Brokeback Mountain in the school toilets with the two youngsters describing the film in amusing and entertaining ways. Prora finds teenagers Jan and Matthieu exploring a deserted Nazi holiday camp and finding themselves revealing secrets to one another that neither expected.

Boys On Film 9: Youth In Trouble, like all instalments of the series, varies in quality. For the most part the shorts are well-written, well-acted and well-directed highlighting some serious talent from across the world. Not every short is a must-see but the majority of the ones included here offer something new and interesting. Boys On Film 9: Youth In Trouble is an interesting watch and one of the stronger instalments of the series so far.

Advertisement. Scroll to continue reading.
In this article:Boys On Film