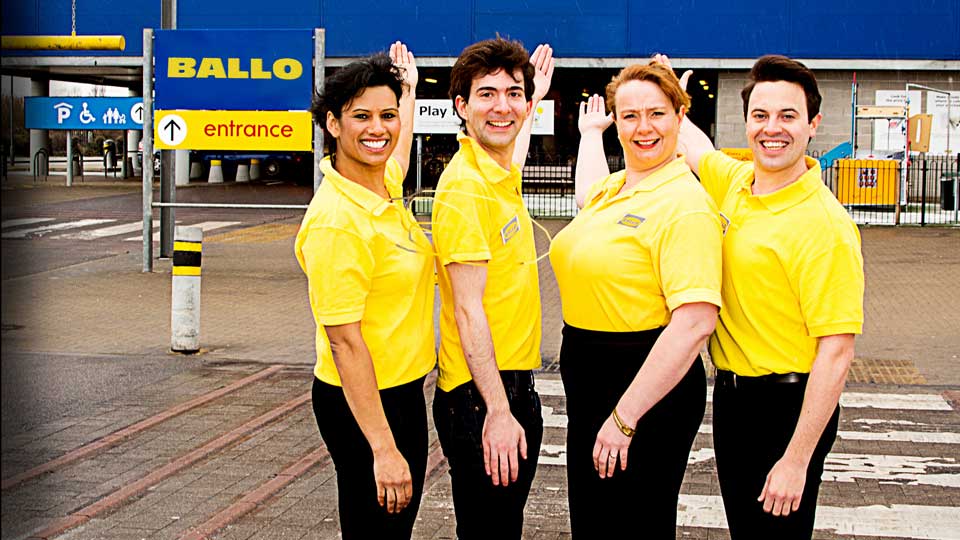 Ballo is OperaUpClose’s thirteenth production (all in new English translations) since its foundation in late 2009. The last time that we saw an OperaUpClose production, it was Donizetti’s L’Elixir D’Amore, which we had mixed feelings about, it was good, but there was something missing and we didn’t really connect with the actors. This time around, their latest production has been notched and tweaked to a completely different level, to one of brilliance.

OperaUpClose’s intention was to combine the Italian characters and to mix them with a strong Swedish identity. The setting for this is the rather unglamorous yellow and blue hues which are the unmistakable sense of style of a famous Swedish homeware store, with this one based just off of London’s North Circular Road! The production is based on the real-life assassination of King Gustav III of Sweden, but Verdi’s political thriller gets an operatic twist and is modernised, to give us Ballo.

Act 1 was full of some exceptional acting and some great operatic vocals. Believable performances were delivered from all the cast and the act really did go by in the blink of an eye. The plot focused on just a few characters, which helps you keep on top of what is going on, with each character being very unique to the story. Humour and one-liners were delivered with excellent comedy timing. No sooner did we find ourselves completely immersed in the show, laughing and being surprised, that we found ourselves astonished that the first act went by so quickly. We particularly enjoyed a giggle as the interval was announced in a shop-style staff announcement, complete with a ringing bell. We were also very amused to be handed a mask, which we were told we would have to wear during the second half performance and wondered what they could be for, intriguing!

One hysterical moment happened during Act 2, where a very mischievous Tom was going around the room constantly singing and pulling faces and teasing colleagues in “what a hilarious situation, oh, what gossip around the store!” This was sung and played upon to exaggerate the awkwardness of the ‘car-park situation’ for the other characters (there are not going to be any spoilers, you simply must see the show to find out why this is so funny!) What we loved about this scene, was that it had a very British feel, where you watched as the others squirmed and felt a sense of utter embarrassment and the more embarrassment they felt, the more that this song felt naughty to be listening to and in an almost childish-like fashion, Tom continued to provoke and make fun for longer than necessary and the audience were in fits of laughter.

This show has many layers to it; it takes you from roars of laughter, to feeling protective of the characters and feeling their emotions as they are portrayed. There are some scenes of a very gripping nature in the production too and the stand out moment for us during Act 3 was where Renato and Amelia were sitting in the flat, when all of the drama about her love affair was about to unfold. This was a truly special performance by Christopher Jacklin and Becca Marriott, who had the audience mesmerised, with an exaggerated round of applause for them, once the scene was over. The actors/trained opera singers are a very talented cast; therefore this production is a completely winning combination. This production definitely has the feel of ‘welcome to opera’ about it and it is accessible and not elitist, as many people portray opera to be. This production is a comedy and Verdi’s music is the perfect setting to the storyline, not all operas are over the top, dark or heavy, this production shows that opera can be fun.

Oscar put in a very fine performance as the camp and over-enthusiastic and innocent PA, who had a child-like enthusiasm and his falsetto was incredible, we were sure that he was hitting notes that some sopranos would be jealous of! One particular scene, where they played out the office party, highlights how Oscar plays upon his character. How many men can you think of could get away with wearing skin-tight gold leggings, whilst doing the conga around a room, whilst making hooting noises with a party whistle, whilst dancing around the room to Abba? This kept us entertained and constantly smiling. The production comes to an end with a rather unfortunate ending at the office party for one of the characters, fuelled by anger and jealousy. We felt that the office party theme was a perfect ending to the show and the masks wearing became obvious, but do you wonder why? You must go to the show to find out!

This production kept us gripped and entertained us for a wonderful few hours of live operatic and acting performance. We definitely recommend that you go to see this production; you will come out of the small theatre laughing to yourself and feeling that it was definitely a great way to spend an evening.