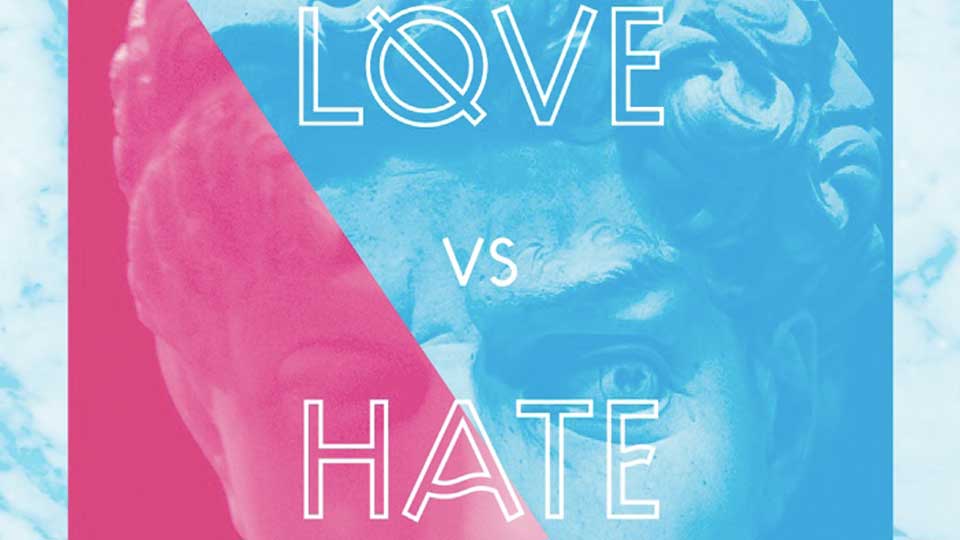 Love vs Hate, by Lonesome Schoolboy Productions, plays this week at the Tristan Bates Theatre near Covent Garden. It’s an evening comprising two one-act plays, just under an hour’s duration each, separated by an interval. The section on hate has an all-female cast and crew, whereas love is all-male.

First up is Wounds by playwright Chantelle Dusette. Falling under the umbrella of ‘hate’, is sees an intense sequence of short scenes taking place in the front room of grandmother Grace’s house whilst her daughters, granddaughter and family friend tear one another apart as secrets and old grudges emerge. Dusette crafts a believable family unit, and the dialogue is the piece’s strength, since all six characters are afforded distinctive voices and air their grievances in unique ways.

Wounds suffers from the writer introducing too many competing issues. The grandmother Grace is universally loathed to a greater or lesser degree by all her daughters (though Ellie Dickens injects a welcome amount of humour into her performance); all of whom have problems of their own, from drug addiction to domestic violence and worries about the acceptance of a homosexual relationship. On top of that the family friend Karen (the often-inaudible Scarlet Sweeney) is hiding a dark secret. With so many stories competing for our attention over a short space of time, Wounds is a little too frantic for its own good. This isn’t helped by a non-linear narrative, where scenes journey back and forth in time, often linked by weak transitions. The structure lessens the impact of the climax, which feels oddly unconvincing, though it makes the perhaps warranted accusation that the older characters are selfish to the point of narcissism.

The second play is Edwin Preece’s To the End of Love, in which six men recount their memories and experience of a recently-deceased young woman; from her brother to her husband, father and even a former boyfriend. Again, the dialogue is often beautiful, but the segment on love suffers from structural problems that are even more acute than Wounds. To the End of Love is framed in such a way that for the most part, the characters are addressing not each other but a psychiatrist. Not only is this quite a tired device, but it’s also undramatic, since it abandons the actors to perform through exposition rather than through interaction, and when there’s limited reaction from the other characters the drama is inevitably stultified.

An undoubted highlight of To the End of Love is an excellent performance by Niall Phillips as Mark, the deceased girl’s brother. He’s funny, truthful, and a pleasure to watch, finding inventive ways of conveying the emotion of the piece.

There’s also a welcome discussion of the topical issues of assisted dying and the alternative medicine racket, but they aren’t picked out and explored very thoroughly, so it’s hard to know the author’s opinions on the subjects.

Both plays suffer from too many characters. Wounds has actors making exits and entrances often with little pretext; whereas To the End of Love resorts to actors who are unused for long stretches standing at the back of the stage with their backs turned. Three, or at most four characters in each piece would have helped to tighten the drama and focus the issues at the heart of them. As they are, both pieces are frustrating near-misses.