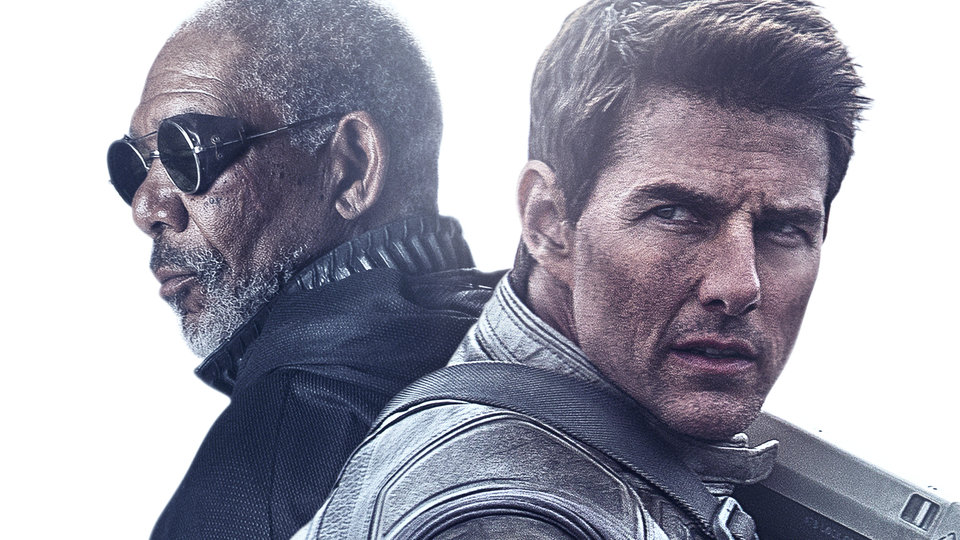 Earth has played host to an intergalactic war, which humankind eventually won. But that victory was not without price. Most of the planet is now uninhabitable and with all of the population now living on space-stations, Earth is a damaged wasteland. Tasked with maintaining the machines that harvest Earth’s biggest remaining resources, Jack (Tom Cruise – Mission: Impossible) scours the isolated planet alone, fending off alien attacks where necessary. But when he starts to question his mission, Jack soon realises that all isn’t as it seems.

Having lots in common with classic sci-fi’s of the past and coupled with a strong visual identity that’s both sleek and functional, Oblivion tries very hard to deliver big scale, hi-brow entertainment to the big screen. Even though the plot flies a little too close to the flame of familiarity, the story still keeps you interested throughout and with a collective cast all playing their part, Oblivion comes in as a predictable but visually stunning spectacle.

Co-Writer and Director Joseph Kosinski gained people’s attention with the criminally underrated TRON: Legacy. His influences, much like Moon’s Duncan Jones, stem from the classic genre movies of the seventies. Oblivion replicates the uneasy but clean dynamic of a utopian existence very well. When the inevitable twist occurs, you won’t be surprised but there’s plenty more going on that will hook you in regardless.

The ageless Tom Cruise continues to amaze in every frame. He is a true star in every sense of the word and I’m fed up of the constant criticism levelled at him. No one can do what he does in Hollywood and you certainly don’t have a career as long as his without possessing some natural charisma.

I hope the haters give him his dues; Cruise is excellent in Oblivion and deserves every credit for making this film such an enjoyable ride. Tom Cruise excels in the stunt department, especially in a chase scene underground that involves gun-play and wire work along with the numerous aerial combat sequences. He also shares a wonderful chemistry with both his leading ladies and makes you invested in their story.

Andrea Riseborough’s star continues to rise and Oblivion is her largest canvas yet. She is excellent as Jack’s partner, both romantically and professionally, and gives the film a nice balance. Olga Kurylenko, who many believed would only have a ‘straight-to-DVD’ career after her stint as a Bond girl, proves the doubters wrong with a good performance here too. There are also noteworthy supporting turns from Morgan Freeman, Melissa Leo and Nikolaj Coster-Waldau.

Oblivion has a strong visual presence (you’d expect nothing less from the director of TRON: Legacy). Everything in this world looks sumptuous – even the barren parts of the planet. The CGI is fluid and the settings are frequently breathtaking. From Cruise and Riseborough’s lush sky-apartment to the giant mechanical machines that are sucking earth’s resources dry, Oblivion is a stunning looking film. Check this out in IMAX for the full effect.

Oblivion will have its critics but there’s a decent sci-fi spectacle to watch here. The story may be familiar but it’s dressed up beautifully and with Cruise and co. all delivering strong performances, Oblivion is a film that’s certainly worth your time and money.