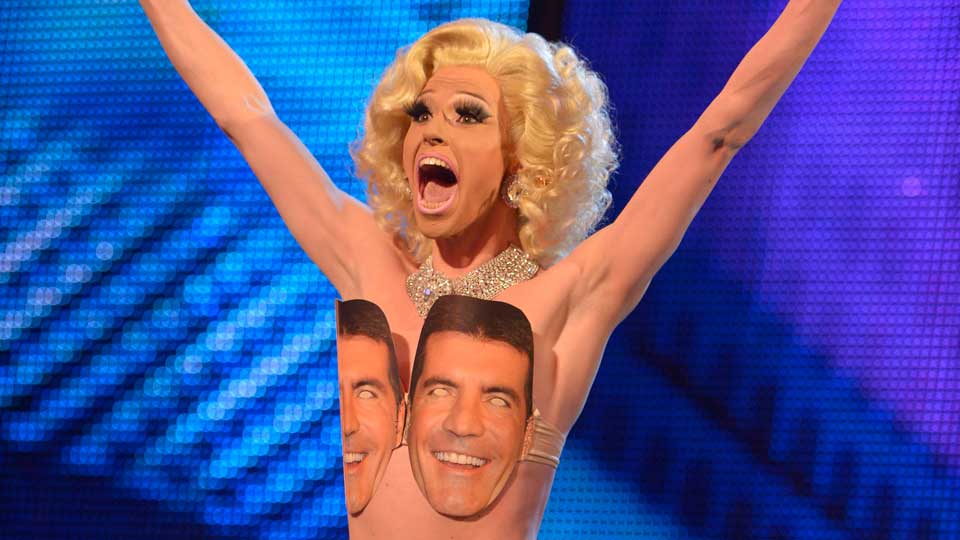 It’s the first episode of Britain’s Got Talent 2013, and we couldn’t be more excited!

All four judges are back, Simon Cowell, Alicia Dixon, Amanda Holden and the fabulous David Walliams, and they are all looking for that special someone.

The first act we saw tonight was country and western duo Two’s Country. They were mother and daughter, Dawn and Cindy. Cindy played the banjo, whilst her mother sang. It wasn’t the most exciting of things, but the audience seemed to get into it with the clapping. After a minute, they received four buzzes from the judges. Simon told them: “It was a bit lifeless, and it looked as if you were asleep.” David thought it was really sexy. They didn’t get through to the second round.

We saw a man playing the triangle, who David thought would be more suited to The Voice UK. A man emulating a dog came on stage, and was unsuccessful.

Pastor Patrick George, who described himself as a ‘Gospel Choir’ came to audition, and we were very intrigued to hear him. He surprised everybody and revealed that he wasn’t by himself. He actually had a choir with him, and they were called Gospel Choir Incognito. They were full of rich voices and sang very well. They received four Yes’ from all four judges. We loved them!

This year, comedian’s were out in force! We saw many, including mental health worker Colin Smith, who didn’t get through, Jonathan Hines, 25, an admin worker was also shown the door. 21 year old student Paul Stark thought he’d be luckier than the others, and walked on stage with confidence. He didn’t impress, with the audience shouting ‘Off’ at him. Simon summed it up and said: “Those were one of the worst jokes I’ve ever heard.”

Fourteen year old Jack Carroll came on stage, and had the audience loving him from the first moment. He has Cerebal Palsy, and was in a wheelchair. His goal was to bring joy to people. He told the audience and judges that he usually did gymnastics, which had everybody laugh along with him. Jack then proceeded to tell jokes with such ease of a professional. He was great! We’ll see him in the next round!

Second day of auditions saw Simon ill with a cold, therefore there was only three judges starting it off in Manchester. First up was 21 year old dentist Sia. His act was interesting, he was a dancer, and received three Yes’! Viva Elvis was a dance troupe, and they also got through! 57 year old Martin Healey came on stage, and it was evident from the first moment that he was different. He was wearing a vicar’s suit, with a puppet in his arms. They danced to the Sound of Music and received a lot of applause from the audience. David didn’t like him, but Alicia and Amanda loved him!

Simon did turn up for the afternoon though, apparently after hearing the other three judges were putting random and odd acts through. The first act to face him was eleven years old Alinsandra who was there with her parents. She sang One Night Only by Jennifer Hudson. Alinsandra had a big and powerful voice, and got Simon’s attention straightaway. She received a standing ovation by everyone and a thumbs up by Simon! He said: “OMG! That wasn’t you singing wasn’t it? You are superhuman! Its one of the best auditions we’ve had so far.” Amanda told her: “You lifted the roof out of this building.” Alinsandra got through!

Simon was then treated to a lap dance by Kerry Graham, who received a tremendous applause from the audience, and all four judges gave her the thumbs up! When she got on stage, she told the room: “I’m going to do exercises on a chair.” Dressed in a dowdy outfit, people weren’t expecting much from her. Kerry then stripped off to a tank top and shorts and mesmerized the audience. She said: “That was a tame version there’s plenty more to see!”

We also a lot of love in this episode, with Vicky Vivacious, a 26 year old drag Queen who came out with Simon’s head on her bodily parts. Simon said: “I really don’t know what to say about that!” We saw David loving the doggy contestants. Piano player James Heaney, 25, sang a song about David and Simon, which brought the house down! Lyrics included “Simon doesn’t love you as I do!” He received a hug from David, but sadly that wasn’t enough to get him through to the next round.

The competition draws acts from all over the world. Tonight, we met Marina, 47, from Italy. Marina was a singer, and went behind a black screen to change into different characters for every song she sang. The judges weren’t impressed. Edgars, from Latvia, played the accordion and was booed off stage. Alexei from Amsterdam was there to sing, but his singing wasn’t great. Amanda said: “It was rubbish really.” A dance troupe from Hungary then came on stage, and said:  “We decided to enter this competition because it’s the biggest talent show in the world.” The Shadow Theatre, as they were called, rehearsed every day and night and were passionate about their act. They all went behind a screen, and danced like shadows. It was great! They got through.

With the competition stronger and tougher than ever, all the acts were very nervous. Hayley, 28, crumbled under the pressure, and forgot the words to her song. Grant Reeves, 24, a barman, also forgot his words, and was gutted. 28 year old Alice was so scared that she didn’t bring anyone with her. Stage fright had plighted her all her life, and she was determined to succeed this time round. Alice sang My Funny Valentine. Starting of a bit shaky, she soon got in her stride and had the attention of all four judges. What a voice! We have our money on Alice to win the competition! She got through without any hesitation. Simon told her: “Your voice is like liquid gold!”

What a fun first show that was! We loved it!

Britain’s Got Talent continues next Saturday on ITV.