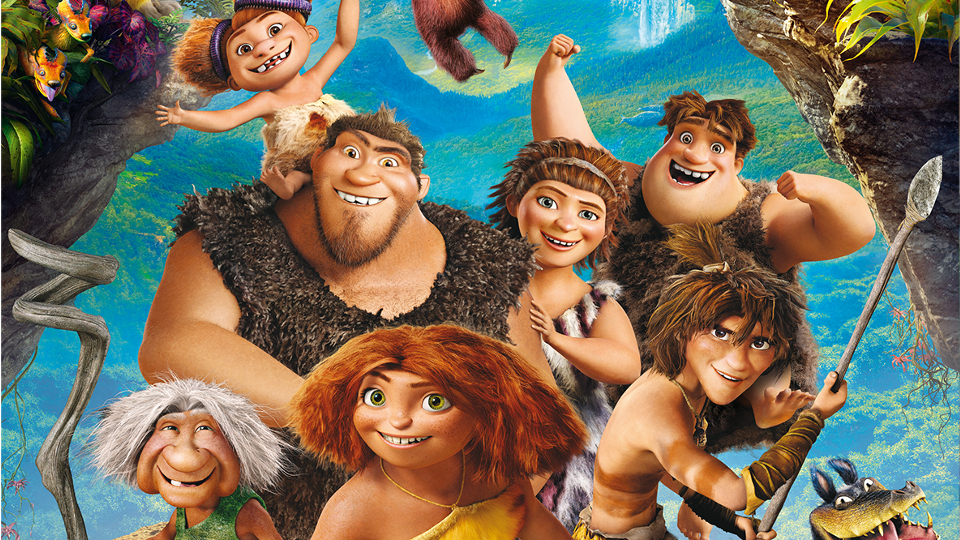 Last month DreamWorks Animation released their latest computer animated film The Croods. The film is a comedy adventure set in a fictitious prehistoric era known as the Croodaceous period. It follows the journey of a family of Neanderthal Cavemen after their cave is destroyed.

The Croods: Prehistoric Party is a video game based on the characters of the film. It doesn’t follow the plot of the movie but instead aims to provide a fun party game aimed at families. To help with this review of the Wii version of the game I recruited the help of my 10 and 11 year old daughters. For some reason film tie-ins never seem to turn out all that great and I’m sad to say this is another game that follows that trend.

The game features a collection of 30 mini-games designed for 1-4 players. These can be accessed on their own via the quick game mode or players can opt for a mini-game tournament where they face-off over a variety of games. Initially many of the mini-games are actually locked and you need to earn Prehistoric Points in the main game to unlock them. There is also a picture gallery where you can unlock concept art and stills from the film.

The main game is similar to Mario Party where players take turns to move around one of five game boards. Each board features a different theme based around locations of the movie such as Desert, Gorges and Jungle. There are two different modes available which are Trailblazer and Hunter-Gatherer. In Trailblazer players compete to be the first around the board while collecting shells. Hunter-Gatherer is very similar but players must also collect eggs and you can set a time and/or turn limit as well.

Players who have seen the film will be familiar with the characters and will like that they can choose to play as their favourite Crood family member – Grug, Ugga, Eep, Thunk, Sandy, Gran and Guy. If you haven’t seen the film though it doesn’t matter as they all play exactly the same. If you don’t have a full party of players then the game AI takes over the others.

Players take it in turns to roll a six-sided die and on screen you can direct the direction that your character will throw it. After throwing the die tends to fall off the board or go out of the edge of the screen. The reason for including this odd rolling mechanic seems to be for the use of a power-up that allows you to push players back if your die hits them.

After rolling you are shown the result of your roll and the games moves your character forward that many spaces. Most spaces in the game feature symbols and until you’ve played a few games aren’t all that obvious what they are. Thankfully there is an option in the pause menu which lists each space type. Some spaces reward you will shells, others take them away from you. There are also spaces for things like mini-games, power-ups, inventions and hazards. Landing on a hazard might see you topple from the board or be pushed off by Ram/Emu hybrid creatures called Ramu’s. A hazard space will reset your turn.

The board game portion of the game is rather slow-paced and quite boring. There is little to do other than rolling the die and occasionally activating a power-up or choosing an alternate path. The most excitement comes when someone lands on a mini-game space. This gives you a random choice of three mini-games to play against the other players.

The mini-games are all very simple in nature and the ones I played were all free-for-all with no team games on offer. For a game like this to shine the mini-games need to be really good but the selection on offer here are really poor. There’s a nice variety with prehistoric takes on racing, sports and classic games but the games just aren’t fun at all and many are very frustrating to play.

The game has an obsession with using the Wiimote horizontally for many of the games. Even when you hold it normally it still relies on the face buttons. The games offer little instruction apart from which way to hold the Wiimote and don’t take advantage of the motion capabilities. I play a lot of games and found it confusing at times to know what was going on.

My kids found the games even harder to get to grips with which spoilt the fun. In most cases I also seemed to have a huge advantage over them. A title like this shouldn’t just rely on skill and should be much fairer to allow players of all skill levels to compete. The addition of motion controls would have really helped in this case.

Many games seem to rely on reflexes and one area which was really surprising is that when you have AI controlled players they are far too hard to play against. For the most part I was able to hold my own against the AI but the kids had no chance which ruined the fun for them completely.

In between games the menu system that the game uses is over complicated. It requires you to press an arrow at the bottom of the screen every single time you select something. The menu screens are clumsy, unintuitive and bad interface design.

Another really weak area of the game on the Wii version we tested was the graphics. The Wii is really showing its age but at the end of its life you would expect to see some of the best looking games on the platform. This isn’t the case here with incredibly low-poly characters and environments, poor textures and a horrid blurry look to everything. The screenshots here actually look a lot nicer than the game does in action and I suspect they may be from the Wii U version.

Young fans of The Croods will probably be keen to get their hands on The Croods: Prehistoric Party. Sadly those that do are likely to be very disappointed. Younger players will find the game frustrating and too hard while older players will be bored to tears. This is one of the worst games I’ve played in quite some time. If you’re keen to spend more time with The Croods I suggest heading back to the cinema or waiting for the DVD/Blu-ray release.