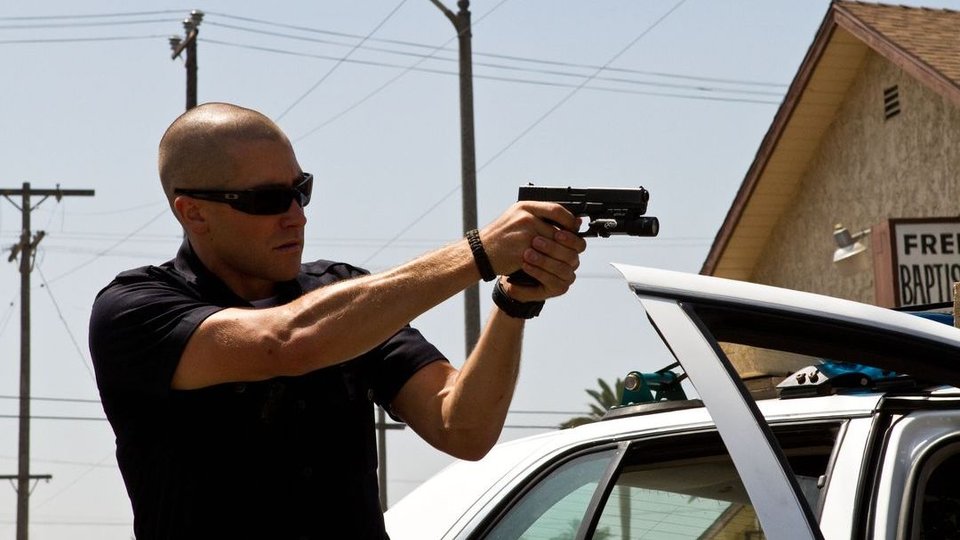 Officers Brian Taylor (Jake Gyllenhaal – Prince Of Persia) and Mike Zavala (Michael Pena – Gangster Squad) take to the streets of LA to fight bad guys and make the neighbourhoods safer. Brian decides to film every minute of their day on a camcorder. He plans to film the day-to-day of being a Police officer so that he can make a documentary in the future. After an unexpected arrest lead to big money, firearms and drugs being seized, the cartels now look to put out a hit on the cops responsible.

You’d be forgiven for thinking End Of Watch is just another cash in on the found-footage genre (that is currently enjoying an extended run in the horror genre). As the opening frames of the movie ran, I genuinely felt like this film was going to give me motion sickness. Thankfully this settles down a great deal and instead leaves us with a remarkable gem of a cop story that will leave you shaken and stirred.

It’s easy to underestimate this style of film-making as a fad but End Of Watch is the perfect example of how to do these types of movies well. A wonderfully absorbing story mixed with fleshed out characters make the film one of the best crime dramas you’ll see all year. Playing out as a feature length Southland but with a darker and harder-hitting core, End Of Watch is a must-see for any US crime fans.

Jake Gyllenhaal leads the line very well and shares top billing with the always reliable Michael Pena. Both easily convince as surrogate brothers who walk the front line in LA’s war on drugs and gang-related crime. The severity of the situation is never underplayed but at the core of every scene is the relationship between these two young cops and their respect for one another and their job. The film also isn’t afraid to throw comedy into the mix and it works a treat.

Police dramas are common in Hollywood but it’s been a very long time since the buddy-cop ideal has been so effective. The film isn’t afraid to dabble with humour and the naturalistic feel of the dialogue between Pena and Gyllenhaal (whilst they drive around LA on patrol) lends the film a great deal of credibility. It all feels natural and genuine – especially when it comes to the end of the film as their situation grows more and more perilous. With David Ayer’s keen eye, both actors hand in the performances of their careers.

End Of Watch is a gripping drama that will have you at the edge of your seat throughout. The pairing of Gyllenhaal and Pena is simply superb and fully engages you into this gritty and realistic cop thriller. With style, suspense and break-neck action, End Of Watch is one of the highlights of last year and a true masterpiece of the urban crime genre.