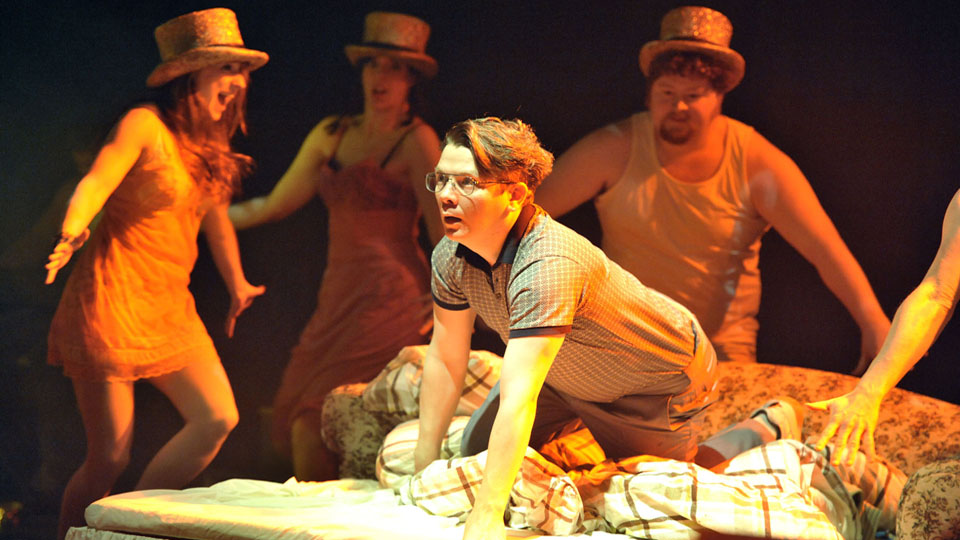 Doctor Faustus tells the story of an intellectual who is bored with life and signs away his soul in order to enjoy the pleasures of fame, wealth and magic. Faustus’ pleasure comes at a price, however, when Lucifer himself finally calls in the credit and damns him to Hell. Can Faustus reform and escape his contract?

Doctor Faustus makes an immediate impression with is its visual presentation. A simply dressed stage with a sofa bed centrepiece is bracketed by rows of bulb-framed dressing room mirrors. Bringing the backstage of the theatre to the downstage of the auditorium, characters “rest” prior to becoming involved in the play. From its opening moments, Doctor Faustus is a show which aims to subvert the norms of theatre to take audiences to a world beyond that of the cyclorama to the very precipice of the underworld, where the glitz of scenery is eroded to reveal hidden backstage horrors.

Marlowe’s Elizabethan dialogue could well seem anachronistic in a modern-day setting, however Dominic Hill’s direction, with inventive use of props, grounds performances within a world of identifiable symbols and associations. Faustus’ laptop, for instance, is the focus of much of his furious soliloquy and his address to the impassive screen about his desires feels wholly authentic. Equally, his boozy associates are well realised as slobs with cans of discount lager. Accessible in performance if not always in verse, the play’s unique presentation provides visual identifiers for modern audiences whilst also providing a transition into the middle acts which are written in a naturalistic, contemporary style.

Teevans’ reimagining of the middle portions of the play place Faustus and Mephistopheles in a “backstage” environment during a lucrative tour, culminating in a gig in Las Vegas. With social satire that is excellently observed and wholly topical – there’s even a gag about the Pope retiring – Vegas becomes a land of pleasures and dreams, yet at a price beyond mere dollars and cents. Much of the comedy is also increased in this episode, ranging from gallows humour to outright slapstick. An impressively aesthetic touch is the inclusion of magic tricks and effects, from floating glasses to flaming books, culminating in a superbly choreographed parade of magician’s clichés and campery.

The closing act is arguably the most fascinating, not only in terms of revealing Faustus’ ultimate fate, but exemplifying how Teevan’s writing and Hill’s direction have almost imperceptibly reintroduced Marlowe’s dialogue into the drama. The comparative levity of previous acts also serves to energize the classical dialogue into a heightened state of foreboding with Satanic intonations which are chillingly believable, resonating centuries old verses of authority. Mirroring Faustus’ soliloquy in the opening scenes, the play’s reversion to Marlowe’s dialogue brings the play full circle, with classical dialogue resounding powerfully in a denouement which is raw and shocking.

Doctor Faustus is buttressed by excellent performances. Siobhan Redmond’s Mephistopheles as part temptress, siren and alien is stunningly dignified and seductive.  Constantly changing costume and form with an indistinct foreign identity, Redmond is consistently enigmatic, exuding a dangerous inner power. In perfect contrast, Kevin Trainor as Faustus is a supercharged geek with OCD and delusions of grandeur. Obsessive, passionate and exhaustively intense, he could be the offspring of Bill Gates and Derren Brown. Maintaining a vibrancy which is likeable whilst loathsome  and pitiful in the extreme, Trainor is arguably the perfect realisation of Faustus, exposing the facets of greed, torment and human fragility in fervent flashes.

Doctor Faustus is an ambitious punch of modern theatre which will leave its audience asking questions. The stagecraft has a rawness and fringe flavour; a final reveal of the real backstage – complete with a rigger’s talescope brazenly on show – remains a mystery as to whether it was fault or design, yet it certainly contributes to the peeling away of Faustus’ worldly reality. In this way, the play continually tricks and surprises, almost attempting to offend those who place tradition over progress. Experimental, daring and constantly challenging, Doctor Faustus is an audacious and bold foray into a classic work which is ultimately a hell raising experience. Often bizarre, unsettling, proactive and hilarious, it succeeds in showing a dark classic in a new light.