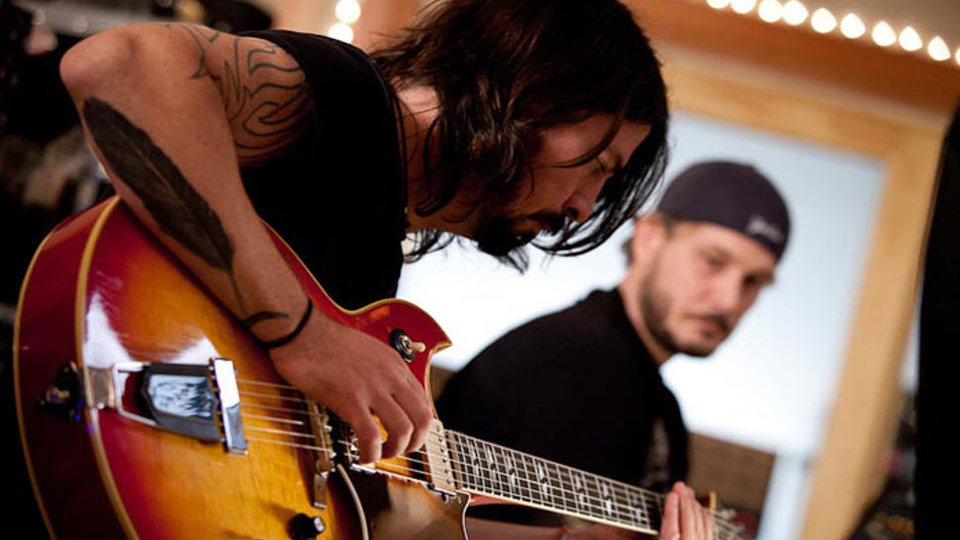 Foo Fighter’s lead singer Dave Grohl is making his directorial debut with the documentary film about America’s Sound City recording studio, which is set deep in the San Fernando Valley and was the birthplace of some of Rock’s biggest albums. . Fleetwood Mac, Neil Young, Rick Springfield, Tom Petty, Nirvana, to name but a few, all recorded within Sound City’s walls. In support of the release of the documentary Dave Grohl and his guests took the stage at a secret gig at the Forum and we were there.

Dave Grohl welcomed to the stage a selection of guests last night all in honour of Sound City. The show kicked off with some mellow tracks, which were biffed up by some heavy guitar riffs. Alain Johannes was the first guest to take the stage and graced us with his undeniable talent. We heard All My Friends which went down a treat and really gave the show a good start. The guitar was soaring and Grohl complimented it with some heavy bass lines and Taylor Hawkins was working his drums like a devil.

It wasn’t the Dave Grohl show and that made it somehow special, Grohl spent sometime between each set talking about the label and talking about his guests, who were all absolute legends, of course. There was a real sense of connectivity and intimacy something the Foo Fighters’ frontman has mastered over the years. Chris Goss came on to the stage next and played a few tracks by Masters of Reality. We were still very much enjoying blues rock with Goss who gave young rockers a run for their money. Time Slowing Down was particularly good and had some pretty impressive guitar riffs. There was so much energy coming off that stage and everyone seemed to genuinely be enjoying themselves. The band also swapped over instruments showing just how talented each of these artists are. Grohl played bass, which he swapped for a guitar and even played the drums at one stage. It was all very special indeed.

What was good became even better! More special guests included Lee Ving from eighties punk band Fear. This part of the show was truly special as Fear never toured in England (said Ving). We loved how the mood of the room changed all of a sudden and the punk really lifted people’s spirits. There was so much energy coming off the stage and everyone was shaking their hair and moving to the drum beat. Not that many people were jumping about but that is because the crowd was of all ages and with a lot of people who probably were teenagers when Fear was still around…

Busy rocker Ricky Springfield also made an appearance. His set was light spirited and the complicity between him and Dave Grohl was just great. The guys kept on making jokes and being genuinely fun to watch. Springfield looked great and had amazing sex appeal on stage. He played a selection of his rock tunes including Love Is Alright Tonight and Love Somebody but the track that everyone was hoping to hear and cheered the most for was Jessie’s Girl. It was worth the while and Springfield really showed tremendous showmanship and instrumental skill.

Taylor Hawkins also had his moment stepping in as the frontman he looked great topless (oh yes!). Grohl introduced him as the best frontman he knew and Taylor proceeded to sing a few songs including a cover of I Want You To Want Me by Cheap Tricks, which everyone sang along to.

The biggest cheer of the night was for Krist Novaselic, who really tied up this night and made it all the more special.

Dave Grohl finally stepped in for the last song and everyone came back to the stage for the great finish.

Dave Grohl’s Sound City special gig at the Forum was nothing short of amazing. We enjoyed every minute of it and everyone there did so too. It was a truely special event with some of rock’s biggest legends. Everyone present will remember this gig that we know.