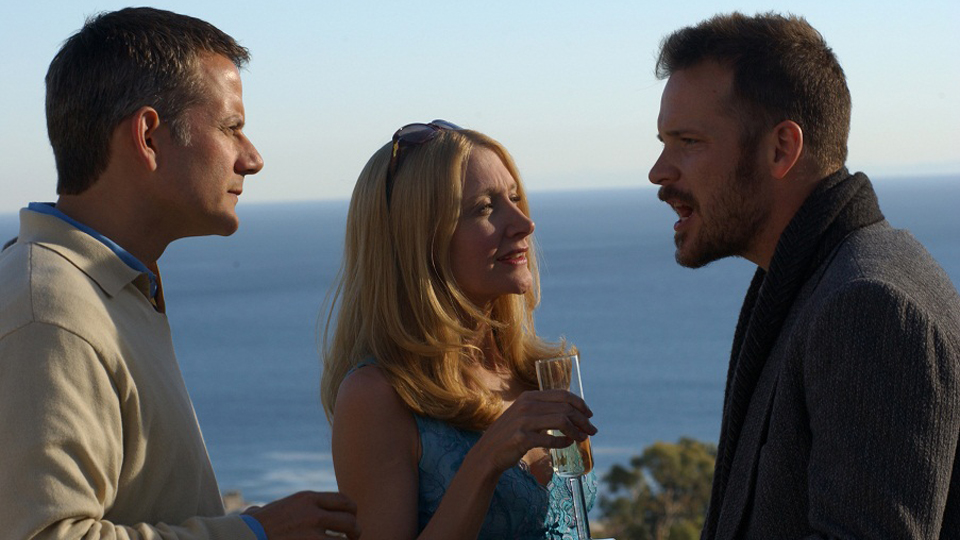 For our first instalment of Celluloid Closet in 2013 we’ve selected a little gem that you may not have come across. The Dying Gaul is a tale of determination, manipulation and lust that escalates into a darker tale than you expect from the outset. Written and directed by Craig Lucas, the film was released in 2005 and stars Hollywood actors Peter Sarsgaard, Campbell Scott and Patricia Clarkson.

The Dying Gaul tells the story of screenwriter Robert (Peter Sarsgaard) who is mourning the loss of his partner to AIDs. As he deals with his grief he shops around an autobiographical screenplay that captures the attention of Hollywood mogul Jeffrey (Campbell Scott). After Robert is convinced by Jeffrey that his screenplay needs rewrites, most notably the replacement of the central gay relationship with a heterosexual one, he moves into the house Jeffrey shares with his wife Elaine (Patricia Clarkson).

Soon Robert finds himself to be caught up between Jeffrey and Elaine as the husband and wife compete for his attention. Jeffrey unsubtly hits on Robert and works him down until the pair embarks on a sexual relationship whilst Elaine’s jealousy spirals out of control and she begins to mess with Robert’s mind using the death of his partner as her trump card. Robert soon begins to feel himself spiralling out of control unaware of the game that Elaine is playing whilst allowing Jeffrey to take advantage of him.

Essentially The Dying Gaul is a cautionary tale about the lure of Hollywood and the dark side of the industry that is often swept under the carpet. The glittering, glamorous façade of Hollywood that we often see is certainly not present in this movie. The story that unfolds is a dark one where none of the characters are particularly sympathetic or end up achieving what they set out to in the first place.

Robert is the only one you feel vaguely sorry for and that’s because his grief is being taken advantage of by Jeffrey and Elaine. You stop sympathising with him at a point though when he gives in to Jeffrey’s advances and begins their affair. For Robert he’s just looking for love and affection to replace what he lost when his partner died. He selfishly doesn’t consider Elaine or the couple’s children which is the reason you lose sympathy with him.

Elaine on the other hand is the most unlikable character, played deliciously by Patricia Clarkson. Even though she is the woman scorned, her actions are so awful that you can’t find it in your heart to take her side. She manipulates Robert in a much worse way than her husband engaging with him via an online chat room making him think he’s talking to his dead lover. She takes everything out on Robert rather than her husband and messes with him mentally knowing that he is already unstable.

Jeffrey is perhaps the most complex character in the film. He claims to be bisexual and jokes about killing his wife when he’s with Robert. His behaviour is fairly aggressive throughout the film and he knows how to use his power to get what he wants. Do we believe half the things he says? Absolutely not. He’s the kind of character who’d sell his granny if it furthers his desires and ambitions.

Director and writer Craig Lucas crafts a tight, intense and enjoyable story with The Dying Gaul. Adapted from his own stage play the movie is one full of strong performances and a believable story. His direction is arty using the environment around the characters and a variety of techniques to ensure his unique style is present throughout. It makes for interesting viewing and adds to the overall atmosphere of the film.

Lust, manipulation and betrayal are things that have been captured on film time and time again. We don’t think we’ve seen any of them portrayed in quite the way they are in The Dying Gaul though. This film is one that’s intense with varying shades of darkness throughout elevated by magnificent performances and strong direction. If you haven’t seen this gay classic then you really should look it up.

The Dying Gaul is available on DVD now through TLA Releasing.