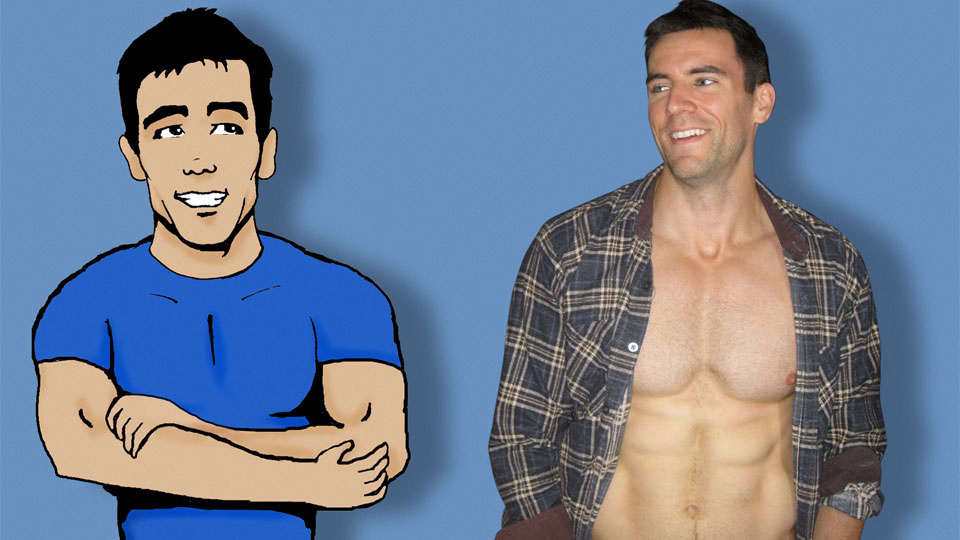 Actor Cuyle Carvin has built quite the acting credentials with appearances in Law & Order: Special Victims Unit, NCIS and The Bold and the Beautiful to name a few.

For his latest project he’s teamed up with artist Fred Grandinetti to create an educational book for children called A Cuyle Carvin Coloring Book.

We caught up with Cuyle to talk about the project, find out where the idea came from and to talk about his impressive career to date.

Hello, Hello, Hello! Things are great, 2013 is off to a fast start out here in Los Angeles.

You’ve collaborated with cartoonist and writer Fred Grandinetti for A Cuyle Carvin Coloring Book. Tell us about the project.

It’s a cool spin on a coloring book – it’s educational and you can draw on my face all in one place! The coloring book has a cool little narrative that follows a young boy who watches too much TV. The boy is watching a movie and he sees me (Cuyle Carvin) on screen and tells his mom how he wants to be like me. I pop out of the TV and teach the kid how to be healthy and active so that one day, he can be just like me. Basically, it’s a little hint and nudge to try and get kids out of the house and away from all the technology that dominates our lives.

How did you come to be involved with the project?

I had been working with Fred for a bit on various projects including his award winning Cable show, Drawing with Fred – and we thought about what we could do that would help reach children on an educational level (and in turn some adults) and at the same time create a unique product to promote Health & Fitness and also me as an actor and Fred as a children’s educator.

Healthy eating, for all ages, is a discussion point across the world. What kind of reaction have you received in response to the coloring book?

People love it. It’s generated a very positive reaction and it’s been requested and distributed to children’s hospitals, schools and other educational businesses.

Have you got any more projects lined up with Fred in the future?

Fred and I have many things lined up – he comes up with a new idea every day and we go back and forth a bit on what could work. Currently we have a good four or five projects in the mix. Fred is super patient with me, because of my schedule I can take a LONG time to do my part in the project. But once we get something done, it’s usually a fun project with an educational spin.

Let’s talk a bit now about your day job. You’re an actor and you’ve got quite an extensive CV. What has been your favourite role to date and why?

This is always a very tough answer to find. I’ve had so much fun and so many favorite roles and projects, I don’t really know if I could choose just one. There are some characters I’ve enjoyed the best, including Karl in Fog Warning, Braden in Alien Opponent, Fred in The End of Something – each for a different reason. Karl because he was such a bad man – a murderer, rapist, liar, thief – all the things that are so different than myself so it was fun to let go of moral and social rules. I enjoyed Braden because he was such a dumb and caring nitwit. Fred was great because he was the most like me as a character that I’ve ever had the opportunity to play. I always make new friends and contacts on each project and the experiences I have as an actor – the places I get to travel, the people I meet, every day is different – it’s incredible and I’m so fortunate and thankful for it all.

How did you get into acting in the first place?

It was a fluke!! In college I took an Intro to Theater course and I thought it was kind of cool and so I then signed up for more theater classes. After college I moved to New York City to see if acting was really an interest or not, I got involved in different classes, workshops and it all began.

What do you have lined up next in terms of acting?

I have a couple of web series in production – Revelations – www.RevelationsTheSeries.com and MoonBound24 – http://www.moonbound24.com

I also produce and direct films with my production company – www.BytheCproductions.com – and I’m very busy with projects there all the time also. Our new trailer for our next film was just released last week:

What would your ideal role be and why?

I want to be a hero! I die in so many films, sometimes in a heroic way with heroic characters, but I want to be the hero in a fantasy film or a epic war film. Something like Aragorn in Lord of the Rings or William Wallace in Braveheart. I love anything fantasy, sword fighting, medieval, castles, etc… I want to play a character with a noble and valiant cause. My favorite films are those that have characters that are often faced with insurmountable odds but have the heart and will to make things right in the world. I want this kind of role because it’s the   moral being of these character that I strive to have in my own life.

What else can you tell us about your plans for 2013?

It will be a busy year for Television appearances and I have a few movies coming out this year. I like to encourage people to follow me if they’re interested on www.CuyleCarvin.com, Twitter, Facebook, etc. By the C Productions will also keep me busy as we have three or four projects in various stages of production now.

You can keep up-to-date with Culye by following him on Twitter @CuyleCarvin, liking him on Facebook www.facebook.com/ActorCuyleCarvin or visiting his official site www.cuylecarvin.com Find out more about A Cuyle Carvin Coloring Book by watching the video below:

In this article:Cuyle Carvin, Fred Grandinetti