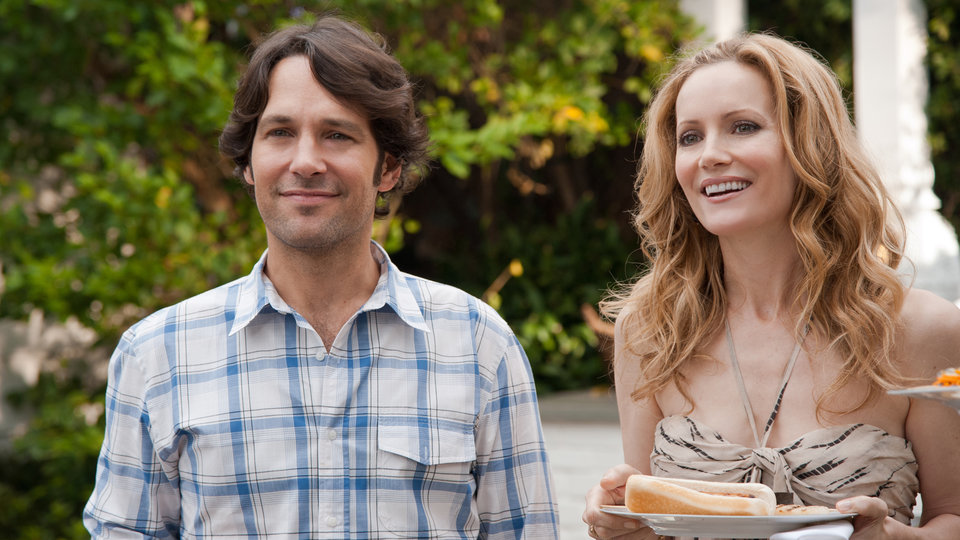 Pete (Paul Rudd – I Love You Man) and Debbie (Leslie Mann – Funny People) are both nearing their 40th birthdays and are handling it in different ways. Along with the trails and tribulations of married life both are struggling financially – Debbie with thefts from her shop where Desi (Megan Fox – Transformers) and Jodi (Charlyne Yi – Knocked Up) work and Pete with a steep decline in his music management company. The problem is made worse by Pete’s father (Albert Brooks – Drive) always mooching off them. Maybe Debbie’s estranged father (John Lithgow – Footloose) could help?

This Is Forty, the ‘sort-of ’ sequel to Knocked Up, is penned by comedy golden boy Judd Apatow. It’s a more rewarding watch than its predecessor thanks to a more involving storyline that doesn’t rely on gross-out humour. It instead focuses on the intricacies and daily struggles of married life.

Seth Rogen and Katherine Heigl don’t appear in This Is Forty but their characters are mentioned, as do many other secondary characters from Knocked Up. This time around, we focus our attention to Paul Rudd and Leslie Mann’s characters Pete and Debbie.

The film resists the temptation to create needless drama for the sake of it. This is a comedy that’s happy to peculate on its own simplicity and by extension this means that This Is Forty becomes a far more engaging watch. The comedy stems from everyday situations and problems we all face – trying to deal with financial situations, hold a family together, keep an air of mystery in relationships etc.

Paul Rudd has fast become Hollywood’s go-to guy for romantic comedy and is excellent in This Is Forty. The popular Clueless star shares a brilliant chemistry with Leslie Mann and the two easily convince as a married couple looking to reignite that spark. This is Mann’s best role to date too – she is handed a far bigger role In This Is Forty that tests her range a lot more.

The supporting cast are all great with Albert Brooks and John Lithgow the picks of the bunch as Pete and Debbie’s respective Dads. Chris O ’Dowd, Apatow regular Jason Segel, Michael Ian Black and Melissa McCarthy all hand in noteworthy performances as well. Iris and Maude Apatow (Judd and Leslie’s kids) do a fine job as squabbling sisters too.

The luscious Megan Fox is brilliant in the film and proves the haters wrong with a very savvy performance. She also bounces off the delightfully off-beat and hilarious Charlyne Yi really well as shop assistants who hate each other. Having now pitched her tent to the Apatow stable will hopefully mean Fox gets a better class of role offered to her in the future. She clearly has talent to go with the looks as This Is Forty and the criminally underrated Jennifer’s Body has proved.

This Is Forty is a great comedy that has a lot to offer audiences. With hilarious set-pieces, an amazing comedic cast and some genuine heart, it’s a delightful return to form for Judd Apatow. You’ll love the gags, the situation comedy and the general vibe but you’ll stay for the heart.