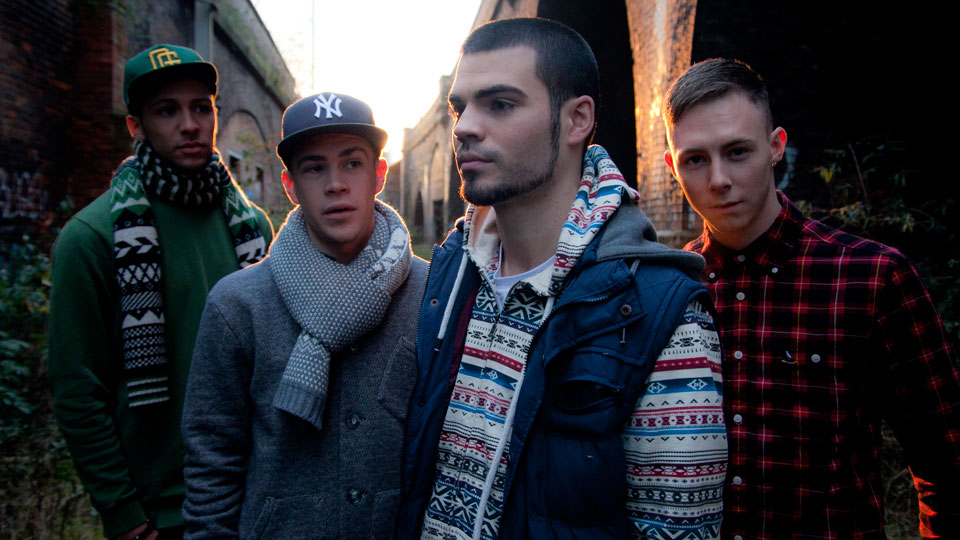 The Mend first came to our attention when they appeared on last year’s series of Britain’s Got Talent. After building a buzz early on, the band finished in third place and built up a strong fanbase.

Following the show’s end Jay, Craig, Kris and Dean decided to set-up their own label and recently announced the release of their debut single Where Were You on 24th March. The guys are also currently on the road supporting X Factor 2011 winners Little Mix.

We caught up with the guys to chat about Britain’s Got Talent, find out what the Little Mix tour has been like and to discover their plans for the year.

How are you guys doing today? What have you been up to so far?

Kris: It’s been a roller-coaster. We’ve been together now for 4 years so to tell you everything would take too long but in a nutshell we spent the first two years learning how to write and perform together and the last two years writing with various producers and getting out there gigging. We started off doing schools and clubs but just recently we’ve been on tour with Little Mix and thats been amazing. We are all buzzing this is what its all about. Singing your songs to a big audience is just the biggest thrill and being on the road with all the tour crew who are all so pro we are all loving it

You’re currently in the middle of the Little Mix tour. How has that experience been so far?

Jay: We know the Little Mix girls personally and they invited us to do the tour a while back but we didn’t know if we could afford it. After BGT we were offered a modest singles deal by Sony but the guy was more interested in exploiting the BGT appearance than what we had to offer as a band and we all felt uncomfortable with it so we declined the offer. Sony were really cool and let us do it ourselves on our own label.

What has life been like since Britain’s Got Talent? Have you gotten used to the fame and the industry yet?

Dean: I don’t think we are famous and I don’t think any of us are doing this for the fame or the money. We do it because we love it we love music and we love performing. Naturally if fame and money comes along I’m not going to complain but its not something we think about as a band. BGT has made our lives a bit easier – its given us a bit of a leg up I suppose and that’s all you can ask for.

You’ve been busy working on your debut album and your first single Where Were You is out soon. Tell us about the inspiration behind the track.

Craig: We try to write songs that a relevant to kids in our situation. Where Were you is a love song about a relationship thats gone sour – we try to keep it real it even has a reference to facebook in it!! All our songs try to tell it like it is but we do try to be a bit inspirational we have a rapper in the group but our subject matter isn’t wealth and guns and bling like I said we try to write songs people can relate to.

What can fans expect from your debut album?

Kris: Lots of songs that make you want to dance or sing a long and a few songs with a message about hope for the times we are all living in. We donated the royalties from our debut single to the family of Anuj Bidve, the Indian guy that was murdered by an idiot in Manchester last year. We did that cos we wanted something positive to come out of our success and we weren’t going to tell anyone but then we realised talking about it would make people see that lads like us – we’re not all bad like the low life that murdered Anuj. Just because we wear hoodies and trackies doesn’t mean were are wrong ‘uns.

Give us some insight into who you’ve been working with so far? What’s been your favourite collaboration to date?

Jay: We’ve been working with Eliott Kennedy in Sheffield, the guys is a genius and we all learnt a hell of a lot from him and Naughty Boy too he’s really cool and we wrote a song called Let It Go with Emile Sande. Its hard to pick a favourite out of that lot they are all sick for different reasons.

How would you describe The Mend to someone who has never seen or heard you?

Dean: We are all mad! No seriously I guess you could call us an urban pop act – a male vocal group with a rapper whose musical influences are early soul classics.

Looking back at your time on Britain’s Got Talent is there anything you would have changed?

Kris: I think we should have done our own material. We thought it was safer to do covers but last year there was an emphasis on people writing their own stuff and we missed out on that. Oh and being the wild card on the show gave us like no time at all to prepare for the final it was like here’s your song, you get a day to rehearse it and bang your on live TV so that was a bit of a disaster but like I said we are not complaining, we are just grateful that someone gave us a break.

What advice would you give to someone who was thinking of going down the TV talent show route?

Craig: You just got to go for it. We originally went for X Factor and we were told we could do that show with a manager and then ITV found out and said they couldnt just change the rules so we had to come off that show and do BGT. People thought we were mad doing any TV talent show but the fact is the labels are only signing acts that are coming off the big TV shows so we had no choice. We didn’t get a deal at the end of it but our earnings went through the roof and we were able to use that money to release our own song on our own label so we are grateful to BGT for putting us out there and giving us a profile.

What are you hoping 2013 will bring you?

Dean: We hope people in the industry will give us a chance. We haven’t got a big record company behind us with loads of dough so its hard getting noticed but we will just keep working hard and with a bit of luck we think we can get there. Fingers crossed.

The Mend’s debut single Where Were You is released on 24th March.

Interview: The 411 Talk About Performing At Mighty Hoopla and Why They Give Props To Little Mix