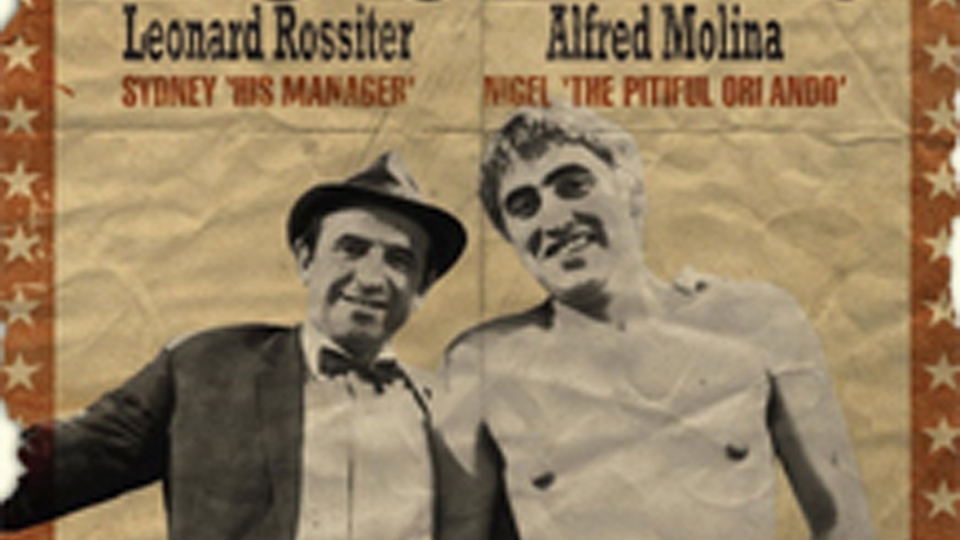 The late 1970s and Leonard Rossiter is one of the biggest names on British TV thanks to smash-hit comediesRising Damp and The Fall And Rise Of Reginald Perrin. Not many people remember the other sitcom that came his way in 1978 – The Losers for ATV.

It’s hard to imagine even as late in the day as 1978 that television was still considered an ephemeral medium, since the original master tapes of The Losers haven’t existed for some time. This release from Network DVD is nothing short of miraculous, as it salvages not only a vintage Rossiter performance but Alfred Molina’s first television outing (a few years prior to his big break in Raiders Of The Lost Ark. He’s been doing rather well for himself in Hollywood ever since).

That said, only five of the six episodes still survive (it was a short-lived series) with the final one represented solely by PDF script. Watching the five twenty-five minute instalments that comprise this release is like stepping back in time to the age of VHS, since the low-resolution picture is a transfer from an off-air video recording. It’s great to be able to see five sixths of this series at all – but picture quality purists beware.

The question remains as to whether or not it’s actually any good. Certainly Leonard Rossiter and Alfred Molina are actors always worth watching, since they never give less than their all, and Rossiter is one of the greatest comedy character actors the UK ever produced. However both terrific performers are rightly remembered for other projects ahead of the largely-forgotten The Losers.

It’s not that The Losers isn’t funny – there are plenty of isolated decent jokes – it was, after all, written by the late Alan Coren (who appeared as himself on Call My Bluff for many years). The problem is that it has dated horribly, not just in terms of production values but in the nature of the humour itself. That’s not to say that all comedy must be filtered through a politically-correct gauze, but when it leaves a bad taste in the mouth, it’s a fair indication of how the cultural zeitgeist has changed.

In the first episode, A Star Is Born, wrestling manager Sydney Foskett (Rossiter) discovers Nigel (Molina) at a fairground. Recognising talent, he persuades Nigel’s parents to part with him so that he can train Nigel up for a glittering career in the ring. The unprepared Nigel is slaughtered, but is an instant hit with the crowd. Foskett decides there’s money to be made in promoting a great loser, and the arc of the series sees him sabotaging Nigel’s attempts to do well in his fights.

The uncomfortable issue this premise raises is that Nigel isn’t portrayed as merely a bit thick, but as mentally retarded, and many of the jokes in the opening episode invite the audience to laugh at his expense. It’s interesting to note how radically the character of Nigel changes for the rest of the episodes, where he becomes more naïve than simple.

If the characterisation of Nigel improves with the second episode (and the wonderful Molina is finally given some lines) then this work is undone by horrendous gay stereotyping (a camp guest performance by Valentine Dyall) and accompanying prejudice that nowadays is confined mostly to religious leaders.

If that wasn’t bad enough, the episode All Down In Black And White – if the title itself isn’t a giveaway, is an excuse for some vile racist humour that must have been increasingly unacceptable even in the late 1970s since it isn’t good-natured at all. The resulting farce, in which Rossiter and Molina end the episode blacked up and on the run, is embarrassing enough to make your toes curl.

The episode that translates the best to Twenty-First Century sensitivities sees Rossiter trying to procure a Norwegian escort girl for Molina. It manages for the most part to avoid misogyny.

In summation, The Losers is an interesting curiosity, and I award it two stars for the wonderful performances by Rossiter and Molina. The miracle of this lost series’ release is undermined by the content, which is more spiteful than funny, and doesn’t rank alongside timeless classics such as Rising Damp.