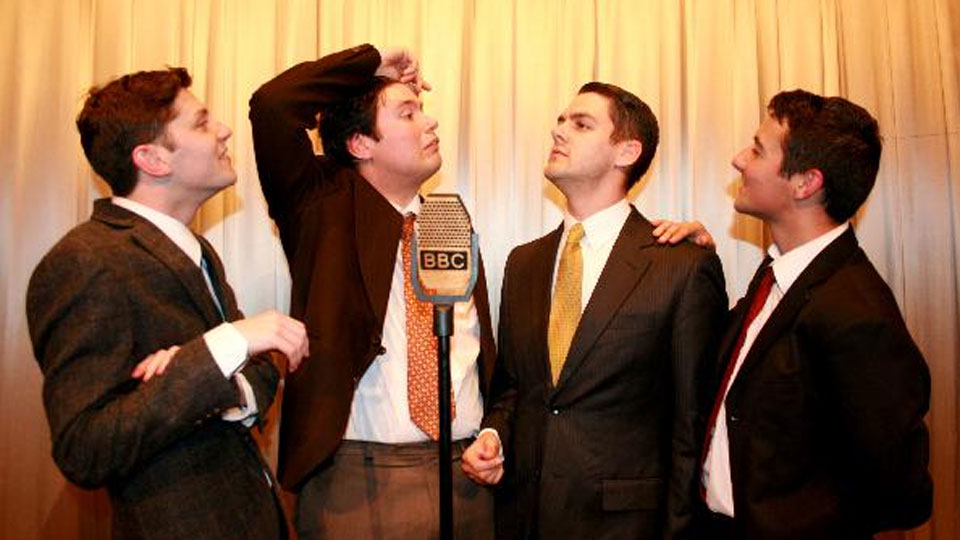 Like so many other legendary BBC series of the time, Hancock’s Half Hour is far from complete in the archives. However, the imperious scripts (written by the comedy duo Ray Galton and Alan Simpson, who would go on to createSteptoe And Son) for the lost episodes have survived, and thus Hambledon Productions bring you Hancock’s Half Hour – The Lost Episodes at Kennington’s White Bear Theatre.

Reaching the theatre is an oddly disjointed experience. An easy stroll from the Underground through the leafy affluence of Kennington terraces lands you in a working man’s pub (if you call in for a pint before the show, take a few extra shillings as you may be offered cuts of meat at discount prices by passing salesmen). The theatre, nestled at the back of the pub, takes you into a different world again.

On this occasion you’re whisked back in time to the 1950s. Hancock’s Half Hour – The Lost Episodes is presented in two instalments. It opens with the audience congregating around the actors as they prepare for the recording of a radio show. There are many lovely touches throughout the production that reveal a high level of attention to detail, not least the actors establishing their legendary parts through laughter (there’s no mistaking Sid James and Kenneth Williams) as they wait for the recording to begin.

The first script is performed as if for the medium it was originally intended, with the actors gathering around two prop microphones and returning to their chairs between scenes; whilst a sound effects technician (Jane Crawshaw) adds atmosphere (Hancock paddling and drowning are particularly effective – amazing what you can achieve with a bucket of water and a sink plunger).

Whilst the actors give lively performances, they are of course committed to maintain the illusion of radio and deliver their dialogue through the microphones, which inevitably renders the stage rather static. At only just over half an hour, the first instalment doesn’t outstay its welcome (a full evening of staged radio drama may be a different proposition), with a lively plot about Hancock’s disastrous holiday to Brighton in mid-November zipping along thanks to the performances and the original presentation of a radio medium on the stage.

After the break you become part of a television audience, reclaiming your seat in front of Hancock’s sitting room – itself of course a television set (the period detail is superb). The lost television episode, an enjoyable farce in which the housework is getting Hancock down, so he agrees to let his randy friend Sid James hire him an Italian maid, is ideally suited to the stage.

With more than half a century having elapsed since the scripts were written, Hancock’s Half Hour presents broader, more innocent humour from a time before naturalism in comedy held sway. Whether or not you find the production funny hinges on your taste for nostalgia and comedy classics. Hancock fans can rejoice in superb performances. Christian Darwood is exceptionally good as Kenneth Williams, and shows great versatility in other parts. His take on Williams is accurate and affectionate. Luke Adamson captures the dirty laugh and cheekiness of Sid James, and his comic timing, especially in the second instalment, is impeccable. He enjoys a great rapport with Amy Holmes’ beautiful and sassy Italian maid, who adds the sparks to the story. Simon Weeds makes the most of smaller parts, with a good ear for the Australian accent as Bill Kerr.

What of John Hewer’s Tony Hancock? Hewer has clearly studied his subject in depth, since his mannerisms, vocal delivery and rapport with the audience create an indelible impression of Hancock from the start. If there’s any criticism of his uncanny performance it’s that he’s perhaps a touch too reverential of the source, faithfully recreating Hancock’s affable bumbler who would on occasion slip off beat. He’s a joy to watch in both instalments.

There’s much to enjoy in this affectionate production, and it’s a definite treat for fans of Galton and Simpson’s comedy and Hancock’s performances. Hancock’s Half Hour – The Lost Episodes suits the intimacy of the White Bear Theatre, drawing the audience in to a faithful recreation of some comedy classics. With only two episodes, it’s short, snappy, and definitely sweet.