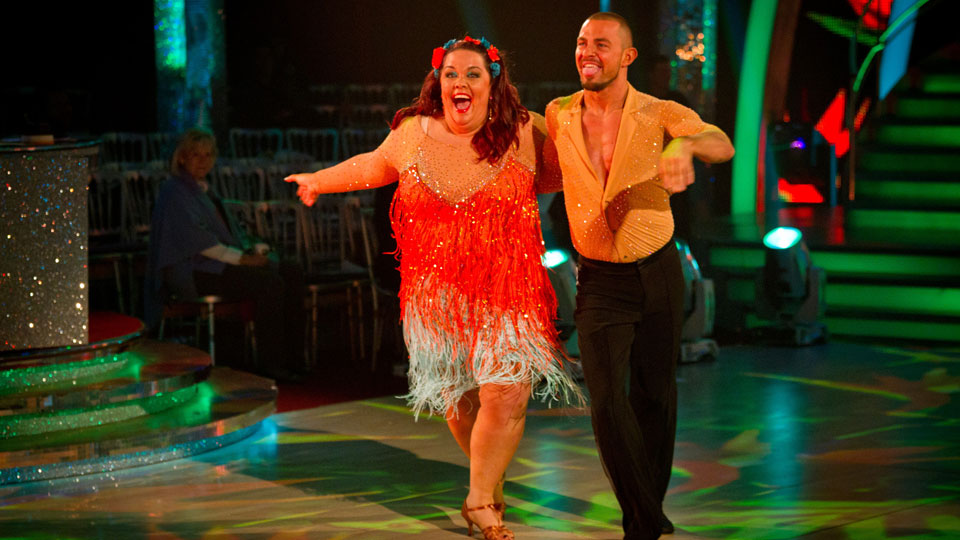 Last weekend the Strictly Come Dancing semi-final saw Lisa Riley and her partner Robin Windsor’s journey come to an end as they finished fifth overall in the competition.

Every week Team RiRo has entertained with stunning dance routines, a few laughs and the occasional slip-up. Personally we think they should have been in the final but alas it wasn’t meant to be.

In our weekly update with Robin we talk about leaving the competition, Team RiRo’s Strictly journey and who he thinks is going to pick up the glitterball.

At the weekend your ‘Strictly’ journey came to an end. How does you feel?

On Saturday Lisa and my Strictly journey came to an end. You know what; we left with our heads held high. There were a few tears but I think they were well needed as it had been a very tough 11 weeks.

It’s just amazing that everybody’s so supportive of us. From day one the  public have been on our side since the very beginning and it’s been such a nice feeling to have that every single week. We put a lot of it down to them because we were at the bottom of the leaderboard a few times and it was the public that were saving us each week. We’re so thankful for that.

Let’s talk about the dances from the semi-final. Firstly you danced the Salsa. What exactly happened with Lisa’s spin?

It was all going so well but when I decided to spin Lisa on the floor there wasn’t enough power behind it and she somehow managed to be on her side. I thought it was all over and that we’d never be able to finish the dance but she got up and she carried on which I think is quite remarkable. I was in a fit of giggles for the rest of the number.

I think that was first time that we never got a comment from Craig because he was laughing so much bless him!

You also danced the American Smooth which the judges seemed to like more. How do you feel that went?

I loved the American Smooth. It was very Broadway. It was very me and very Lisa. All That Jazz is one of my favourite numbers so to be able to choreograph to that I was really happy. It went really well.

How did your fellow contestants feel about your departure?

There were tears all round. We’ve become such a close family over the period of the show that to get so close to the final made everyone sad for us that’s left in the competition. Everyone who has already left is sad for us as well. It was really nice of everyone to say the lovely things that they did.

In Lisa’s eyes she felt she’d won from week 1 because she’s come out and done what she wanted to do which was ‘you know what big girls can dance and I want everyone’s opinion to change.’ She went out and did that and called herself a winner in week 1. It didn’t really matter how far she actually went. To get to the semi-final was just the icing on the cake and every week was just a bonus.

This series has been your most successful to date and your profile has gone through the roof. How do you feel about that?

For me, on a personal level, it’s just been amazing. Obviously it’s raised my profile quite a lot because Lisa’s been the talk of the series. Really that’s just an added bonus. I just went out there and had a great time with Lisa teaching her how to dance and what to do for me every week. That’s what I was there to do and anything that comes with it is a bonus.

Could you ever have imagined at the start of the series that you’d get this far and receive the reaction you have from the public?

When I first got Lisa I had preconceptions like everybody else and I was like ‘oh my goodness what am I going to do?’ I’d never considered myself the funny one and I didn’t realise at that time that I’d be able to do what I could with Lisa. She’s changed my life and she’s changed my opinions. You should never judge a book by its cover.

On the results show on Sunday Lisa said you’d changed her life and she owes her success to you. It seems like the two of you really have formed a close bond…

We will be best friends for life. That’s what’s amazing about this show. There’s something amazingly infectious about Lisa. She’s one of these people that you meet and you know she’s going to be a friend for life. She’s just incredible as a person and she’s very generous, giving and full of life. It’s so infectious and she’s taught me so much about life.

Of course this isn’t the last time we’ll see you dancing together as the ‘Strictly Come Dancing Live Tour’ kicks off in January. When do you start rehearsing for that?

We start rehearsing for that on the 7th of January which is going to be amazing. After all the hard work we’ve done we can now go out and enjoy the tour and have a great time with a little pressure taken off. Lisa is ecstatic about dancing at the Manchester Evening News Arena.

Do you think the two of you may dance together again in the future or is it too early to tell?

Who are you putting your money on to pick up the glitterball trophy in the final this weekend?

The final beckons this weekend and there’s four very well-deserved finalists there. Each of them deserves to win for different reasons. Dani started off ok and has got better and better. She’s the dark horse and I think she could do it. Kimberley all of a sudden has come out of her shell and has this big personality. She could also do it. Louis is coming out of his shell and is getting better week-on-week.

For me I’d love Denise to lift that trophy. She’s had a rough time with the press saying that she’s a trained dancer. Yes she has had some dance experience but so has everyone apart from Louis who has had gymnastics training. Denise was very good week 1 but in the semi-final she was brilliant. That just goes to show that’s she actually worked incredibly hard to make it to the point she’s got and how good she is. My money is on James and Denise and I hope people pick up the phone and vote for them.

What would you like to say to everyone that has supported you and Lisa over the series this year?

I’d just like to say a massive thank you to everyone for picking up their phones and supporting us. It means the world to us both and we’re really happy with how far we got in the competition. We’re sad it’s over but we’ve had a great time and Lisa has inspired everyone.

The ‘Strictly Come Dancing’ final airs at 6.30pm on Saturday night on BBC One and BBC HD. Watch Lisa and Robin dance the American Smooth from last weekend’s semi-final.