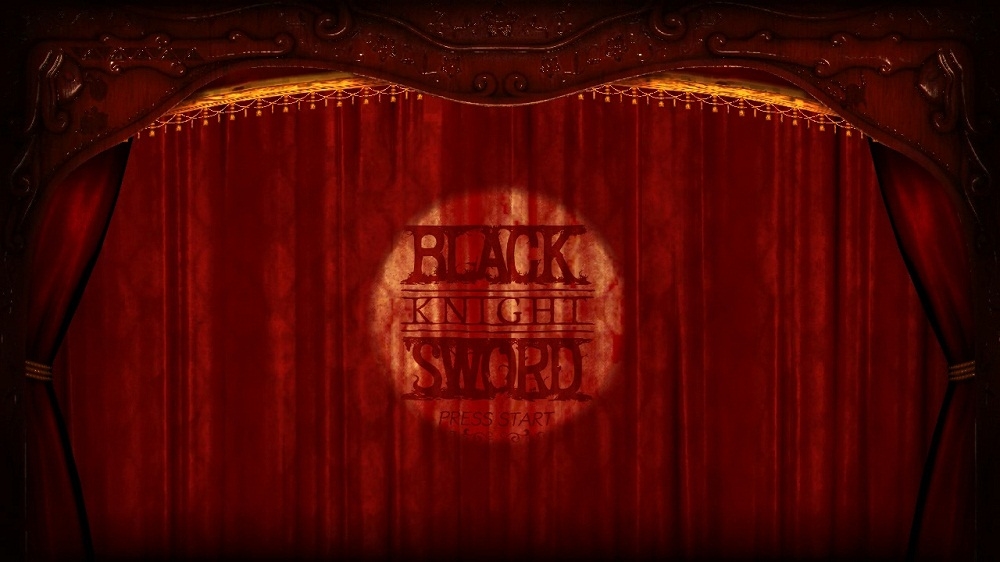 Black Knight Sword is a side-scrolling action platformer created in collaboration between Suda 51’s Grasshopper Manufacture and Digital Reality. We took a look at the XBLA version to see if they have managed to replicate the success of their work together on Sine Mora.

Every game from the mind of Suda 51 tends to be a bit bonkers and Black Knight Sword certainly continues the trend. You play as a puppet that finds a magical sword and becomes the Black Knight who must free the world from the rule of the Evil White Princess. The unique look of the game is inspired by Japanese Kamishibai (paper drama) and looks very Monty Python. The action is set on a hand-drawn puppet theatre stage and as you move through the five stages the backdrop constantly changes.

Controlling the Black Knight is done via the left stick with the right stick used to move the direction of the camera. Tapping A performs a jump with a second press for double-jump. X is used to attack with the sword and eventually Y performs a magic attack. The Black Knight can also crouch and pressing A carries out a backwards roll which is used for evading incoming attacks.

The Black Knights sword contains a spirit known as the Black Hellebore which you can summon to attack enemies. This spirit is also used to solve simple puzzles; a squeeze of the Right Trigger sends the spirit off to activate switches. You’re probably thinking this all sounds rather sensible for a Suda 51 game but Black Knight Sword features plenty of bizarre enemies and things to interact with.

Throughout the levels you’ll discover collectible Cat Head Grass plants and also hidden microwaves that once activated shower the screen in more beating hearts or other useful items. There are enemy knights, horse heads on springs, mutant flowers, wolves and fire-breathing heads to name but a few. Killing enemies gives beating human hearts which can be saved up to spend at shops on upgrades. To find a shop you need to rescue caged flying eyeballs which when free summon a giant flying eyeball with six mouths. Shops let you replenish and extend health, add armour, increase magic and lives. Completing stages grants you extra powers such as the ability to charge your sword up before attacking.

Black Knight Sword features three difficulty levels and almost everyone should start with the easy difficulty. The platforming action is difficult and the enemies can be even tougher. Even the easiest jumps need to be well timed and later in the game things get tougher. From platforms made of cogs that spin as you move on them to one level that requires you to jump from boat to boat as the screen fills with water. The higher difficulties are much harder and will frustrate players inexperienced with platform games.

Enemies have set movement and attack patterns that you need to learn in order to survive. Throughout the game you also come up against bosses and mini-bosses which are much tougher to defeat. Sadly enemies and bosses are reused often so things become a little repetitive later on.

The game features a checkpoint system but forces you to manually save your progress. If you fail to pause and save then you end up needing to play from the start of a level again. It’s an odd system and rather frustrating. Also accessing the pause menu and getting back to the game needs a loading screen which spoils the action as you need to save often.

Once you’ve played through the game there is little incentive to play it again unless you want to defeat the tougher difficulties, complete your collectibles or best your highscores. Beating the story mode though does unlock an arcade mode and challenge missions.

Black Knight Sword feels like it was created for the 16-bit era when platforming games were tough and unforgiving. To get the most from the game you really need to experience it on at least normal difficulty. Fans of platform games or Suda 51 are certainly in for a treat while it lasts but the game is let down a little by its length and repetitive gameplay.