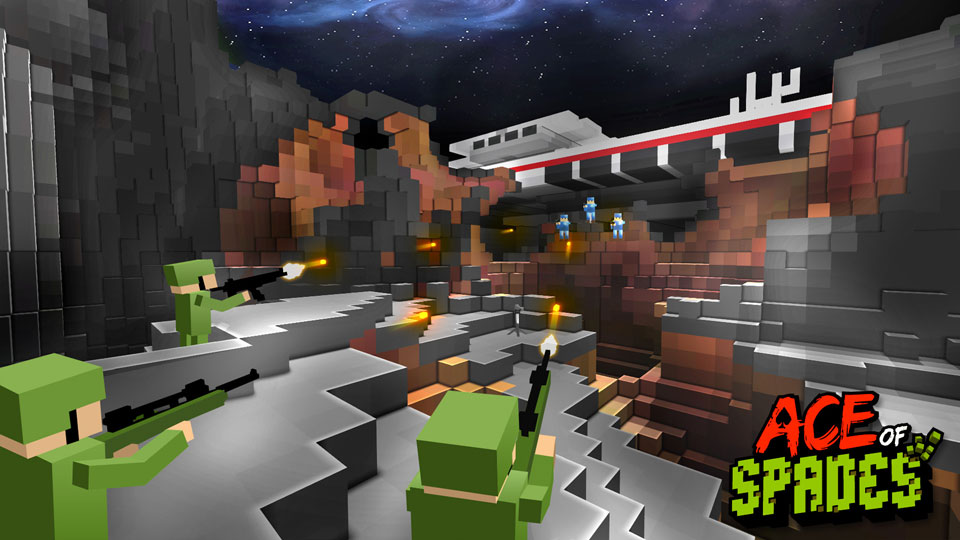 Excitement has been building at a frantic pace since Jagex announced their involvement in the game last month, with more than 500,000 people pre-registering on the game’s website in the 4 weeks leading up to today’s release.

Ace of Spades seamlessly combines both combat and construction in real-time, players are able to utilise fortifications, coordinated assaults, stealth,  strategy and tactics in their attempt to achieve  one of a variety of set objectives or can design their own bespoke games and objectives to obliterate the enemy from the map.

Ace of Spades launches with four unique classes, each with their own distinct weapon and utility set:

This one man army carries things that go boom! With all brawn and some brains, the Commando is a heavy weapons specialist that will rain destruction down on anyone foolish enough to get in his way.[/tab]
[tab title=”Marksman”]

An expert in covert operations, once the Marksman gets you in his sights you better hope he doesn’t pull that trigger, he has razor sharp accuracy and distance is no object.[/tab]
[tab title=”Rocketeer”]

Catch him if you can! With his jet pack the Rocketeer will be getting into all the best tactical locations, ready to ambush you from on high!  Once he’s taken out his target he’ll fly off and wait for the next unsuspecting victim.[/tab]
[tab title=”Miner”]

The Miner is the tunnelling king and an expert at crossing enemy lines undetected!  If you don’t post a look out he might just collapse your defences without ever having presented a target for you to fire at.[/tab]
[/tabgroup]

The game also launches with a selection of game modes which can be played on a variety of maps including:

[quote by=”David Solari, Chief Marketing Officer for Jagex”]It has been a long time since I have been this excited about a game launch and we really cannot wait to welcome players into the battle. It’s been wonderful seeing the community grow and get behind Ace of Spades and we were blown over by having 500,000 registrations for the game in such a short space of time. With Ace of Spades we have something which is unique, challenging and fun so let battle commence![/quote]

Ace of Spades is the latest title from the multi-awarding UK studio behind the leading free-to-play browser MMO RuneScape.com, the recently announced Facebook racer Carnage Racing, and the eagerly anticipated Transformers Universe MMO.

In this article:Ace Of Spades, Jagex, Steam