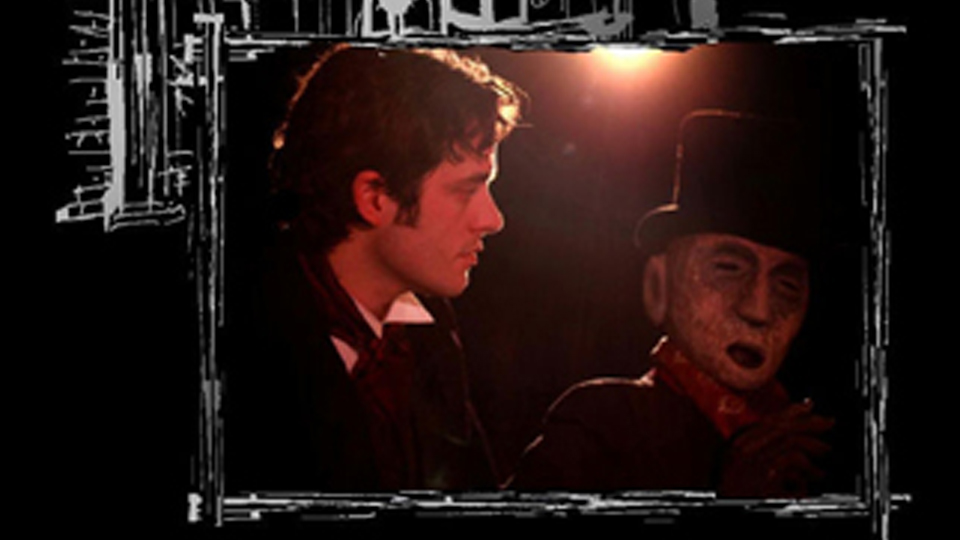 Dominic Gerrard’s seasonal one-man show is a truncated version of Charles Dickens’ celebrated novella A Christmas Carol, which is now playing at the Waterloo East Theatre. It’s probably the ultimate festive show, given that it ticks every box with Victoriana, ghosts and melodrama. It’s at times witty, in turns melancholy – and all with a good moral lesson at the heart of it!

But with so many offerings of A Christmas Carol doing the rounds at this time of year, there has to be something a little special to recommend it. Dominic Gerrard himself cuts an appropriately fine and impressive figure on stage. Decked out in Victorian garb, his handsome face has an authoritatively period ring to it that doesn’t look remotely out of place in black Nineteenth Century regalia. In fact, he looks completely at home, and Dickens’ words trip with familiarity and relish from his tongue.

What marks this one-man show out is that it’s not quite a one-man show. For Ebenezer Scrooge, Dickens’ antihero is embodied by a near-life-size puppet, created by Mandarava, which exists from the waist up, resting on a table top. As Gerrard dresses the puppet appropriately and manipulates its arms and head, a new character springs to life on stage before your eyes. This perhaps is unexpected, since the face is at first glance disturbingly inhuman – with vacant eyes like mussel shells and an agape and toothless mouth. The gnarled hands and the green pallor mark this Scrooge out as near enough the stuff of nightmares (older children will love it, youngsters may scream the house down). Yet through subtle lighting and the gentlest of touches, the blank canvas of the Easter Island Statuesque face becomes surprisingly expressive, and you can’t help but look to Scrooge’s reactions as Gerrard’s narrator relates the story.

My reservation with one-man shows is always the same – it’s hard to focus on a single voice for any length of time, and the lack of interaction with another human being can become wearisome. Gerrard lifts the threat of ennui with a cast of voices, characterising everyone from loveable cockney Bob Cratchit to dour Scotsman Jacob Marley. His voice for Scrooge is delightfully chosen: a slight feyness lending it an oddly vulnerable and even loveable quality. If the voices add spice, the so too does the pacing of the narrative, and Gerrard has been well directed here.

The disadvantage of the novelty of puppetry is that it makes for a visually static performance, since the attention is focussed for the most part on Scrooge, who doesn’t move from centre stage. In that sense the world comes to him, through variations in lighting providing texture to changing scenery. It leaves Gerrard with only three positions whilst working the puppet: behind Scrooge and either side of him. It’s advisable to choose seats with a good view of centre stage. The variation supplied when Gerrard enacts the inside of the Cratchit household is a welcome relief from what becomes an unremittingly tight focus. Any larger a performance area and the show would be in danger of being lost; but the relative intimacy of Waterloo East Theatre suits it well. At seventy minutes without an interval it’s a short and snappy show that still retains all the salient points of Dickens’ prose.

Whilst the puppetry is undeniably enjoyable, and includes some lovely touches such as Scrooge poking his young nephew in the eye with his quill; it’s the quality of Gerrard’s storytelling that impresses the most. His production of A Christmas Carol is carried through his voices and through the characters he creates, rendering it like drawing up to the fireside as a child and being held captive to a wonderful story. Dominic Gerrard’s telling of a timeless festive classic is a thorough delight, and often beautiful.