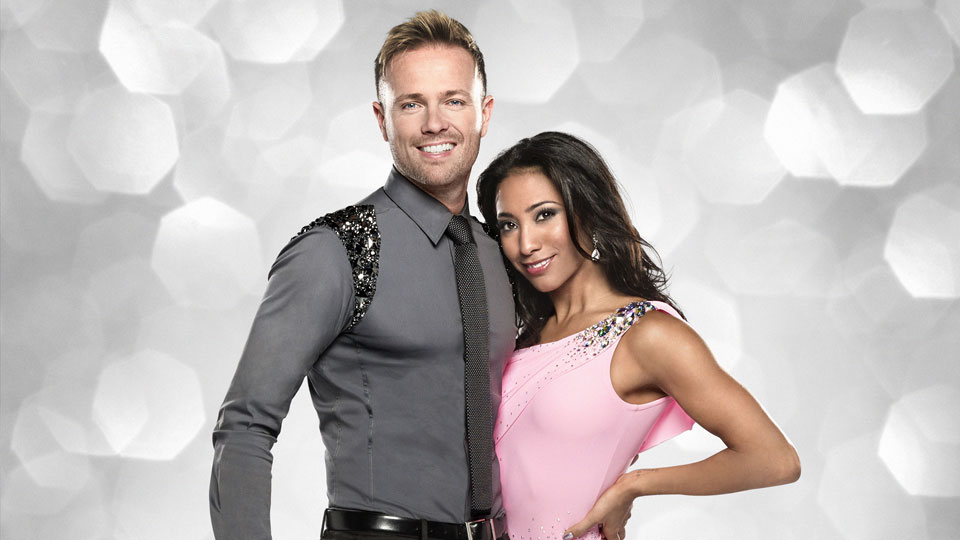 Last week’s Wembley spectacular gave Strictly Come Dancing its most talked-about show to date. Lisa Riley surprised with her splits, Victoria Pendleton flew in on a bike and Richard Arnold camped his way out of the competition.

With only 8 couples left the pressure is on now the end of the competition is in sight. Who danced their way to high scores and who crashed and burned this week? You can find out in our recap which captures every moment of the action from tonight’s live show.

Opening the show tonight was dark horse Dani Harmer. Last week she wowed Wembley with her Quickstep and definitely established herself as one of the front-runners in the competition. This week Dani danced the Samba with her partner Vincent Simone. Len said that Dani got the party started and called her ‘brave’. Bruno called the dance ‘charming’ and praised her foot placement. Craig called Dani ‘one hot little dancer’ going on to say he loved her ‘bounce action’. Darcey agreed with the other judges and commented that it was a ‘clean Samba’.

Kimberley Walsh was second to dance tonight. Last week she danced the Salsa with her partner Pasha Kovalev. In the VT this week Kimberley admitted she was struggling to find the anger in her Tango. Could she pull it out of the bag on the night? Well the audience gave their first standing ovation but what did the judges think? Bruno called Kimberley ‘an ultra vixen with a mean attitude’ labelling the dance ‘brilliant’. Craig said there was a slight wobble in the middle but said he ‘loved the drama’. Darcey praised the story-telling and said she ‘loved it’. Len agreed that the mood was great but said Kimberley’s hold was a bit loose.

Victoria Pendleton was the next to take to the dance floor with her partner Brendan Cole. Her Paso Doble didn’t wow the judges last week but she impressed the viewers at home it would seem. This week Victoria danced the Salsa. Did she manage to get her Latin right? Craig criticised Victoria’s ‘fluidity’ whilst Darcey was impressed with the armography but not so much with the hip action. Len said it was a ‘light Victoria sponge’ and needed more ‘oomph’. Bruno said that Victoria didn’t let herself go and was disappointed with the dance.

Olympic gymnast Louis Smith danced the American Smooth last week at Wembley. The judges weren’t as impressed as usual so Louis had to bring his A-game tonight. Dancing the Paso Doble with his partner Flavia Cacace could Louis jump back to the top of the leaderboard? Darcey said she didn’t feel there was any attitude or storytelling in the routine. Len said there was nothing going on in the routine and Bruno agreed saying there was nothing behind the movements. Craig said that Louis needs to learn to act the dances or he will go no further in the competition.

The people’s favourite Lisa Riley was next to dance and was still buzzing off the reaction she got from last week’s Samba at Wembley. Emotions ran high last week and Team RiRo got their joint best score to date. This week Lisa got romantic with her partner Robin Windsor for a Rumba. Len said he liked some of the detail but said it missed the feeling of the dance. Bruno said it was nice and ‘surprisingly understated’. Craig said it was ‘slightly tempestuous’ and lost its sensuality. Darcey said the Rumba wasn’t Lisa’s dance.

Michael Vaughan continued to improve last week when he impressed with his American Smooth and closed the Wembley show. This week Michael had the challenge of being sexy, something which doesn’t seem to have been all that natural for him. Dancing the Argentine Tango with Natalie Lowe how did Michael fare? Bruno said Michael looked like he was ‘passing a kidney stone’ and criticised the lack of sexiness. Craig said it lacked ‘resistance and lead’ whilst Darcey said she missed the domineering man that the Argentine Tango needs. Len said the performance was lacking but praised it for being a full routine.

Westlifer Nicky Byrne ended up in the bottom two last week despite doing an impressive Jive. He managed to survive and is back this week for another dance. With his partner Karen Hauer, Nicky danced the Charleston. Did he fare better this week? Craig said the routine suited Nicky calling it his ‘best dance yet’. Darcey said it was ‘magic’ and Len said he liked the setup.

Last to dance was Strictly favourite Denise Van Outen and her partner James Jordan. Last week they blew the judges away with their Charleston. After a bit of trouble in their training which almost resulted in Denise being injured, the couple danced the American Smooth. Darcey called the routine ‘graceful and musical’ commenting that it was ‘beautiful’. Len said it was effortless and ‘wonderful’. Bruno said it was ‘perfection’ and Craig mocked James but called Denise ‘perfect’.

The leaderboard for the evening was as follows:

Tune into the Strictly results show tomorrow at 7.20pm to find out which couple leaves the competition.