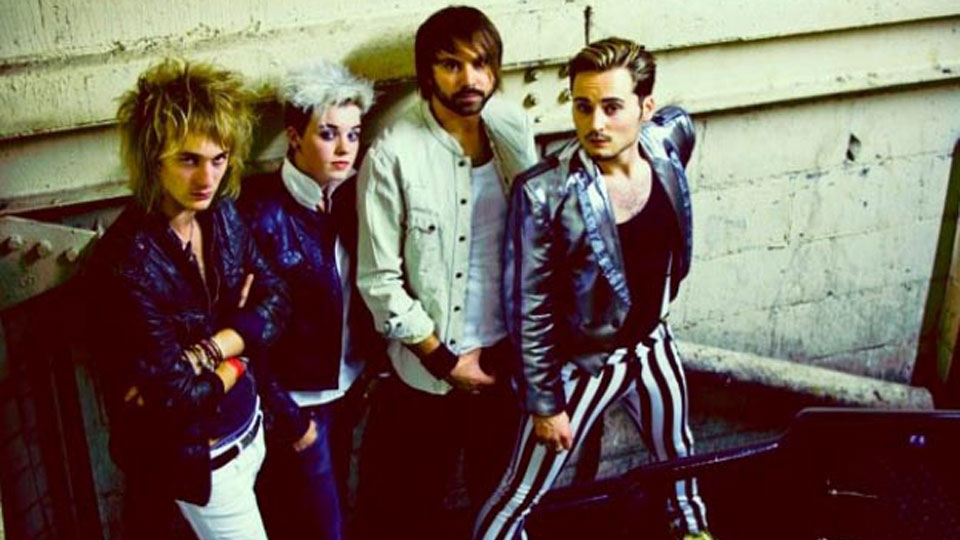 Joywride are a four piece band, who describe themselves as glam-pop. Although they don’t like to be defined and prefer to let the audience make up their own minds! Joywride are a band that you need to see live. They are a physical and visual force. Everyone in the crowd had an opinion on them, which can only be a good thing.  They look like an 80’s glam band, part Madonna, part Freddie-Mercury, with songs akin to the Scissor Sisters and they are pure glam-pop, as they state. You can’t quite put your finger on it as to who they remind you of, but together they are a visual force. Not only do they want to showcase their catchy songs to you, but they believe that they should be entertaining and put on a show for their audience. They don’t disappoint.

21st Century Love was the first song. Frontman Ollie wiggled his bottom and turned around to face the crowd, with a big smile on his face, telling the crowd that they looked fabulous. The song was up-beat and their energy was incredible. The riffs in the song were catchy and it sounded as you might have heard it somewhere else before, it is an instantly catchy song and it sounds familiar and likeable. This man is a born show-man.

Their next song was Pop Music. Ollie took his coat off, waved it around his head – before launching it into the crowd. After listening to this pop gem, how can you not believe in pop music?? This song needs to be released as a single. This is a song certain to get everybody up and dancing and smiling. A great feel-good song with huge likeabililty.

Headrush was up next, which is to be their next single and to be released in February 2013. The band all give everything into their performance. There were lots of ‘ooooh-ooooh’s in the song, and the audience were happily singing along to the band and dancing around the small dance-floor. Ollie managed some incredibly impressive high notes.  Just as everyone was really getting in to the song, it seemed to end quickly. Maybe we were just enjoying it a bit too much. Just as we were ready for the next song, the band walk off stage.

This prompted everyone to shout our MORE, MORE! Poppy, the bassist probably had the biggest cheer of the night when she came back on to the stage. She is one cool lady and it’s great to see a female play an instrument, most often dominated by the men! Her hair was also as funky as herself, akin to Madonna circa during her True Blue album. Ollie ended the show by bringing out a cannon stick, which he teased the crowd with, before pulling the end – covering everyone in silver and pink confetti strands.

This band definitely need a bigger stage. Ollie Wride is a great show-man and a born performer. Watch this space for future releases and news fro Joywride. We are sure to hear a lot more about them in 2013.

Advertisement. Scroll to continue reading.
In this article:Joywride