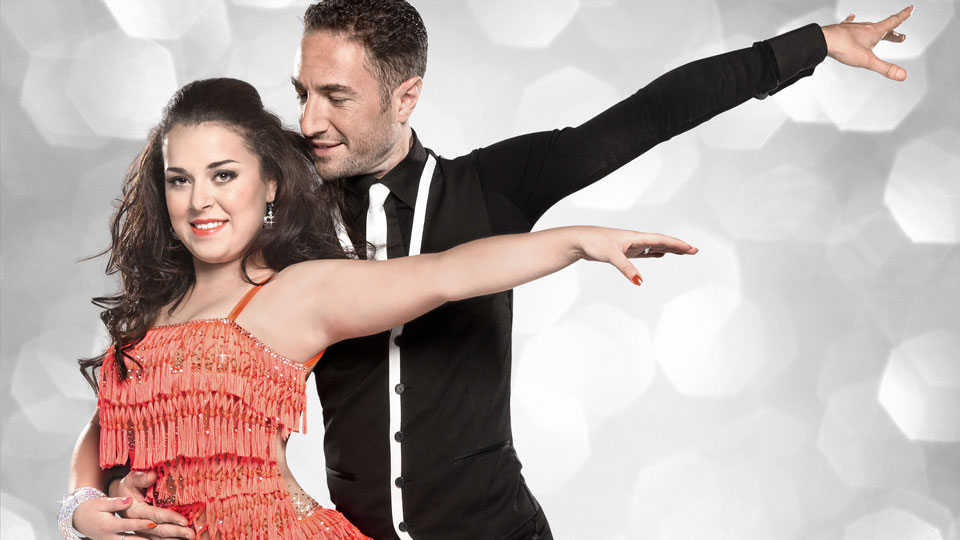 Strictly Come Dancing went to Wembley tonight in aid of Children In Need as the show entered its seventh week of live shows. Last week saw the couples go from 10 to 9 as the competition heated up.

This week the remaining 9 couples fought for their place in the competition as the pressure got even more intense. The show opened with a group number featuring all of the professionals and the remaining celebrities. The atmosphere was buzzing and the excitement was apparent as the audience whooped and hollered in appreciation.

Kicking off the Wembley celebrations tonight was Lisa Riley and her partner Robin Windsor aka Team RiRo. Last week the couple impressed with their entertaining Foxtrot and the judges commented on the improvement in Lisa’s footwork. This week they were dancing the Samba but could Lisa better her high score from last week? An emotional Lisa got a rousing applause from the audience and even Robin looked a bit choked up. Len said he would like a little more polish in Lisa’s technique but said he loved the performance. Bruno said Lisa’s personality shined through and said he loved it. Craig said it was ‘big, bold and beautiful’ but said she lost a little timing. Darcey said the energy of the routine was perfect.

The second couple to dance was Nicky Byrne and Karen Hauer. Last week Craig said he saw a massive improvement from Nicky. The Foxtrot seemed to be a turning point for Nicky as he finally managed to impress. Could he maintain the momentum with the Jive this week? Bruno called Nicky a ‘randy rascal’ but told him he needed to work on the kicks and flicks. Craig said it was flat-footed and stompy but admitted he loved the energy of the routine.  Darcey said it was a great Jive but agreed that the kicks needed work. Len said he saw a different side to Nicky and called the routine ‘slick’.

Frequent leaderboard topper Denise Van Outen was the next to take to the floor at Wembley. Last week she impressed with the Paso Doble and won praise from all of the judges. This week Denise was dancing the Charleston with her partner James Jordan. Dancing to Walk Like An Egyptian could Denise keep her spot at the top of the leaderboard? Craig said it was the best Charleston he’d ever seen on Strictly. Darcey said it was a polished performance and commended James’ choreography. Len said it was the dance of the series so far and Bruno called Denise ‘the jewel of the Nile’.

Louis Smith had a rough week last week after Craig pulled apart his Waltz. Determined not to let it knock his confidence, Louis came back fighting this week with his partner Flavia Cacace. Tonight he danced the American Smooth in a bid to win the judges back. Darcey said it was a different style of American Smooth but said she loved the tricks. Len said he was bewildered as it was more of a Quickstep than an American Smooth. Bruno said the tricks were impressive but criticised the lack of side-to-side dancing. Craig said he thought it was refreshing and admitted that he loved the choreography.

TV critic Richard Arnold was next to face the judges as he took to the floor at Wembley. Last week Richard impressed with his Charleston and is starting to prove that he can hold his own in the competition. Tonight Richard danced the Salsa with his partner Erin Boag. Could he continue to impress? Len said it was a ‘proper party’ whilst Bruno said it was fun despite the technique being sketchy. Craig said it was littered with timing issues but said he liked the three speedo-clad dancers.

Victoria Pendleton recovered from her poor Samba by wowing the judges with her Quickstep. Determined to continue her momentum, Victoria vowed to improve again this week. Dancing the Paso Doble with partner Brendan Cole, Victoria flew onto the stage on a bike. Would the judges be impressed? Bruno said Victoria’s shaping wasn’t right throughout the routine. Craig agreed with Bruno whilst Darcey said she felt Victoria got overwhelmed with the large arena. Len disagreed with Bruno saying he felt that Victoria’s arm placement was pretty good in parts of the routine.

Actress Dani Harmer wowed last week with the Tango. She admitted in her VT that she felt pressure as Vincent is the king of the Tango. For this week’s dance, Dani performed the Quickstep with her partner Vincent Simone. Did she prove once again that she’s the competition’s dark horse? Craig said it was fearless whilst Darcey said she loved it too. Len said that the quantity and quality was there calling Dani ‘Little Miss Dynamite’ and Bruno called her a ‘gorgeous little Smurf’.

The penultimate couple to dance tonight was Kimberley Walsh and Pasha Kovalev. Last week was a bit of a shocker when the couple found themselves in the dance-off against Fern Britton and Artem Chigvintsev. Despite pleasing the judges with her Viennese Waltz, Kimberley didn’t seem to connect with the audience. Tonight Kimberley danced the Salsa to Ricky Martin’s Livin’ La Vida Loca but could she battle her way back to the top? Darcey said Kimberley captured the vibe of the carnival calling the routine ‘fiery’. Len said the routine was ‘fabulous’ whilst Bruno said he loves it when Kimberley ‘flashes and flaunts it’. Craig said it was full of challenging rhythms and revealed that he hoped people were voting for Kimberley.

The last celebrity to take to the dance floor was Michael Vaughan. Michael is the most improved celebrity so far this series and he’s found his niche with Ballroom. Last room he proved that he could also triumph in Latin and it seems he may make it to the end stages of the competition. Tonight Michael danced the American Smooth with his partner Natalie Lowe. Len said that Michael puts the ‘oo’ in Smooth whilst Bruno said Michael really sold it. Craig said that he could tell Michael has been working hard and called the performance ‘fantastic’. Darcey said Michael gave her the glamour and impressed her with the lifts.

Tune into BBC One tomorrow night at 19.20 to find out which couple leaves the competition.