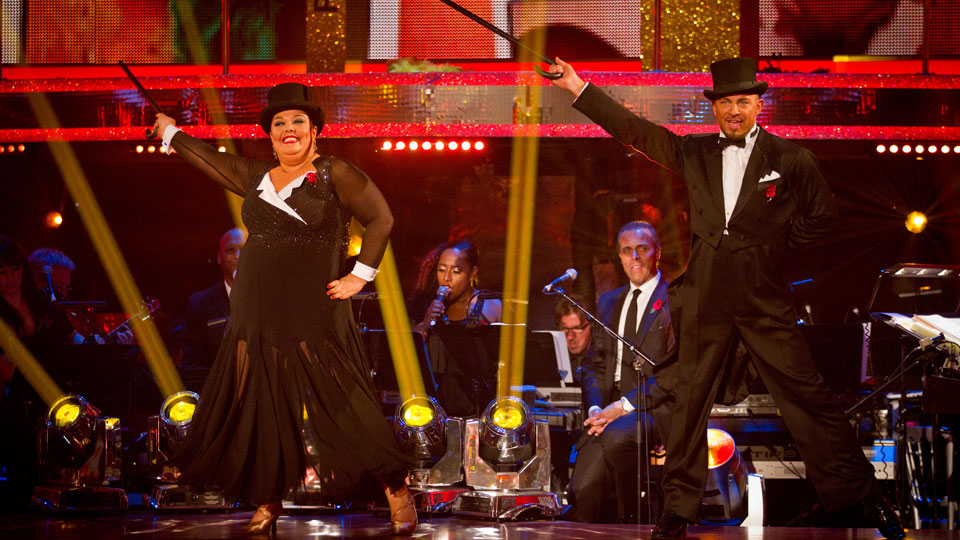 Strictly Come Dancing goes to Wembley tomorrow night in aid of Children In Need as the remaining 9 couples dance to secure their place in the competition.

Last week Team RiRo aka Lisa Riley and Robin Windsor achieved their highest score yet being awarded 32 points for their entertaining Foxtrot. This meant that they finished fourth in the leaderboard at the end of Saturday night’s live show.

This week Robin was struck down with the vomiting bug and spent Wednesday resting up to ensure he was well enough to dance in tomorrow’s Wembley spectacular. We called him yesterday to see how he was feeling, talk about last week’s show and get the gossip on all things Wembley.

How are you feeling now?

I am feeling much, much better. I’ve the lovely 24-hour Norovirus that’s been going round. I went to rehearsals in the morning and they told me to go straight back home because they didn’t want me to pass it on to everybody else who hasn’t had it yet. I was in confinement in my bedroom for the entire day bored out of my brains.

Surely it was a great excuse to catch up on some TV Robin?

You’d be surprised that I didn’t even turn on the TV yesterday except to watch It Takes Two at 6.30pm.

Fingers crossed that you continue to feel better. Let’s talk about last weekend’s Foxtrot. How do you feel it went?

Last week’s Foxtrot was absolutely incredible. Lisa was just the epitome of Broadway and she sold it. She was everything I could have asked for. Her footwork was great, her posture was much better and yes she was still leading a little bit but we’re working on it day-by-day.

The judges passed comment last weekend on how much Lisa’s footwork has improved. That must feel like a sense of achievement for you both?

We’ve worked so hard on the footwork. It was nice to hear from the judges that they’d seen that and that they marked and commended us on that. It was our highest score to date and who would have thought that it would be a Ballroom dance?

It’s proof that Lisa is versatile isn’t it?

Lisa is completely versatile. She’s no one-trick-pony and she’s coming along in all of the dance styles. I can’t wait for our Samba this week.

What can we expect from a Team RiRo Samba?

We’re dancing to the Car Wash and it’s at Wembley so it needs to be big, grand and camp; that’s exactly what everyone’s going to get.

We take it that means we’ll be seeing the fun side of Lisa again?

Is there anything crazy in the routine or are you keeping all the details under wraps?

You’re not going to end up on your head again are you?

Erm…no (laughs) but there is a nice little surprise at the end.

How have the rehearsals been going this week? Is Lisa picking the routine up?

Lisa’s picked up the Samba really, really well. The biggest thing in Samba is bounce and that’s something Lisa’s got bundles of. That’s something I never have to teach it and she’s just got straight away. There’s a lot of choreography so she’s had a little bit of difficulty picking it all up but we’ve only had two days. Obviously Artem stepped in yesterday which I think Lisa was secretly very happy about because we all know she’s got a massive crush on him.

Yeah, she had a big grin on her face. She’s got a little secret crush (laughs).

What was Artem doing with Lisa then yesterday in rehearsals?

Artem went through the routine cleaning up arms and footwork. He was just making sure that Lisa knows the routine going through it time-and-time again keeping it in control until I could make my return. He’s my best friend and I trust him immensely.

Lisa commented on ‘It Takes Two’ that Artem isn’t the taskmaster that other people have suggested he is. Is that true?

I don’t know. I’ve never seen that side of him. I don’t know what Lisa might have done to him to make him a little bit more relaxed. I’ll see at rehearsal today what he’s actually done to her (laughs).

We all know, and you mentioned earlier, that Artem is a good friend of yours. Were you gutted to see him go at the weekend?

I don’t normally shed many tears but I was actually quite tearful after Artem and Fern were voted off last week. He’s my best friend and he was sad. I don’t like to see him sad but he and Fern did such fantastic jobs. They’ll be missed hugely but of course Artem will be there for the group numbers this week.

Last week proved that anybody can end up in the bottom two. Kimberley and Pasha being in there was a shocker…

I know! It was a huge shock and there were gasps in the audience when Kimberley’s name was announced to be in the bottom two. Everyone was so shocked. It goes to prove that nobody is safe and anyone could go.

Yes, I did have a little slip at the bottom of the stairs. Thank goodness it wasn’t during the number. I gracefully picked myself up and I was very embarrassed as you could see. These things happen. It’s live TV. I was a little excited.  I was running towards the stairs and thought I’d be a little bit clever and skid towards them. I was going so fast that my poor little legs couldn’t stop me and I went onto this old lady in the front row. I went down and gave her a big kiss and a hug afterwards.

At least you probably made her evening…

It did. She was over the moon bless her.

What can we expect from the Wembley show this week?

This week you can guarantee it’s going to be the show of all shows. Jason Gilkison, the choreographer and director of Burn The Floor, has been choreographing our group numbers and he’s an absolute genius. Everybody should really look forward to these group numbers this week, they are going to be spectacular.

There’s some great musical guests too this weekend. Kimberley’s performing with Girls Aloud and Kylie is performing too…

Yes! Kylie is performing this week. I’ve spoken to my boss and asked please, please, please can I have a couple of minutes with her. They’ve said yes so I’m absolutely excited with excitement this week – you’ve got no idea!!

Maybe you could dance to a Kylie number at some point this series?

I think I might be able to pull a Kylie number out somewhere.

Why should people vote Team RiRo at Wembley this weekend?

You watch Lisa and myself dance and you smile. You just smile and that’s what it’s all about, seeing someone having a good time. Lisa’s great at what she does, she’s improving week-upon-week and she’s what the show’s about. If she can go all the way to the end then I’ll be thrilled.