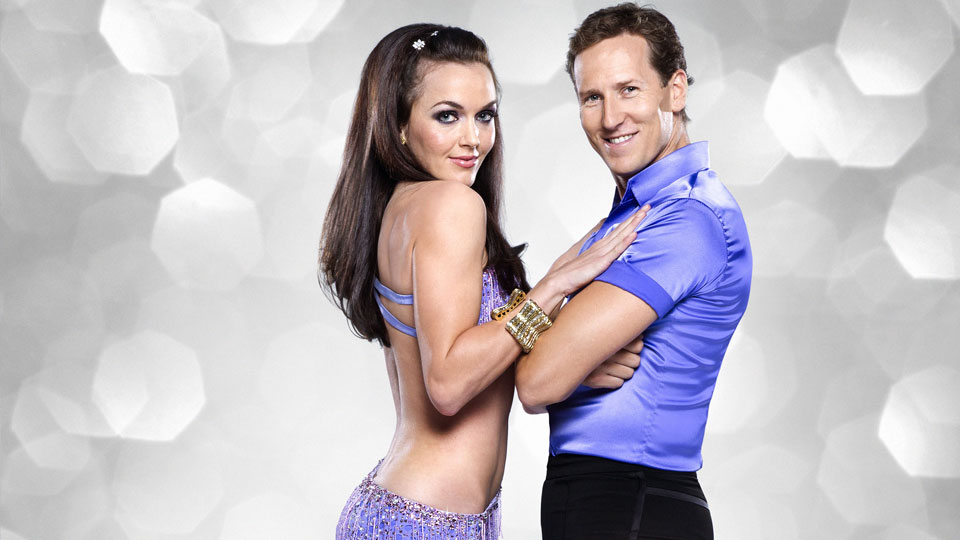 Bruce Forsyth took a break this week as he rested up ahead of Strictly Come Dancing’s big Children In Need show next weekend. Claudia Winkleman stepped in to support Tess Daly as she became the main host for the evening.

Last week Colin Salmon and his partner Kristina Rihanoff became the fourth couple to leave the competition after losing the dance-off to Richard Arnold and his partner Erin Boag. Tonight the remaining 10 couples competed against each other to secure their place for next week’s Wembley Children In Need special.

Every week the leaderboard has jumped around leaving the competition without a clear front-runner. It’s literally anyone’s to win this year and it gets more intense as the week’s go on. We’re still rooting for Team RiRo but the talent is strong this year.

Kicking off tonight’s show was Denise Van Outen and her partner James Jordan. Last week saw the couple impress with their Viennese Waltz which propelled them back to the top of the leaderboard. This week they faced difficulty when James suffered an injury and Ian Waite had to step in for training. Dancing the Paso Doble could they pull it off on the night? The audience loved the routine starting the evening with a standing ovation. Len said he thought it was ‘fantastic’ saying he hardly had any comments to make. Bruno said Denise’s lines were wonderful infusing a bit of Flamenco. Craig said there was one balance issue but said the routine was ‘amazing’. Darcey said it was the most exciting role she’d seen Denise play to date.

Second to dance were last week’s dance-off survivors Richard Arnold and Erin Boag. Last week Richard forget his steps during the Foxtrot but managed to pull it together to claim victory over Colin Salmon. Tonight Richard and Erin danced the Charleston and it was an opportunity for them to show off their fun side again. Did Richard remember the routine this week? Bruno said there was plenty of highlights and called the routine ‘great fun’. Craig said it was ‘fun, quirky and eccentric’ but didn’t enjoy the ‘spanky bottom’ moment. Darcey said it was a ‘fab Charleston’ but told Richard to watch his flat feet. Len said the Charleston suited Richard and praised the routine.

Olympic gymnast Louis Smith was next on the dance floor with his partner Flavia Cacace. Last week the couple won praise for their colourful Samba from all the judges apart from Craig. During this week’s rehearsals Louis’ mum popped by to help Flavia control him and keep him focused. Tonight Louis danced the Waltz but did he manage to win Craig’s praise? The audience were on their feet again by the end of the dance including Cheryl Cole who was there to support bandmate Kimberley Walsh. Craig wasn’t happy with the routine criticising some of the moves and Louis’ timing. He admitted there were parts he liked but said overall it was too saccharine sweet. Darcey disagreed with Craig offering praise which then turned into an all-out row between the judges. Len also disagreed with Craig saying the routine had ‘more than polish than No. 10’s front door’. Bruno said Louis had ‘waltzed his way into the hearts of the nation’.

Fern Britton didn’t have the best comments last week for her Paso Doble but was lucky enough to dance with a half-naked Artem Chigvintsev. Artem’s torso distracted the judges and the audience and left us hoping he’d forget his shirt every week. Tonight Fern danced the Salsa but did she do enough to get to Wembley? Darcey said it was Fern’s ‘party’ tonight and said she loved it. Len said Fern came out and partied and called it her best dance so far. Bruno called her a ‘saucy strumpet’ and said she looked great letting her hair down.

Victoria Pendleton had another messy last week as she forgot her steps again and failed to get into the spirit of her Samba. This week Victoria was back to Ballroom with a Quickstep and her professional partner Brendan Cole must have been hoping she’d pull it out of the bag tonight. Did Victoria manage to hold it together and show she could actually dance? Len said it was ‘quick and there were lots of steps’ before going on to say she did a great job with a difficult dance. Bruno commented that Victoria is better in hold and praised her footwork. Craig said that she moved across the floor with gusto despite a few mistakes. Darcey said that Victoria looked the part this week but agreed with Craig’s criticisms.

Actress Dani Harmer is establishing herself as the dark horse of the competition. Last week’s Jive was well-received and it’s clear that Dani is going from strength-to-strength every week. For this week’s dance Dani performed the Tango with her partner Vincent Simone. Could their winning streak continue for another week? The studio audience gave their third standing ovation of the night but did the judges love it just as much? Bruno called it ‘finger-licking good’ commenting how sharp and clean it was. Craig said Dani is a ‘lovely technician’ but criticised the couple for ending the dance before the music. Darcey said she didn’t like the beginning and felt Dani came across as a ‘moody teenager’ but overall liked the dance. Len said he loved the light and shade of the routine.

Nicky Byrne has had a rollercoaster ride since joining Strictly. Last week’s Rumba wasn’t all the well-received with Craig being the most critical. Determined to prove to Craig that he is as good as the other celebs, Nicky was ready to fight tonight. Could his Foxtrot with Karen Hauer be the dance to silence his critics? The audience gave yet another standing ovation including Nicky’s former Westlife bandmate Shane Filan. Craig said he saw a ‘vast improvement’ in Nicky’s performance and delivered on the excitement the routine promised. Darcey said that Nicky set the mood but criticised him for not having a strong enough drive. Len said Nicky has to move more but he admitted the performance was good. Bruno said the beginning of the routine was ‘pure Vegas’ and praised the side-by-side movements.

Kimberley Walsh is one of the strongest celebs in the competition this year but she must have been nervous tonight with bandmate Cheryl Cole in the audience cheering her on. Last week’s Salsa was a hit with the judges but could the Viennese Waltz hit all the right marks? Kimberley took to the stage with her partner Pasha Kovalev but could she impress once again? Well the audience and Cheryl loved it. Darcey said the performance was ‘emotive’ and she loved Kimberley’s neck extensions. Len moved away from ‘Nimble Kimble’ and renamed her ‘Kimberley Waltz’ before saying he enjoyed the routine. Bruno said it was ‘achingly romantic’ and near perfection. Craig said Kimberley’s ‘snout was pointing to the ceiling’ but said he thought it was ‘delicious’.

Michael Vaughan has turned things around the past two weeks impressing with his Ballroom skills. Unfortunately tonight he was dancing Latin again but could he transfer his new-found skills and apply them to Latin? Tonight Michael danced Salsa with his partner Natalie Lowe but was he any better than the first few weeks of the competition? Len said Michael was better than his previous attempts at Latin. Bruno said Michael can now ‘bat for the Latin team’ but told him his timing needs more work. Craig said the dance was automated and littered with timing issues. Darcey said she liked it and called Michael ‘cute’ praising his lifts.

The last couple to dance was our favourites Team RiRo aka Lisa Riley and Robin Windsor. Last week saw the couple getting serious for the Tango but this week they returned to their fun side. In their training VT Lisa said she was happy with her performance last week but has been concentrating on her footwork this week. Dancing the Foxtrot could Lisa bounce back to the top of the leaderboard? The audience gave Team RiRo a standing ovation but what did the judges say? Bruno said he loves the way Lisa gets into the routine but said she needs to let Robin lead. Craig said the timing was impeccable and footwork ‘ferocious’. Darcey said that she could tell Lisa had worked on perfecting her footwork and called it her ‘best Ballroom dance’. Len said it was a good Foxtrot and praised her footwork and fun factor.

With that all the couples had danced and it was time for the live show to come to a close. Once again it proved to be a night of surprises but finally a pattern is starting to emerge as the front-runners are becoming a bit clearer.

Tune into Strictly Come Dancing tomorrow night at 7.20pm to find out which couple leaves the competition.