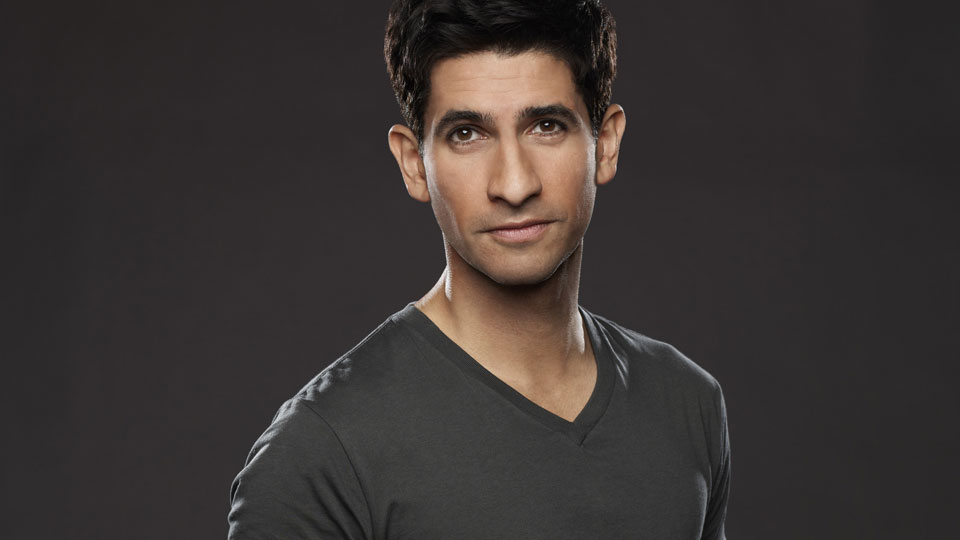 British actor Raza Jaffrey has enjoyed a successful career on both the big and the small screen with roles in Spooks, Mistresses, Sex and the City 2 and Eastern Promises.

Smash – Season One is being released on DVD in the UK on Monday so we caught up with Raza to find out more about the show, talk about showing off his singing talent and discover what it’s like to work with such a star-studded cast.

‘Smash’ is being released on DVD in the UK next week. What’s the show all about?

Smash is about Bombshell, a Marilyn Monroe musical. It’s about all the people coming together to put on this Broadway show. It’s about the lives of all those characters involved in it. We’ve got great music from Scott Wittman and Marc Shaiman who wrote Hairspray and Catch Me If You Can. The pedigree of the people involved is fantastic; we’ve had episodes produced by Neil Meron and Craig Zadan who produced Chicago. It’s made by authentic people who have worked in musical theatre on Broadway and in musical cinema as well. They’ve all come together to make this happen.

You play the character of Dev. What do we need to know about him?

Dev is a Brit. He works in the Mayor’s office in New York and he’s a very ambitious politician. His girlfriend in the show, played by Katharine McPhee, is hopefully going to become the star of Bombshell which is the show within our show. Of course be careful what you wish for because I’m not sure either of them know what they’re getting into on this path they’ve both set themselves on.

She’s wonderful. She’s brilliant and so fun to be around. She’s a really talented performer. American audiences knew her from American Idol first of all and now they’ve welcomed her with open arms as Smash has gone on. She’s a brilliant actress as she’s proven to everyone and it’s a real pleasure to work with someone like that. She’s wonderful to be around.

The cast has some fantastic actors in it – Debra Messing, Anjelica Huston, Jack Davenport – what’s it like being in such a fantastic ensemble?

It’s lovely actually. It’s such a mixed cast. You’ve got Hollywood royalty in Anjelica. Then you’ve got the younger talent like Megan Hilty involved in the show who’s a big Broadway star and this is her first major TV gig. You’ve got people on all ends of the spectrum and I think that’s why the cast gets along with each other so well. For me personally I adore having Jack on the cast as well because it’s nice to have a fellow Brit there and have someone to laugh at your jokes which is kind of nice.  We have great fun shooting it actually. It’s a great set to be on.

What first attracted you to ‘Smash’?

I think it was the calibre of the people involved, knowing that Steven Spielberg himself was involved in the show and that it was his original idea. He’s very hands on as a producer and a lot of icons put their names to something without being there day-to-day but Steven’s so hands with his projects. Knowing that he was involved was a major draw of course. The writing on the pilot episode, which is all we had early on. It was so great to read a script that featured 8 or 9 main characters yet all of them you kind of knew by the end of the episode, just 40 minutes of television, without feeling there was a load of exposition in the show. It’s a real credit to how that pilot episode was written. That was my first experience of Smash and why I knew I wanted to be involved with it really.

The show gets compared a lot to ‘Glee’. How would you say the two shows differ?

Our show is different in that most of the music that happens in the show happens in the course of Bombshell, the musical we’re putting on. People generally don’t burst into song it’s more about seeing people in the rehearsal room than it is people singing in competitions. By the same token Glee is so adored in the States and I know it is in the UK, that if we even have a bit of the adoration Glee’s had we’d be over the moon. One of the truths of the Glee story is that show’s like Smash wouldn’t exist without Glee. I’m not sure we would have been given a voice on network television in America and the UK unless a musical drama like Glee had done as well as it’s done. It’s great to be compared alongside.

You mentioned earlier that your character Dev is the boyfriend of lead character Karen. What hurdles can we expect those two to experience over the course of the season?

The American writers are very good at ensuring there’s lots of rockiness along the road. The nice thing about doing a series in America is that its 15 episodes so there’s a proper arc to the story and a proper chance to go to some places with the characters. One of the other things that drew me to this project was how good they are at writing the stuff you’d never expect and the stuff that goes on in later episodes, particularly between Dev and Karen; when I turned the page my jaw dropped because I had literally no idea what was coming. I think people will be in for a shock when they see what’s going to happen later on in the series.

You are a singer and a dancer yourself. Are you going to get the opportunity to show that off in the show?

Yes. I was really lucky. I don’t think they knew that I could sing and dance before I first met them on this project. When we were up and running in the show Marc Shaiman and Scott Wittman, our song writers who know me, came up with this great idea for a number and they wrote this original number for me. It was in episode 12 and it ended up being the biggest production number that we’d done. It was Katharine and I together and the whole cast join us for the number. It’s one of the fun highlights of this year for me. It was a great thing to do.

Is there any kind of competitiveness amongst the cast as there’s so many talented singers?

What’s been so lovely, and it’s probably why they’ve cast the way they have, is that the voices on the show are so different. We have the luxury of having original songwriters involved in the show so the songs are engineered for different voices. Everyone has their own unique style and I think it makes for a better show. Megan has an extraordinary Broadway voice and Katharine has a more poppy voice so they just do different things on the show. It’s great to have those different styles all mashed together really.

What kind of feedback have you had from fans about you and the show overall?

They’ve been really lovely actually. I think they’re in for a few shocks as they think Dev is the perfect boyfriend and there’s some stuff throughout the season that will make them question that. It might be a bit of a shock. The response has been really terrific. What’s interesting about Smash is that people come up to you and really want to talk to you about the specifics of the show like who will get the part (in Bombshell), what’s happening in the show-within-a-show, who’s coming to join the cast. We’ve had some amazing guests with Uma Thurman and some big Broadway stars. People are really interested in the life of the show which is nice and it means people care about the show.

If you had to pick one highlight from season one for viewers to look forward to what would it be?

There’s a moment in episode 9 when Megan and Katharine end up in Times Square a little bit worse for wear which is one of my favourite scenes in the show. It was directed by British director Paul McGuigan who directed Sherlock and it’s one of my favourite moments. Also the season finale as there are some moments in that that are real show-stoppers.

‘Smash – Season One’ is released on DVD through Universal Pictures (UK) on Monday 29th October 2012.

In this article:Raza Jaffrey, Smash