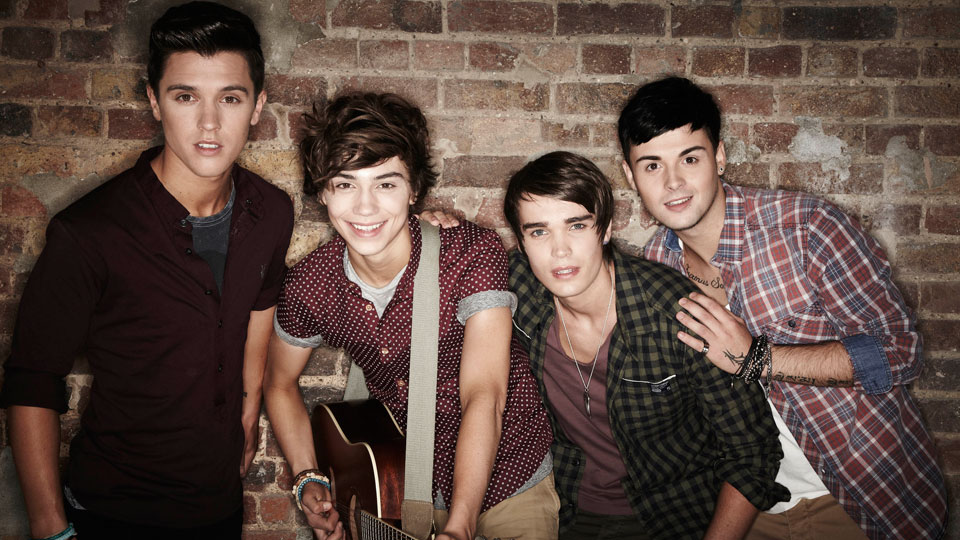 It’s the third week of The X Factor live shows, and we’ve been looking forward to see our favourites all week. What will happen tonight? Will Rylan and Gary make up? Will James Arthur steal our hearts once again?

Dermot O’Leary started the show off tonight with a spot of sexy dancing! We love a bit of Dermot-dancing on a Saturday night. Tonight’s theme was Club Classics. We can’t wait to see which club classic songs the final eleven have in store for us.

First up tonight was Christopher Maloney for Gary Barlow’s team. In his VT, we saw him trying to tackle the dancing. He said: “I’m not a dancer, I’m not a trained dancer – I’m very nervous!” His song tonight was Boy Meets Girl’s Waiting For A Star To Fall – one of our favourite songs. Whilst it was an energetic performance, it didn’t blow us away. He sounded very nervous and it felt like he was just going through the motions. Nicole told him: “Who doesn’t love a warm cheese toasite? Its hard to criticise you, because I’ve seen how much you’ve put into it. One day, I’m going to get used to the jazz hands and glitter. I’m going to embrace it.” Louis said: “Its cheesy, and I love it!” Tulisa said: “First couple of weeks, everyone’s finding their feet. Its official for me – I don’t like it. Its too cheesy. I don’t understand why Gary has chosen this song for you, and he calls Rylan cheesy?” Gary stood by his act. Christopher told Dermot: “I’m trying to make myself better than I am, and I appreciate every comment.”

Next to the stage was duo MK1. We were hoping that they would give a better performance than last weekend, and sing a different song. In their VT, we saw them get a pep-talk by their mentor Louis Walsh. They were both excited about singing a Club Classic song. Their song was Gypsy Woman (She’s Homeless) by Crystal Waters, which then turned into Tinie Tempah’s Pass Out. It was so much better than their efforts last weekend, and we could imagine them on stage in a club performing this. Tulisa said: “Perfect song choice. I kind of wished you’d done Tinie’s song all the way through. I’d have like to hear you rap more.” Gary said: “I agree with Tulisa, the first half was your best performance ever, the second was your worst.” Nicole said: “I thought that was freakin’ amazing! All I know is I wanted to get up and bust some moves!” Louis was very happy with them and said: “That was your best performance yet!”

Jahmene Douglas was next, and in his VT, we saw his pain come through. The papers had picked up on his family’s past during the week, and he said: “Singing has been my sanctuary.” Jahmene’s song was Aretha’s Franklin’s I Say A Little Prayer, in a club-classic style. He sang it very well, but the style didn’t suit him in our opinion. By the end of the song, he did come into his own and belted out a high note. Louis said: “Every week you continue to amaze me. At times, you remind me of Ray Charles.” Tulisa said: “You are adorable. You are amazing. Something about you tells me that your whole life you’ve been waiting to stand on that stage.” Gary said: “Your voice is really something else. I don’t think you need to move around the stage, you look quite clumsy when you move – let your voice do the talking.” Nicole told him: “You’re twenty-two years old, and you have courage and bigger balls than anyone I know.” Go Jahmene!

Next was Jade Ellis. Having had the worst week ever, Jade’s voice went. In her VT, we saw her get upset and cry. We also saw her visit a Doctor who took a look at her voice box. Tulisa said: “She’s a fighter, and she will be singing for her life.” Her song was Yomanda’s You’re Free. Stepping out on stage dressed in gorgeous pink, she looked the ultimate pop star. Whilst the potential is there, she started off quite shaky. As the song progressed, she became more confident in herself and ended on a high. Gary said: “Bawsed on what I heard tonight, I thought you did a pretty good job.” Nicole said: “First of all, you look like a million bucks. The only thing, I just wanted you to own it more. Lyrically, that song was perfect for you. I wanted you to work it! Your tone is so unique.” Louis said: “It wasn’t enough Jade.” Tulisa said: “You’ve had a rough week, you’ve lost your voice, its knocked your confidence, but you got up there and did your best.” We agree.

The gorgeous James Arthur was next to take the stage, and after a very tough week, he was feeling a bit fragile. In his VT, we saw Nicole give him some words of encouragement. His song was LMFAO’s Sexy And I Know It. He totally owned the song and made it his own. James is one super talented boy, and we can imagine going to see him perform and sing along to his songs. To do this to this brilliant song it a feat. Well done James. Louis said: “What a brilliant interpretation of that song. You’re a real professional, and you’ve had a tough week, but you owned that stage.” Tulisa said: “What a great rendition of that song. Tonight, you had fun. I loved seeing that side of you.” Gary said: “Amazing! Amazing! Amazing! This was the performance of the series so far.” Nicole was very proud of her boy.

Girls favourite Union J were next, and after the high of last weekend’s performance, expectations were high for the quartet. In their VT, we saw them get bombarded by lots of fans. Their song was David Guetta and Kelly Rowland’sWhen Love Takes Over. They were brilliant! There’s massive potential in these guys, and we can see why they get bombarded by all the girls. Tulisa said: “Guys, you are finding your feet in the competition. Your fan base is getting stronger and stronger. A wicked performance.” Gary said: “I think we’re witnessing a boy band grow in here. Well done. A bit more harmony and it’ll be great.” Nicole said: “I agree with Gary, and also a bit more energy when you sing.” Louis said: “Its all coming together!”

Rylan was next and oh boy, we were looking forward to his performance. In his VT, we saw his younger pictures and how much he’s changed. We also saw Rylan shave off his beard and his hair. His song tonight was Rihanna’s Don’t Stop The Music. The production was brilliant, but his voice wasn’t good enough. He looked like he was having so much fun up on stage, and he danced very well. If only his voice was up to scratch…! Louis said: “Another great Brian Friedman production featuring you! You come out and you give it!” Tulisa said: “Look, vocals, rusty tonight. Entertainment – still there. Maybe you’re here for all the wrong reasons, but I still want to see you.” Gary said: “For every week you’re here, a talented contestant is going out. This should have been your best performance, but it was your worst.” Nicole said: “He’s the only one dancing on dance night!” We agree with Gary.

Next up was Lucy Spraggan. Lucy has been in the news this week for being drunk and disorderly in the hotel with Rylan, and as a result – they’ve both been thrown out of the hotel. Lucy felt very ashamed of her behaviour, but was ready for another hard week of rehearsals and work. Her song tonight was Titanium by David Guetta, which she sang in her unique style again. It was great, but we’re worried that it could verge on boring. Gary said: “You still surprise is. That was so clever, turning that song into your own. Really great.” Nicole said: “You made that song, and that’s what so endearing about you. You are titanium babe.” Louis said: “I think you’re a brilliant storyteller.” Tulisa said: “You’re twenty one, and if you want to go out and have fun – go, but make sure you turn up to work on time, and you do. Great performance.”

One of our favourite’s was next, the lovely Kye Sones. In his VT, we saw Gary gave him a very honest critique. He told Kye that there were thirty two flat notes in his performance last weekend. Kye had to work on singing in tune. His song was Swedish House Mafia’s Save The World Tonight. Sat in front of a piano, it was very atmospheric. He held his tune perfectly. Nicole said: “It was effortless. It had meaning and feeling.” Louis said: “That was flawless.” Tulisa loved it: “The Kye that we all know and love is back, and lets keep it that way.” Gary said: “I’m sorry for being so hard on you that week. You are back. Great performance.” Well done Kye!

Up next was the lovely District 3 boys. Having been saved from elimination last week, they were all very grateful to still be there. In their VT, we saw them try to work on their energy and performance. Tonight, their song was Madcon’sBeggin’. They performed amazingly well, and it was a good performance! Tulisa said: “I’m happy you were in the bottom two last week, because it gave you a kick up the bum. It was so much better than last weekend. Tonight, well done.” Gary said: “I have to say, you are the revelation of tonight. You really are. Being in the bottom two last week was the best thing that ever happened to you. Tonight was more you. Well done.” Nicole said: “You’re giving the other groups a run for their money after that. Not only did they dance, but your harmonies and vocals were so solid.” Louis was so happy for his boys. We might start to be District 3 fans…

The last of the girls, and closing the show tonight was the very talented Ella Henderson. In her VT, we saw how elated she was after seeing a Tweet from Adele. Preparing for tonight’s show, we saw Ella trying to combine dancing with singing and she was very scared. Her song was Florence + The Machine’s You’ve Got The Love. Ella proved that she could do both, sing and dance. She mesmerised everyone of us. She has that type of voice that you just want to listen to all day long. Gary said: “Another great vocal performance from you. I think the dance moves cheapened your act, you are just great singing.” Nicole said: “I actually thought you were effortless in your dancing. I want to find something to critique you, but I can’t. You’re beyond your years.” Louis said: “In a few years, you’ll be an international music star!” Tulisa copied Kelly Clarkson’s quote from last year, and said: “Who knew you could do up-tempo – aww!”

So that’s all for tonight. We loved Ella, District 3, James Arthur and Kye Sones. Who will leave tomorrow night?

The X Factor Result Show will be a hard one. Catch it at 8pm on ITV1.