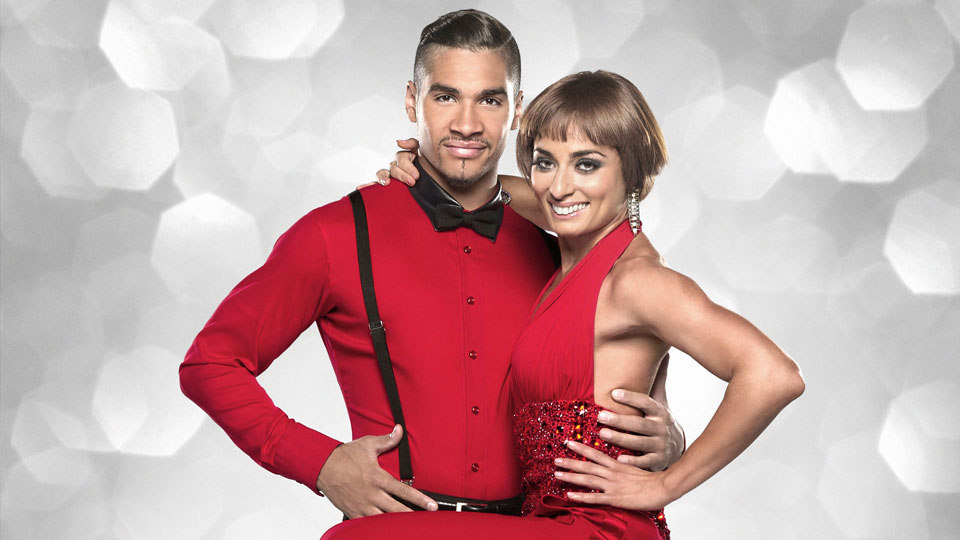 Strictly Come Dancing said goodbye to its first celebrity last week as Johnny Ball hung up his dancing shoes after losing the dance-off to Richard Arnold. The remaining 13 celebrities had to go straight back into rehearsals in preparation for tonight’s Hollywood themed Strictly live show.

Each of the couples tonight had to dance to a song from a Hollywood movie injecting even more glitz and glamour than usual. The Strictly professionals kicked off proceedings with a spectacular routine choreographed to Ricki Lee’s Can’t Touch It from Sex and the City 2. Kristina Rihanoff really shone as she took a central role in the routine and looked absolutely stunning.

Once the professionals left the floor it was onto the main show as Bruce and Tess arrived on stage to introduce the remaining 13 couples but not before Craig Revel-Horwood walked across the floor as Tin Man from The Wizard Of Oz prompting a sing-song about not having a heart. Appropriate we think…

Kicking off tonight’s show was TV presenter Fern Britton with her professional partner Artem Chigvintsev. Reflecting on last week Fern said she thought it was ‘fantastic’ expressing happiness at her score and comments from the judges. This week Fern danced the Charleston in a Mary Poppins themed routine. Was the routine practically perfect? We thought it was a lovely routine danced well and a perfect show opener. What did the judges think? Len said he thought it was entertaining but wished there’d been more Charleston in it. Bruno told Fern she had to go for it a bit more but liked her effort. Craig said he thought the routine was laboured though he admitted he liked her rather fancy split through Artem’s legs. Darcey said Fern’s energy was better this week and offered her the job of Mary Poppins to her kids.

Second on the dance floor was Olympic cyclist Victoria Pendleton with her partner Brendan Cole. Last week Victoria improved after her disastrous week 1 performance. In her intro VT Victoria admitted she was struggling with the performance aspect of her routine as it didn’t come naturally to her. With a Rumba inspired by An Officer and a Gentleman could Victoria connect with Brendan and impress the judges? Bruno said that Victoria almost ‘boiled over’ as she was beginning to sizzle pointing out her mis-steps in the middle of the routine. Craig said he was ‘beginning to see an actress emerge’ despite the mistakes throughout the routine. Darcey said she spotted some sensual moves and gave her some tips about how to straighten her fingers. Len said he thought she did really well.

Michael Vaughan was likely hoping for a better week than last week after he was told he was the worst dancer in the competition. In his intro Michael said he thought he’d done quite well and expressed hope of getting some positive feedback. Tonight Michael danced a routine inspired by The Full Monty with his partner Natalie Lowe. Did he make a better impression on the judges with his Cha Cha Cha? Craig said ‘hot it was not’ pointing out the timing issues for a second week. Darcey said she was happier with his performance as his top and lower body were more connected. Len said there was one moment of lost timing but generally liked the routine. Bruno said he was disappointed as he was expecting the full monty to distract him from the bad technique and lack of musicality.

Jerry Hall should have no problem tonight as she’s the embodiment of Hollywood. The last two weeks have left the judges disappointed as it seems she’s not really putting in a great deal of effort. In her intro Jerry said she took the criticism on board but thought the judges were a bit harsh last week. Dancing the Quickstep with Anton Du Beke in a routine inspired by The Graduate, Jerry was hoping to finally win the judges over. Could her Mrs Robinson score her some praise? Darcey said the Quickstep suited Jerry but criticised her for fading at the end. Len said the routine was a bit ‘Upstairs, Downstairs’ before accidentally being a bit smutty. Craig said the whole routine would have been better behind the screen that was used as part of the dance.

Former EastEnder Sid Owen was next onto the dance floor. He’s been doing well so far despite making a few mistakes last week. Tonight Sid’s routine was inspired by Rock Of Ages and in the intro Ola said she thinks he’s a bit embarrassed by some of the steps. Dancing the Tango could Sid overcome his embarrassment and continue his winning streak? Len said the routine took too long to get into and criticised Sid for not being aggressive enough. Bruno said the Tango part of the routine wasn’t good. Craig called it ‘clompy’. Not a good week for Sid then?

Girls Aloud singer Kimberley Walsh has been one of the best dancers on the series so far and she’s had two very good weeks. Kimberley said she thought Len’s comments were fair but she didn’t expect him to be quite so angry with her. This week Kimberley took to the floor with her partner Pasha Kovalev for a Quickstep inspired by Summer Stock. They got a standing ovation from the audience but did the judges like it? Bruno said Kimberley captured the spirit of the song whilst Darcey said the attack was great and her line was better. Len said he ‘liked’ it this week and commented that it was light and enjoyable.

Denise Van Outen topped the leaderboard last week after impressing with her Jive. Tonight the tempo was slower as Denise danced the Foxtrot in a Toy Story inspired routine. Her intro showed her having lots of fun with her professional partner James Jordan but did they actually manage to rehearse? Craig said Denise had ‘great posture and great control’, Darcey said that she can really dance and Len said the dancing was ‘excellent’. Bruno said they set up the story well and retained the characters throughout the Foxtrot. Another good week for Denise then? Can she top the leaderboard again?

Actor Colin Salmon has been doing pretty well this series with his professional partner Kristina Rihanoff. As it was Hollywood Week tonight, Colin danced a James Bond inspired routine but the intro VT showed that it wasn’t the easiest of weeks as he had to fly to Vancouver to shoot scenes for his new show Arrow. Did they manage to rehearse enough? Could they pull off a convincing Argentine Tango? Darcey said she wanted to see a dirtier secret agent from Colin and advised him to take more risks. Len said he was ‘more shaken than stirred’ and criticised the lack of Argentine Tango in the routine. Bruno said that Kristina’s moves distracted from Colin’s dancing whilst Craig said he loved the whole routine offering no criticism.

Richard Arnold found himself in the bottom two last week and managed to escape being voted off. The Quickstep is the routine that Richard had to get to grips with this week with his professional partner Erin Boag. Inspired by the Dolly Parton movie 9 To 5 could Richard improve enough to keep him out of the bottom two? Len said it wouldn’t get a star on the Hollywood Walk Of Fame but said he liked it. Bruno said he expected a Dolly-fest but was pleasantly surprised pointing out Richard’s improvement. Craig said he ‘didn’t mind it’ and Darcey said it was his best dance so far.

Following in Richard’s footsteps was Dani Harmer and her professional partner Vincent Simone. In her intro VT Dani said she was very excited to be dancing a routine inspired by The Wizard Of Oz. We also saw her struggling with sore feet thanks to her dancing shoes. Could she overcome her sore feet to pull off a stunning Foxtrot? Bruno said that ‘friends of Dorothy’ would be pleased and he called the routine ‘pretty’. Craig said he loved the routine but advised Dani to make sure she doesn’t look at the floor. Darcey said the routine was smooth and Len said he though Dani did ‘great’.

Next up tonight was Lisa Riley with her professional partner Robin Windsor. It’s safe to say Lisa has been the biggest surprise of the series so far after finishing third on the leaderboard last week. Reflecting on last week Lisa said she felt like Cinderella at the ball. This week Lisa danced the Jive in a Dick Tracy themed routine. Would Lisa continue to surprise with her dancing skills? Receiving the second standing ovation of the night, it seems that the audience still love her. Craig said he gets very excited watching Lisa and said the routine was brilliant. Darcey said she thought it was fabulous but that the routine needed a bit more bounce. Len called Lisa a ‘great big bundle of joy’ and Bruno called her a ‘spunky lady’ saying he loves watching her.

Westlife singer Nicky Byrne hasn’t had an easy ride since joining Strictly Come Dancing after receiving negative comments two weeks running. In the intro Nicky commented that his Saturdays were going from bad to worse. This week he danced a Quickstep inspired by Jim Carrey movie The Mask. Could he finally get the luck of the Irish? Darcey said she loved the energy and attack but told him to watch the bounce in his shoulders. Len said this week’s routine was ‘full of life’ but told him to straighten his legs. Bruno said Nicky needed a mask every week as he’d improved so much this week. Craig said Nicky was starting to win him over praising the characterisation of the performance.

The last couple to dance tonight was Olympic gymnast Louis Smith and his professional partner Flavia Cacace. Last week Louis won lots of praise from the judges and he is quickly becoming one of the frontrunners for the glitterball. Tonight Louis danced a Salsa inspired by Dirty Dancing but did he have the time of his life? Receiving the third and final standing ovation of the evening it seems that Louis could dance his way right into the final. Len said he thought the lift at the end was good but felt the Salsa lacked the attack it needed. Bruno called Louis ‘smooth and well placed’ and Craig said it was ‘fantastic’ and ‘under-stated’. Darcey said she spotted a bit of emotion between Flavia and Louis but asked Louis to go to a club and free himself up.

With that Hollywood Week came to an end and all 13 couples had done all they could to ensure their place in next week’s live show.

The full leaderboard for the evening was:

Tune into BBC One tomorrow night at 7.20pm to find out which couple leaves Strictly Come Dancing.