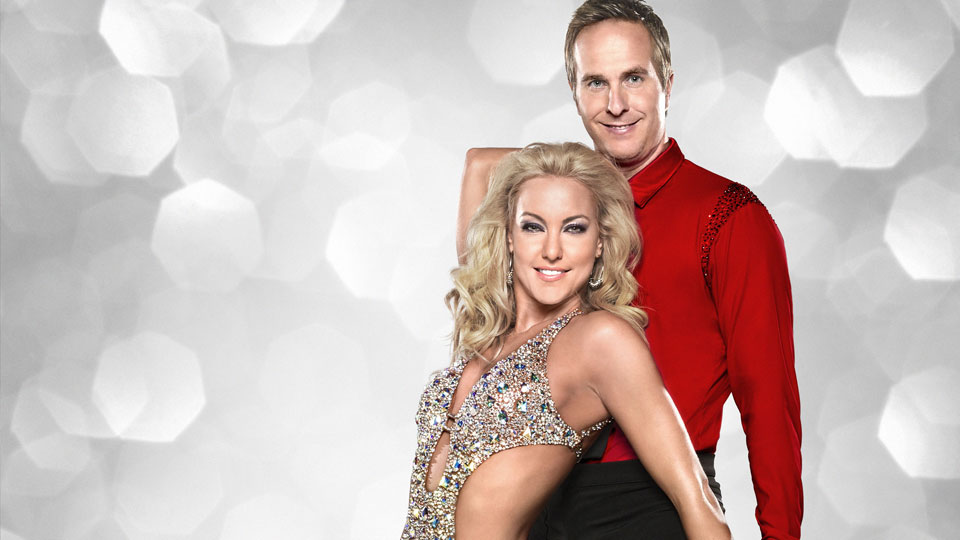 Strictly Come Dancing got serious tonight as the 14 contestants fought for their place in the competition. This weekend sees one couple leave the dancefloor for good and as always no one wants to leave first.

Last weekend’s double bill highlighted Lisa Riley, Kimberley Walsh, Louis Smith, Sid Owen and Denise Van Outen as early favourites to take the glitterball. Would tonight change the look of the leaderboard or did the celebrities show some consistency? The points from last week will be added to the points from tonight’s show before the public vote opens so you can decide the fate of the celebrities.

Kicking off the show tonight was Westlife singer Nicky Byrne and his professional partner Karen Hauer. Last week the couple got slated for including an illegal lift and from the intro VT it seems that Nicky’s confidence was knocked. Tonight they danced the Cha Cha Cha but did they fare any better? Len explained he was a traditionalist and wasn’t keen on the ‘boyband dancing’ saying there wasn’t much he could rave about. Bruno said Nicky was more ‘switched on’ but criticised him for being out of sync in the second half. Craig said it was too much like a zumba class but noted that he liked Nicky’s rotation action. Darcey praised the confidence and attitude of the dance but agreed with the other judges that there wasn’t enough Cha Cha in the routine.

Second up was Colin Salmon who surely wouldn’t get quite the mauling that Nicky has for the second week running? In his intro VT Colin promised to take it to the next level with his performance tonight. Dancing the Viennese Waltz with his partner Kristina Rihanoff, could Colin match last week’s performance? Bruno praised Colin’s lines but said in hold he needed more drive and musicality. Craig agreed with Bruno but said he was dancing to his height which was ‘good’. Darcey praised Colin’s elegant frame but told him to be careful not to stoop. Len said he thought the performance was a bit timid but praised Colin’s acting ability.

Dani Harmer was next to dance and hoping to better her 21 points from last week for her Waltz. In her VT Dani explained that the nerves really got to her last week which she believes affected her performance. This week’s performance should see her let her hair down as she dances the Salsa with her partner Vincent Simone. Craig said the dance suited smaller people saying he loved the energy of the routine commenting ‘great work’. Darcey said it was great to see her having fun but asked her to use her hips more in the steps. Len praised Dani for giving it some ‘welly’ and said he liked the routine. Bruno said Dani ‘blossomed’ tonight with her performance commenting that the content was great but agreed with Darcey that she needs to use her hips more.

Fern Britton didn’t rocket up the leaderboard last week after her underwhelming Cha Cha Cha. Despite giving it her all she didn’t quite win over the judges. This week she danced the Waltz and from the look of her VT she wasn’t finding it particularly easy to pick up. Could she pull it off? Well there was more skirt wafting but what did the judges think? Darcey said that Fern gives a beautiful feeling when she dances but warned her to keep the movement smooth. Len commented on the wafting again but said that Fern was better than last week meaning she’s heading in the right direction. Bruno told Fern to be careful with her hands agreeing with Darcey that she needs to follow through. Craig gave some constructive criticism but said the way Fern moved around the floor was good.

Next to dance was TV critic Richard Arnold. Last week he was criticised for not showing enough personality in his Waltz (erm isn’t it supposed to be a subdued dance?). This week Richard danced the Cha Cha Cha with his professional partner Erin Boag. Did his personality shine through and were the judges happy? Bruno said Richard had a ‘split personality’ labelling the performance ‘blissfully barmy’ but admitted that he enjoyed it in a ‘sick way’. Craig wasn’t convinced that Richard wanted to take Erin to the love shack and criticised his walks saying they ‘belonged in a drag show’. Darcey said she saw the side of Richard she wanted to see but told him he needed to lead Erin. Len criticised Richard’s arm placements and asked him to concentrate on the dancing rather than the performance.

Victoria Pendleton was surely hoping for a better week than last week after her poor performance. Forgetting her steps throughout the routine, she ended up in tears by the time she reached the judges table. In her intro VT she vented her frustration at forgetting the routine whilst revealing she struggled with her spins. Dancing the Foxtrot this week could she do any better? Len called the routing ‘clean, classy and confident’ but told her to work on her transitions. Bruno said she was ‘back in the race’ but advised her to work on her turns so she can further improve. Craig praised Victoria for remembering the routine this week and Darcey commented that it was clear the nerves had gone this week.

The dance floor called for Michael Vaughan next and last week he didn’t do too bad with his Waltz. In the VT his partner Natalie Lowe said she was pleased with his performance but admitted she was nervous about him nailing this week’s routine. Dancing the Jive could Michael build on last week’s promise? Bruno said Michael was like a ‘wild goose’ criticising his flat footwork and saying he couldn’t have performed it worse. Craig said it was ‘one of the oddest Jives’ he’d ever witnessed whilst Len praised the gusto but agreed with the other judges that it was bad.

Louis Smith sent Darcey’s heart fluttering last week but could he do it for the second week running? Last week he was near the top of the leaderboard with his partner Flavia Cacace and tonight he performed the Viennese Waltz. In the VT Louis revealed that Darcey embarrassed him slightly last week and revealed that he was working on his smile for this week. Darcey said she liked the routine but told Louis that he needs to form an emotional connection with Flavia. Len said he saw ‘great posture’ and the ‘best dance’ he’d seen of the night so far. Bruno compared the routine to a ‘Valentine’s postcard brought to life’.

Next up was TV and radio presenter Denise Van Outen who wowed the judges with her Waltz last week (with the exception of Len). This week Denise tackled the Jive with her partner James Jordan. In the VT Denise admitted she was struggling with the spins and revealed she was suffering from mild whiplash. Could she work through it and wow the judges again this week? Darcey was very impressed saying Denise got the style of the Jive instantly but told her to work on her shoulder movements. Len called the routine ‘fabulous’ and admitted he had been disappointed with Denise last week. Bruno called her ‘Denise the goer’ whilst Craig said it was ‘fab-u-lous!’.

We wouldn’t want to follow in Denise Van Outen’s footsteps but unfortunately Johnny Ball had to. Last week he didn’t impress the judges with his Cha Cha Cha with comment being passed that he failed his MOT. This week Johnny danced the Foxtrot with his partner Iveta Lukosiute. In the intro VT Iveta revealed that Johnny has been putting the hours in to make sure he improves. Did it show in his performance? Well a few of the audience members gave a standing ovation but did the judges like it? Len commented that Johnny did everything with enthusiasm and praised the content of the routine. Bruno said Johnny hit some nice lines when he was out of hold but said work was needed for the moments he was in hold. Craig criticised Johnny’s posture but said it was a ‘decent effort’. Darcey called Johnny’s performance ‘wonderfully better than last week’.

One of the biggest surprises of last week was how good former EastEnders actor Sid Owen was. He finished fourth on the leaderboard for his Waltz with partner Ola Jordan. In the intro VT it seemed that fireworks occurred during rehearsals for the Salsa. Did Sid manage to pull off all the right moves on the night? Bruno liked the ‘Sid Vicious attitude’ but said there were lots of timing mistakes throughout the routine. Craig agreed with Bruno and said it was a bit ‘hit and miss’ but admitted he ‘loved’ the routine. Darcey said Sid partnered Ola brilliantly but wanted to see more hips. Len said the routine was more ‘Kingston-upon-Thames’ rather than ‘Kingston, Jamaica’ and asked Sid to give a bit more next week.

Girls Aloud singer Kimberley Walsh brought along bandmates Nadine Coyle and Nicola Roberts to spur her on this week. Last week she finished second on the leaderboard and in her intro VT she admitted she was pleased with her performance. This week Kimberley danced the Foxtrot with her professional partner Pasha Kovalev. Did she bring the ‘wow’ factor back again this week? Craig she he thought it was ‘absolutely gorgeous’ but asked Kimberley to pull her jaw back a bit as it was protruding. Darcey said Kimberley created a ‘beautiful mood’ and Len said it was ‘limp’ without enough ‘conviction’. Bruno said he loved the performance but said Kimberley needs to work on her hold.

The penultimate couple to dance tonight was Jerry Hall and her partner Anton Du Beke. Last week Jerry was criticised for her minimal approach to the Cha Cha Cha. This week Jerry danced the Foxtrot. Would she be able to prove to the judges that she can actually dance or is she set to become the Nancy Dell’Olio of the series? Darcey said she could tell that Jerry had been working harder but told her to watch her posture as she lost it fairly early in the routine. Len said Jerry was definitely ‘giving the others a chance’ referring to Jerry’s excuse for not dancing much last week. Bruno said that Jerry is stuck on Anton like Velcro whilst Craig said it looked like Anton was dancing with Mr Burns from The Simpsons.

The last celebrity to dance tonight was actress Lisa Riley. Last week Lisa surprised us all by topping the leaderboard with her energetic Cha Cha Cha. In her intro VT she admitted she couldn’t believe how well the routine had gone. This week she danced the Viennese Waltz with her partner Robin Windsor. Could Team RiRo top the leaderboard for a second week? Well the standing ovation from the audience (the only one of the evening) showed that they loved it. Len said that Lisa needed to work on being in hold whilst Bruno said Lisa always entertains but needs to let Robin lead. Craig said Lisa danced with ‘great dexterity’ and said it was graceful. Darcey said she loved the focus in Lisa’s eyes but told her not to grab Robin quite so enthusiastically.

Tonight’s leaderboard was as follows:

This means the full leaderboard after combined scores is:

Tune into Strictly Come Dancing tomorrow night at 6.50pm on BBC One to find out which couple leave the competition.