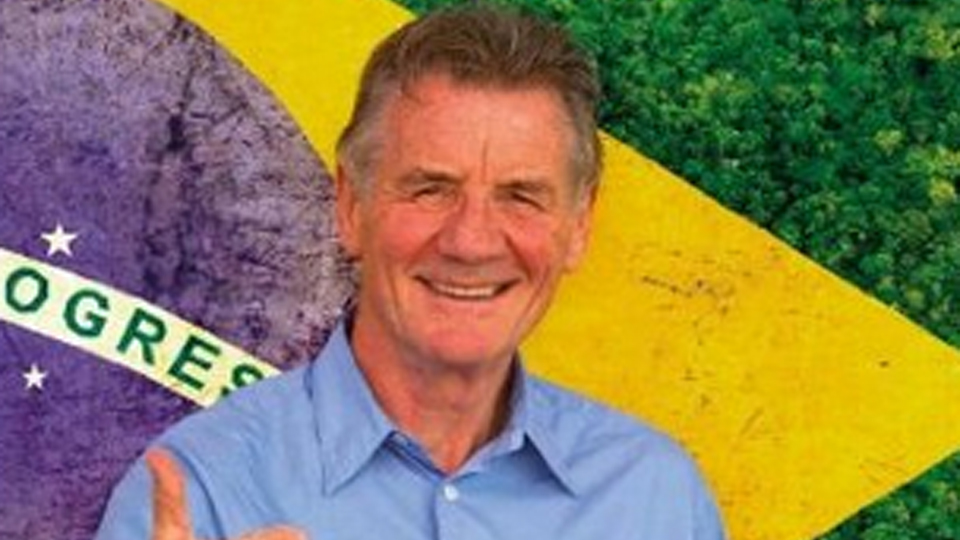 Inveterate traveller Michael Palin’s latest exploit took him to the sprawling South American country of Brazil. Naturally, he was trailed by a camera crew, who filmed the former Monty Python-star and all round nice chap during his sojourn for a BBC travel series of the same name.

Brazil is the book that accompanies the series. It’s a diarised account written by Palin and neatly set out in chronological rather than geographical order (watch out for occasions when he leaves his established base for a day trip only to return to his last destination). Michael Palin is an extremely likeable and charming presenter, and he captures his general affability and quick wit on the page too. We recently reviewed Palin’s latest novel, The Truth, and found it very well written. The prose of his travel writing is even better: it’s economical, descriptive and rarely repetitive, making for a fluid, compulsive and engrossing read. It’s where Palin has really found his forte.

The tome is visually arresting too. From vibrant cover art to full-colour photographs on most pages, it’s a sumptuous guide, and the more serious connoisseur of the travel writing genre will enjoy the route maps. Double page pictures of Copacabana Beach help to put into context Palin’s descriptions, but there’s never a sense that he’s allowing the images to do the donkey work for him.

Palin starts his journey with the Yanomami tribe of Demini, who have lived in the New World remote from the advances and encroachments of other civilisations for thousands of years. The Amazonian tribes are not altogether remote any longer it would seem, as in return for filming with the Wauja, gifts must be offered and accepted. These days the tokens of hospitality are up-to-the-minute laptops and multifarious technical wizardry!

Leading with the Amazonian tribes allows Palin to gently air some politics about the threats their way of life faces from the damming of rivers to various laws that have been passed with seemingly only the city-dwellers in mind. The mere existence of the tribes showcases the huge variety of cultures and peoples that exist over such an enormous landmass.

Where the tribes live in small forest clearings, the massive Brazilian cities are home to millions of people, and quite early on Palin abandons any hope of tying the country into a coherent whole, instead opting to offer his take on the different localities, and quickly understanding that the Brazilians don’t generally have much curiosity about their neighbours in other towns, cities and villages.

It’s hard to believe you’re reading about the same country when Palin describes witnessing the religious festivals of Sao Luis and Salvador that mix Christianity with shamanistic African superstitions; and later takes part in the Gay Pride march in Rio De Janeiro. It could be argued that the Brazilian character is generally outgoing with a penchant for carnival atmospheres, but when he’s quizzed about his position on gay marriage and disappoints his host with a liberal line, it’s apparent that there are deep divisions existing in all areas of a country that eludes easy description.

Like any good historian and travel writer, Palin remains objective when he encounters values he doesn’t share, and he generally finds something positive to say even about the most inhospitable of areas. It’s not until he reaches the congested roads of Sao Paulo towards the end of his journey that there’s a feeling his characteristic optimism is starting to waver.

As you would expect from Michael Palin, there’s plenty of delicious comedy on the pages. He beautifully captures an encounter with a Candomblé priest in Salvador, who predicts his fortune, and often includes humorous (sometimes unintentionally so) remarks made by his guides.

With Brazil, Palin tackles the impossible task of describing a huge country with a booming economy but with massive divisions between rich and poor that’s home to diverse cultures that aren’t always peaceful neighbours. He succeeds by taking each destination in turn and looking at it with the fresh eyes of a foreigner and with the objectivity of a seasoned traveller. Needless to say it’s a far from comprehensive account of the country, but the intention is for the host to put across his ideas based on what he’s seen. On this journey, as on all his others, Michael Palin is a witty, informative and gently persuasive guide.