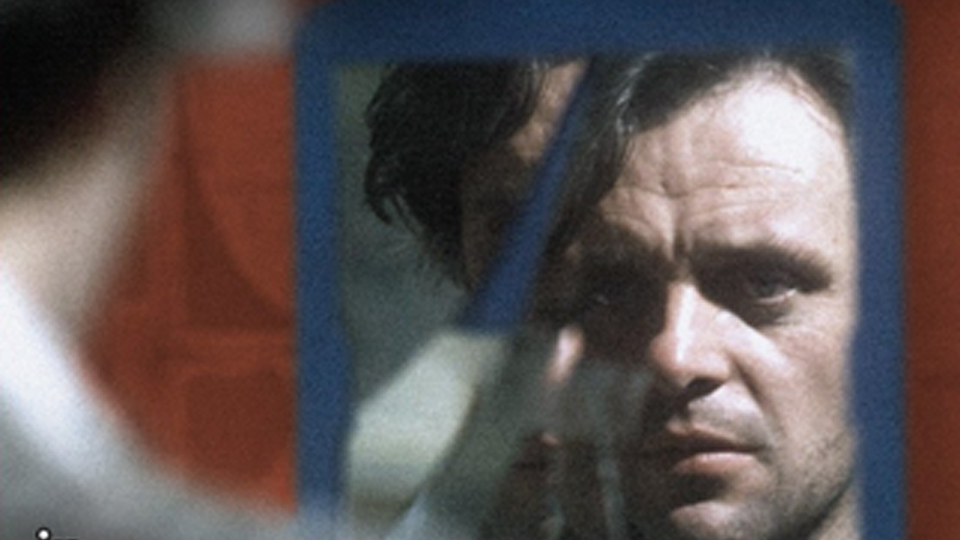 Before Anthony Hopkins was an A-list Hollywood actor commanding multi-million dollar per movie fees, he forged a solid reputation for himself as a fine character actor on British stage and screen during the late 1960s and 1970s. Thus, it’s no surprise to see his name given top billing for The Arcata Promise – a 1974 instalment of ITV Sunday Night Drama (their similarly long-running answer to the BBC’s Play For Today). It may seem odd to see a movie actor held within the narrow confines of a television studio in a production shot entirely on tape, but some of Hopkins’ other work of the era, such as starring in the BBC’s War And Peace and Othello, remain as a legacy to an actor who rose through the ranks and worked hard for the global stardom he would go on to achieve.

Undoubtedly the considerable weight of Hopkins’ name is the major drawer for The Arcata Promise and it’s a fine reminder of his considerable qualities. Hopkins is outstanding in the part of Theo, a washed-up Shakespearean actor whose alcoholism has created personal and professional crises. Art imitating life, perhaps, as Hopkins, whose own demons of self-doubt and lengthy battle with the bottle are well-documented, plays very close to the bone here. As a consequence he is not only entirely believable as an unhinged and psychotic actor, but he’s utterly spellbinding too. It’s impossible to take your eyes from Hopkins for the hour and a half duration of this superb television play. It’s possibly the closest Hopkins has ever come to playing himself, and he delivers one of his most electrifying performances. The Arcata Promise showcases one of the greatest actors of his era, who has lamentably spent his career since the mid 1990s phoning it in for the money in Hollywood (our loss, but who can blame him?).

The Arcata Promise documents in a non-linear narrative the reversal of fortune of the once acclaimed actor Theo (Hopkins), and as if to prove the point it’s imaginatively interspersed with clips of Theo playing Richard II on stage. Now residing in a dingy bedsit and suffering from paranoid schizophrenia, Theo has an inner duologue with himself – or rather, the voice in his head, which enables Hopkins in voiceover to perform two different versions of the same character in the play. Through flashbacks we see Theo in happier times, in an expensively if tastelessly furnished apartment with Laura (Kate Nelligan), a woman many years younger. He recalls a promise he made to her during their trip to Arcata about cherishing her forever more, but as the scenes progress the lovers become far more distant, until Theo’s fits of violent rage push Laura to the edge and he is left haunted by his failed promise and the ghosts of his past.

The Arcata Promise is penned by David Mercer, who was a highly promising playwright before his sadly premature death in 1980. Here he seems to be inspired by Harold Pinter and Joseph Losey’s The Servant, since a third character is introduced to the mix in the form of camp valet Tony (John Fraser), whose odd relationship with Theo almost threatens to derail the entire production, though the characters are so well-written they keep viewers intrigued. The first act is told with almost unremitting focus on Theo, which keeps Hopkins on screen and hooks the viewer with a fascinating premise, so much so that when the valet arrives one almost resents his presence. John Fraser is a great actor though, and has also clearly picked up on the homage to The Servant, with his supercilious Tony owing more than a slight debt to Dirk Bogarde’s Mancunian Hugo Barrett.

As Laura, the object of Theo’s obsession and downfall, the young Kate Nelligan brings a suitably spectral beauty and an abundance of vulnerability. The moments between Nelligan and Hopkins are raw and powerful: but the scenes where Hopkins, alone in a bedsit, wrestles with his own inner conscience are simply breathtaking and the most memorable elements of the production.

The Arcata Promise is a curiosity, but a hugely enjoyable one. It’s unusually but brilliantly written drama, and in Anthony Hopkins’ Theo it boasts an immaculate and detailed portrait of self-destruction. It stands on its own merits as a great example of an hour and a half-long television play, and as a quite brilliant piece of dramatic entertainment.