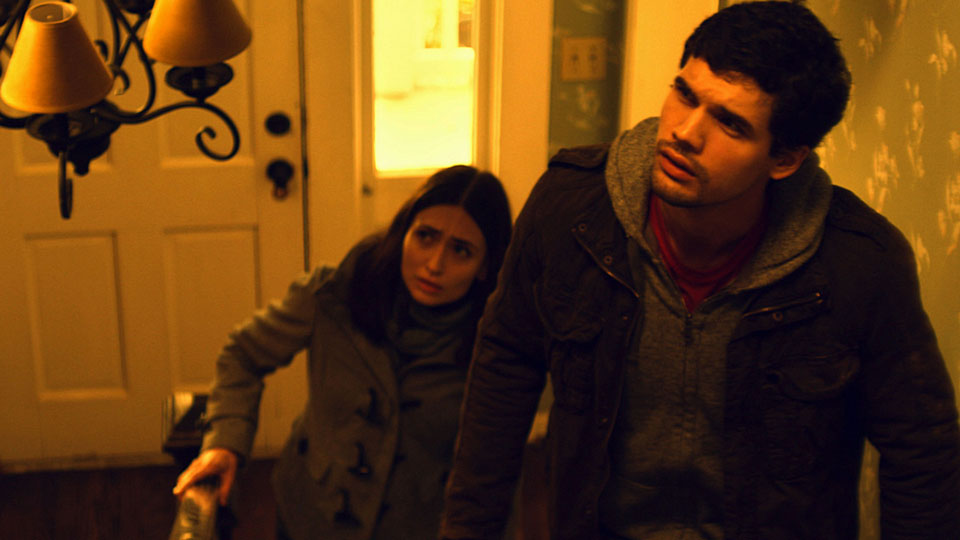 Freddy (Steven Strait) and Ana (Karolina Wydra) meet by chance on a bus back to their hometown of Pearl. As they get to know each other the bus they are travelling on is hit by something. The next thing they know time has moved on and they wake up at home. Soon they discover that they are the only two people left in their town and a black smoke is encircling them threatening to take over the town. As they struggle to discover what is going on, their pasts return to provide clues about how to get out of the nightmare they are trapped in. Will they defeat the black smoke and return to their normal lives?

After is the new movie from Ryan Smith and received its UK premiere today at Frightfest. Advanced word was incredibly mixed but we liked the sound of this alternative creature feature. Sadly despite an intriguing opening, the film soon falls to pieces and hovers around mediocre. Whilst the premise is definitely a worthy hook, it’s as if the writer/director didn’t quite now what to do to turn it into a satisfactory story. Borrowing elements from Pans Labyrinth and Silent Hill, After is a mish-mash of genre movies that lacks a cohesive or engaging story.

In the first half of the movie you are genuinely interested to find out what’s going to happen to Freddy and Ana. Pretty much everyone, including ourselves, saw the twist coming a mile off, so the second half didn’t pack the punch it needed to. Logic tells you there’s only two ways the movie could go after the first 15 minutes and anyone expecting a seriously clever twist will be sorely disappointed. There is some genuine tension when Freddy and Ana venture into the black smoke for the first time and the creature that follows them for the second half of the movie is quite scary (until you actually see it).

Quite a lot of things don’t make sense in After but one of the most baffling is how Ana transforms from an American little girl into a Polish woman. Karolina Wydra – best-known for playing House’s wife in the hit show’s last season – puts in a decent performance but her accent doesn’t convince as American. She’s also hampered by some truly hideous dialogue and unfortunately many of her lines had the audience in hysterics. Steven Strait seems to have borrowed Keanu Reeves’ vacant expression for his turn as Freddy and he’s just not that great.

By the end of the movie the majority of the audience was laughing hysterically. The combination of random story, corny dialogue and an ending worthy of a bad soap opera means that After never rises above mediocre. We’ve seen a lot of films at Frightfest this year and we’d definitely rank this one near the bottom of the pile. Sounds good on paper but in practice it’s pretty awful.