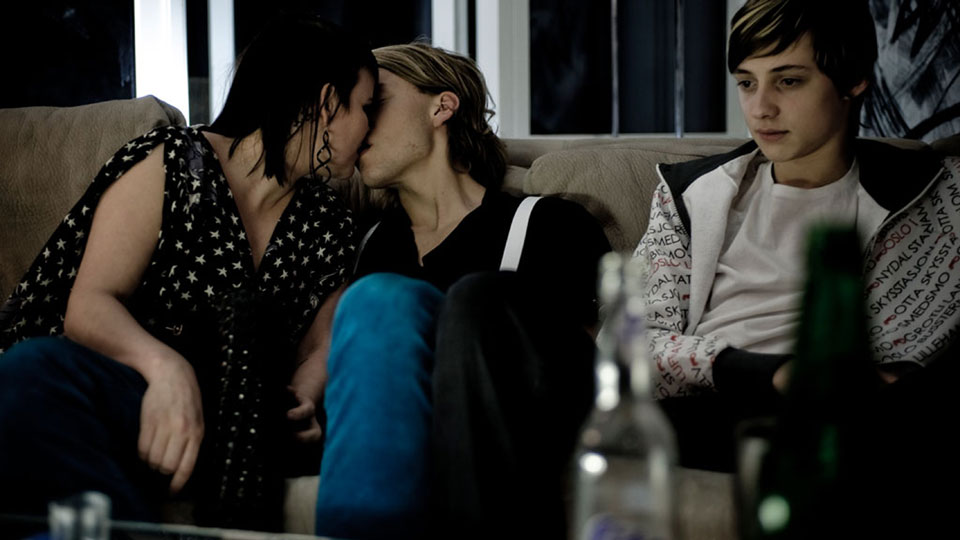 Gabriel’s (Atli Oskar Fjalarsson) life changes whilst he’s away from home studying in Manchester. On the last evening of his trip, Gabriel shares a kiss with handsome Markus (Haraldur Ari Stefansson). Despite a fledgling romance looking to be on the cards, the two teenagers go their separate ways once they return home with Gabriel trying to hide his sexuality from his family and friends. When Marcus shows up again, Gabriel is forced to make some difficult decisions as his life, and the lives of his friends, slowly begin to fall apart.

Jitters is a coming-of-age drama that explores growing up, gaining your independence and dealing with your sexuality. Whilst the main storyline pulls around Gabriel, Jitters actually focuses on an ensemble. Greta (Birna Run Eiriksdottir) is desperate to get away from her mother and discover who her biological father is whilst Stella (Hreindis Ylva Garoarsdottir) struggles with an over-protective grandmother who won’t let her live the life she wants. Both girls’ struggles impact on Marcus whilst he keeps his personal struggle to himself.

The film will inevitably draw comparisons with Skins; after all both feature a young cast of characters all trying to find their place in the world. Where Skins has become more sensationalised, Jitters stays within the realms of realism making the teenagers easy to relate to and sympathise with. It deals with themes of love, sexuality, drugs and family life and does so in a way that is matter-of-fact rather than sensational.

The young cast do a fantastic job with Fjalarsson in particular putting in an impressive performance. He perfectly captures his character making Gabriel’s struggle realistic and relatable. Which gay teen can’t remember the first boy they kissed that threw their emotions into turmoil? The way his story unfolds is believable and his performance is fantastic.

Jitters is everything Skins wishes it could be – raw, honest, passionate and bursting with teenage drama. With an edge of realism rarely seen in films of this nature, Jitters is an engaging, entertaining and heartbreaking watch that will demand repeat viewings. We recommend you get yourself a copy of this and watch it with your teenage children – you, like they, may learn a thing or two.