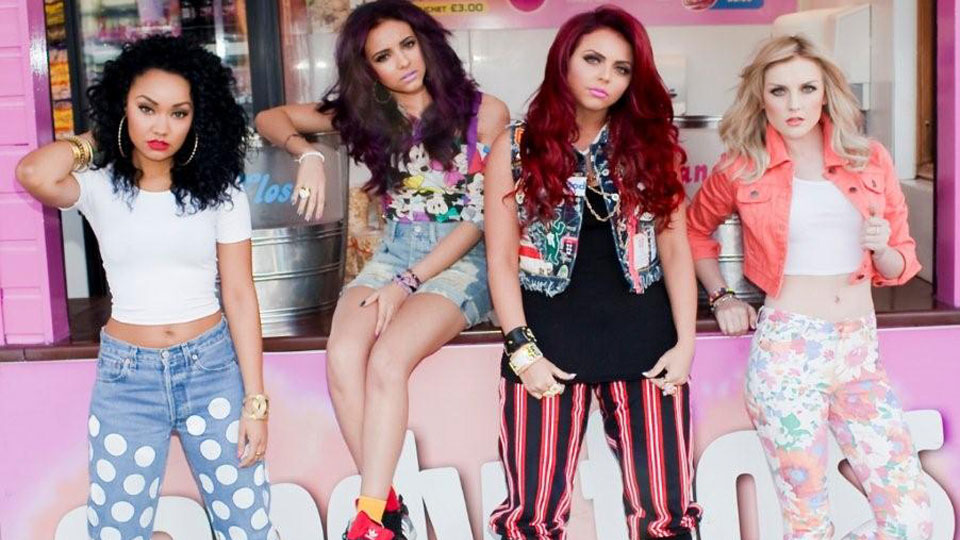 The final has arrived, and after a week of campaigning by Little Mix, Marcus Collins and Amelia Lily, it was time for them to show us why they should be crowned The X Factor 2011 winner!

Live from Wembley Arena for the first time in X Factorhistory, the atmosphere looked electric tonight. The nerves must have hit the contestants hard.

The X Factor started tonight with the gorgeous Dermot O’Leary doing a dance segment of his own in front of 10,000 people. This has been one of EF’s favourite moments since X Factor has began! Go Dermot!!

The first performance of the night were the X Factor final three performing Take That’s Greatest Day – live! It was a great performance, and a change to see them all singing live together, and not doing the whole miming thing. Marcus Collins really shone through in this performance for us.

Marcus Collins was the first act to sing by himself tonight. In his VT, we saw him going back to Liverpool for the traditional ‘Homecoming’ section. He went back to his old school, and he went home to see his family! He also did a gig at the Liverpool One Shopping Centre. Marcus’ first song tonight was Outkast’s Hey Ya! It was a very ‘Marcus’ performance, and the song suited him. But it did feel very predictable. Louis said: “You are what the show is all about!” Tulisa said: “Marcus, you did it!! You deserve it!” Kelly told him: “You came up here and had such a good time. I love it! Congratulations on such a great performance.” Gary was so happy with his boy and said: “I’m so proud of you!”

Next up was Tulisa’s little muffins, and EF’s favourite, Little Mix. Their song was Florence And The Machine’s You’ve Got The Love. The arrangement was brilliant. The harmonies were on par, and they also had some leather-clad backing dancers! EF loved it!

Amelia Lily was next up. The comeback-kid went back to her home town of Middlesborough, and she enjoyed the support. Did anyone else spot a naked man painted in pink!? Her song was Christina Aguilera’s Ain’t No Other Man. Whilst Amelia looked the part, unfortunately, her voice wasn’t good enough. She sang through her nose, which EFdoesn’t like. Louis told her: “Amelia, you are the comeback kid in The X Factor. I see something raw, and talent!” Tulisa said: “You haven’t been here for the whole competition, but you didn’t let that stop you. You are at the final. Well done.” Gary said: “Amazing performance tonight. Being the youngest one here tonight, I was worried. You did beautifully tonight.” Kelly was very proud of her girl.

The first guest performance of the weekend came next, in the form of JLS and One Direction. They sang a mix of their hits. Their fans must have loved this!

And next was the Judges duet. Marcus and the oh so lovely Gary Barlow was the first duet, and EF is sure women all around the country could not wait to see this one! Their duet was She’s A Woman To Me. Gary was sat playing the piano, whilst Marcus stood next to him. Gary was amazing, as always, but Marcus did have trouble with his harmonies. He should listen to the music more. Having said that, Marcus’ high notes were top notch! Gary said: “Honestly, Marcus has been incredible!”

Tulisa and Little Mix were next up, and their duet was a mix of Alicia Keys’ If I Ain’t Got You and Empire State Of Mind. It worked very well! The girls seemed to be enjoying themselves very much, and Tulisa managed to pull it off too!

Amelia’s duet was with her mentor Kelly Rowland. To duet with a member of Destiny’s Child must have been a daunting thought for anyone, so EF was very interested to see what they were going to sing. They sang River Deep Mountain High. This was the perfect opportunity for Amelia to once again, shout. Kelly was brilliant, much better than in previous performances. Amelia can hold a tune, but EF still thought she sang through her nose. Having said that, their duet was pretty good!

Next was previous X Factor winner Leona Lewis. It’s fair to say Leona is the most successful winner of them all, having gone on to crack America as well. She sang I Will Be and was by far, the best performance of the night. Talking to Dermot, she said: “ They must be feeling so nervous. I do get nervous too, it’s good to have a little bit of adrenaline.”

With the lines frozen, Tulisa said: “I’m so nervous. It’s out of our hands.” Kelly said: “All of the acts that performed tonight were amazing. They all sang so well!” Gary couldn’t call it.

The final guest performer was the gorgeous Michael Buble. EF loves a bit of the Buble. He sang Christmas (Baby Please Come Home), and made us feel very Christmassy.

Then, the voting froze and Dermot announced Amelia had finished third. She was very gracious in her farewell speech, and thanked everyone for voting for her.

It was a good final tonight, and all of the acts performed very well. EF still backs Little Mix to win The X Factor, and we will be tuning in tomorrow night for the result.