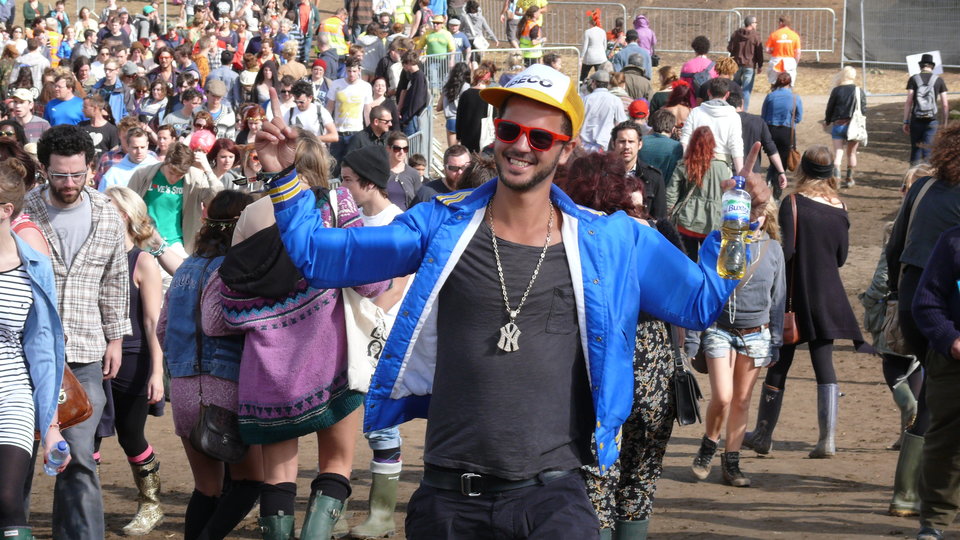 Happy campers what can we say about day two in the trenches at Bestival? It was muddy, wet and smelly. If you weren’t queuing by the pallearia then maybe you were still lying in your tent feeling sorry for yourself with a headache or better yet you were a trooper and ready for another delightful day of adventure and music at Bestival.

Saturday’s line-up made other festivals pale with envy! Fake Blood, Tom Vek, Chrystal Castles, Mercury Prize winner PJ Harvey and emo legends The Cure. Anyone thinking that mother nature would at all spoil the experience was thoroughly wrong nothing could have come and outshine people’s moods.

We started our day with a great workout courtesy of Mr Motivator! Then we caught a little bit o Clare Maguire’s. Katy B put a smile on our faces with her youthful looks and energy giving us enough motivation to carry on with our mammoth schedule. It has to be said that there were way too many bands, good bands we wanted to catch. We had to make does with the ones that we really didn’t want to miss.

OK it might have been before our time but even then who doesn’t want to dance along to YMCA? In The Navy? Yeah exactly everybody agreed that The Village People as camp and ridiculous as they might sound had to be seen. So along with the rest of the main’s stage crowd we danced and laughed and did the choreography and from that moment on the day just got brighter and brighter.

Still on the main stage we enjoyed Paloma Faith who dazzled us with her beautiful voice and outfit. New York andStone Cold Sober amongst other hits were on the bill.

On the Bit Top we caught Annie Mac’s present’s with Fake Blood particularly standing out of the bunch with his heavy, dirty bass keeping all the hardcore dancers happy.

Back on the main stage we caught up with second-time Mercury Prize winner PJ Harvey who captivated an entire crowd of fans or just passerby’s.

Most people came to see The Cure that evening and with a two and a half hour long set, fans weren’t disappointed. All the hits were played: Boys Don’t Cry, Friday I Am In Love, you name them! The Cure are one of those bands that wrote so many hits that two and a half hours just fly by listening to them.

We ended our evening with a stellar performance by Tom Vek the underdog of indie-pop. Can anyone who listened to Leisure Seizure call it anything but genius? Neither could the packed crowd at the Psychedelic Worm stage were Vek performed all his hits including Nothing But Green Lights, Apology, A Chore and finished off with Aroused.

Then it was time for some dancing…

In this article:Bestival, The Drums