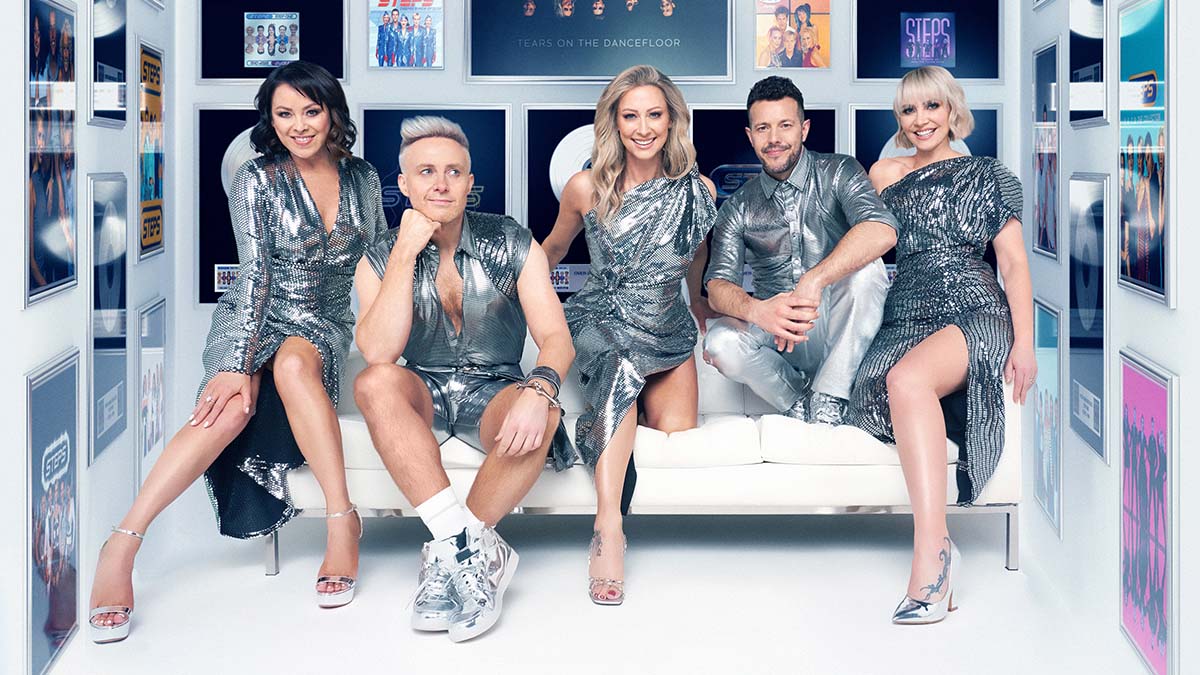 On Friday it was announced that UK pop band Steps – Claire Richards, Faye Tozer, Lisa Scott-Lee, Ian ‘H’ Watkins and Lee Latchford-Evans – had clinched the number one spot in the album charts with their latest release ‘The Platinum Collection’, fighting off strong competition from rising Mancunian rapper Aitch and the undisputable Queen of Pop Madonna.

The achievement means that Steps is the first mixed-gender British band to score a number one in four different decades – ‘Steptacular’ in the 90s, ‘Gold’ in the 00s, ‘The Ultimate Collection’ in the 10s and now ‘The Platinum Collection’ in the 20s. The feat is also a victory for physical media, a format that has long been predicted to be dying out, as ‘The Platinum Collection topped the physical sales chart (and it should also be noted it was the most digitally downloaded album of the week too).

Steps managed this incredible feat as they celebrate their 25th anniversary, something that the band themselves and their critics could never have predicted. After being formed, Steps were positioned as a line-dancing band with their debut single ‘5,6,7,8’ in 1997 and the future looked rocky at the outset. The song stalled at number 14 but it has gone on to become the band’s second biggest-selling single with sales of over 721,000.

During a time when pop band’s weren’t given just one chance to prove they could be a success, Steps steadily worked up to their first number one. Second single ‘Last Thing On My Mind’, a cover of Bananarama, landed at number 6 giving the quintet their first Top 10 single, and third single ‘One For Sorrow’ peaked at number 2 (whilst going on to be one of the band’s most enduring hits. Steps’ first number one arrived in 1998 with the double A-side ‘Tragedy’, a cover of the Bee Gees song, and original ballad ‘Heartbeat’. That release is the band’s biggest-selling single to date and has shifted more than 1.4 million copies in the UK alone.

Still, despite all their success, including debut album ‘Step One’ selling more than 1.4 million copies in the UK and 2.5 million worldwide, the critics were still eager to write Steps off as a one-hit wonder or a flash in the pan. Refusing to be written off, Steps scored their first number 1 album in 1999 with ‘Steptacular’, which went on to sell more than 1.2 million copies and spawned plenty more hits including the fan favourite ‘Deeper Shade of Blue’ and the unbelievably catchy ‘Love’s Got a Hold on My Heart’.

The band’s success continued with the release of third album ‘Buzz’ in 2000, which contained their second number one hit ‘Stomp’, and their first greatest hits collection ‘Gold’ in 2001. As is well documented, Steps disbanded on Boxing Day in 2001 when Claire and H decided to leave the band, later going on to form a short-lived duo, and fans were sceptical that they’d ever see the five together again.

Fast-forward to 2011 and Steps reformed for a Sky Living documentary, which saw them confront their break-up and decide to move forward. Second greatest hits collection ‘The Ultimate Collection’ followed, and after topping the charts a successful arena tour happened in 2012 and it looked like the band was back. New album ‘Light Up The World’ – largely a covers album – was released in 2012, but sadly the new album wasn’t well-received with fans not ready to embrace a more mature Steps. Once again it looked like Steps were over and it was five long years until the band returned with their fifth studio album ‘Tears on the Dancefloor’.

Kicking things off with ‘Scared of the Dark’, a song which has gone on to be considered a classic by Steps fans, Steps turned around that bump in the road in 2012. Against all odds, they’ve proven their critics wrong and the band is now a firm staple of the live music scene. Since ‘Scared of the Dark, the band has released two more studio albums – ‘What The Future Holds’ in 2020 and ‘What The Future Holds Part 2’ in 2021 – and perhaps most impressively mounted and almost completed a live arena tour in the middle of the pandemic.

This summer the band has been touring the country with their 25th Anniversary Summer Tour, drawing huge crowds at every performance. With three very well-received albums under their belt since 2017, it’s fitting that the band wanted to expand on their previous greatest hits releases with one that celebrates the entire 25 years of their career so far. The set also includes the single ‘Hard 2 Forget’ and a cover of The Three Degrees’ ‘The Runner’.

What’s been so fantastic about this success for Steps is that they’ve reminded us pop fans what real pop music and real pop artists are all about. They aren’t idly sitting there hoping that streaming will ensure their music reaches as wide a base as possible. In the week leading up to ‘The Platinum Collection’, the band embraced the 90s way of promoting an album by appearing all over the place and performing live. Fans in their hundreds snapped up tickets to Steps’ HMV in-store signings, with the band taking time to sign copies of ‘The Platinum Collection’ and interact with the people who’ve been on this journey with them for 25 years.

With the future looking brighter than ever for Steps, and the 25th anniversary of ‘Step One’ just around the corner, it’s an exciting time to be a fan of the band. Regardless of what you think of Steps, the band knows who they are they know what their fans want from them. They’re also willing to put in the hard work and go the extra mile to make sure they don’t disappoint. Whilst I was a big fan of Steps in the 90s, I’m an even bigger fan of the fab fivesome now. They’ve been together longer during this stage of their career than they were during the original phase, and they’re still making pop music that wipes the floor with the one-hit wonders that streaming ensures clog up the charts week-after-week.

In this article:Featured, Steps