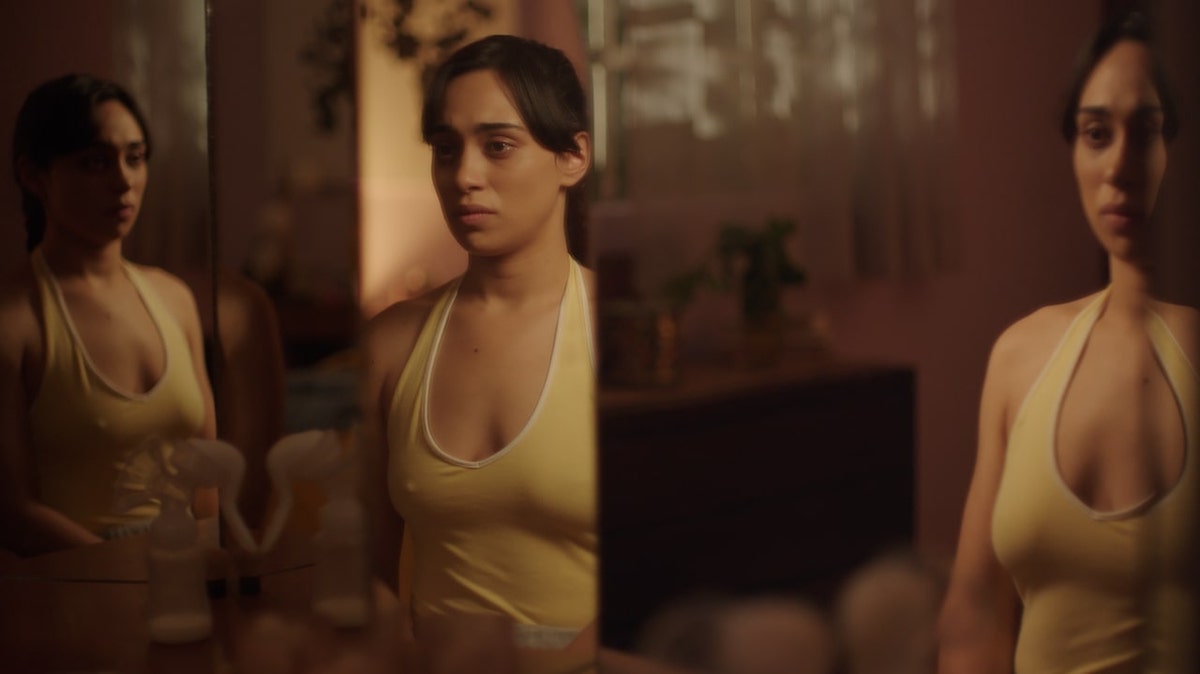 There’s not much new in the “motherhood horror” sub-genre, but when done right it can still provide an effective and grisly experience. In Michelle Garza Cervera’s feature debut, drawing on Mexican folklore and evoking the maternal anxieties of ‘Rosemary’s Baby’ and the body horror of early Cronenberg, ‘Huesera’ brings something fresh, fleshy, and decidedly feminist to the table.

The film follows Valeria (Natalia Solián) and her husband Raul (Alfonso Dosal) who are planning to start a family. Their desire to get pregnant sees Valeria going to the lengths of worshipping at the feet of a huge Virgin Mary statue in the film’s ominous opening scene. Valeria has given up her rebellious punk rock past and settled into the middle class hipster lifestyle, though not quite as comfortably as Raul.

When they finally become pregnant, her family, whilst outwardly happy for them, can’t help but make snide comments about her lack of maternal instinct. They take enormous pleasure reminding her of a catastrophic babysitting incident when she was younger.

All of this feeds into the dread and anxiety that she is already feeling towards pregnancy and motherhood. She sneaks the odd cigarette to calm her nerves, and begins cracking her knuckles. At this point a word of congratulations must go out to the entire sound department on this film. If you’re in any way grossed out by the sound of knuckles cracking—or other bones for that matter—you will leave this film with PTSD.

One night when Valeria can’t sleep she stands at the window getting some fresh air when she witnesses what appears to be the suicide of one of her neighbours. The woman throws herself from her window, her legs smashing on the concrete. Her head split open. Then when the corpse lifts her head and stares at Valeria, her nightmare truly begins.

True to generic conventions, no one believes that she saw what she saw. Her husband, her family, and the doctor all think she imagined it. Only her aunt takes her seriously. As the pregnancy progresses, the sense of something haunting her, changing her, controlling her from within only gets stronger. Her behaviour becomes more irrational. Her doctor tells her that the only thing wrong with her is she’s pregnant.

Anyone with even a passing interest in the horror genre will likely feel a sense of familiarity with ‘Huesera’. Certainly from a thematic perspective, we’ve seen the horror fable of motherhood many times before. But there’s a real confidence in the filmmaking, and some striking imagery that make this more than worth your while. Some of this imagery is extremely disturbing, and whilst never relying on jump scares, Garza Cervera certainly knows how to make your blood run cold.

Built on a superb central performance from Natalia Solián, both physically and emotionally, ‘Huesera’ is a haunting evocation of the horrors of motherhood, and a gruesome reminder that parenthood isn’t for everyone.