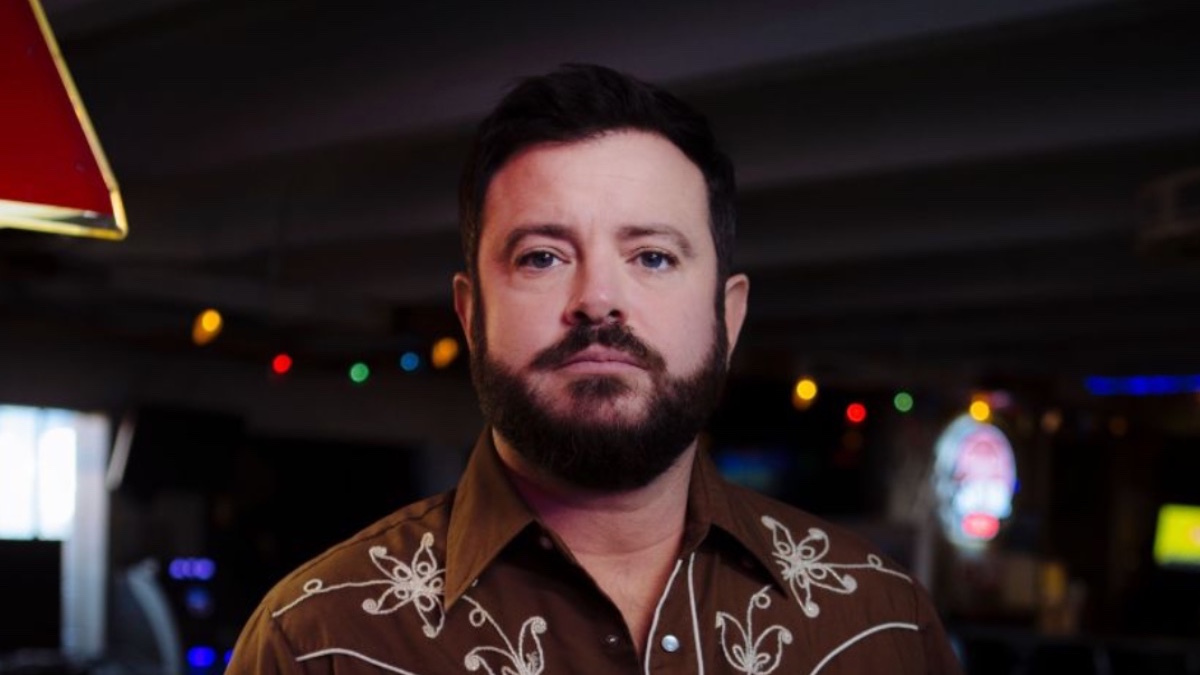 For more than 20 years, singer-songwriter Wade Bowen has nurtured a deep and abiding love affair with country music. But like any relationship, the passion behind it has ebbed and flowed.

A proud member of the Texan troubadour tradition, Bowen’s independent streak has taken him far beyond his home state’s creative borders, bringing both artistic respect and the cold-hard currency of national success along with it. Six studio albums filled with unmistakable vocals, self-penned prairie-land poetry and a roadhouse rocker’s edge led to dozens of Texas radio hits but on new album, ‘Somewhere Between the Secret and the Truth’ Bowen has collaborated with Country writers like Lori McKenna, Eric Paslay, Heather Morgan and Ray Fulcher. The results are phenomenal, as you will be able to hear after the album is released on August 12th.

We caught up with Wade to talk all about it.

Thank you for giving us your time today Wade, it’s lovely to speak to you.You sound like an artist re-energised to me on ‘Somewhere Between the Secret and the Truth’

Thank you for your time and thanks for the kind comment too. For sure I am re-energised. I have more focus and more direction right now that at any point in my career and I’ve been doing this for a long time!

You produced the album, for the first time in your career. What was your motivation behind wanting to take up that role this time?

You know, my management team kinda pushed me out of my comfort zone to do it! I knew what I wanted out of each song and out of the record overall so I decided to give it a try and if I fell on my face, well, I would have started all over again!

I really enjoyed being able to make the decisions and being at the reins of the whole project. Sometimes when we get out of our comfort zone, we find hidden strengths that we never knew we had.

Could you see yourself producing albums for other artists now, going forward?

Yeah, maybe. It would be something I would consider. I don’t know if I could do it for everyone but I think there are some artists I would really enjoy doing that job for. My buddy, Randy Rogers, and I are going to produce our next ‘Hold My Beer’ record together so I would consider producing for other artists in the future.

I know you suffered from writer’s block just before the making of this album. Was that pandemic related or more about being at a stage in your career where you thought you’d said everything you wanted to say?

I think it was more Covid related than anything. I think I was a little shell-shocked when the pandemic started and I kinda went into panic mode and didn’t quite know how to handle all the emotions and thoughts that came along with that period and all that we were going through.

When I started writing again it just kinda slowly came back and I fell into a really good groove again. The last year and a half or so, I feel like I have been writing the best songs of my life.

‘Somewhere Between……’ feels like you’ve veered a little more towards Country storytelling and characters than some of your previous projects. ‘Burning Both Ends of a Bar’ could be a Garth Brooks song to me.

That was something I really wanted to do. The music that I love the most, that I listen to at home, is pretty much 80s and 90s Country. I’d kinda gotten away from that in my career, you know. I’d fallen in love with Springsteen, right? I mean, I named my son Bruce for crying out loud! (laughing)

With this record I decided to dive back into the sounds and the music that I love to listen to. I wanted to mesh the sounds of 80s and 90s Country with my own established sound. Country writing is really clever because it is based on a lot of the same themes but everyone finds a way to make it personal to themselves. Take ‘Secret to This Town’, I mean, how many ‘small town’ songs are there out there? Right? You’ve gotta find a way to make it unique to yourself and I think we managed that on this record.

You are spot on! There are thousands of ‘small town’ songs but ‘Secret to This Town’ sounds fresh and vibrant and explores a different angle.

There are a lot of different influences on that song. Lyrically, there’s some Springsteen stuff in there but it’s rooted in Country music. As writers we’re not re-inventing the wheel here, right? We’re just writing songs from our own perspective. Everything has been said in the music industry, lyrically, it just hasn’t all been said by me yet! (laughing)

Heartbreak songs and sitting at the bar drinking and thinking about the one you lost – those themes are never going to go away – they are always going to be part of Country music, you just have to find your own way of saying it.

Did you make a conscious decision, then, to seek out Country writers like Lori McKenna, Eric Paslay, Heather Morgan and Ray Fulcher?

Oh yeah. I’d never made a project before with those people despite them being friends of mine. Ray is a new friend and all the others were existing friends but I dove into them as writers this time around.

With Lori, she and I had been friends a long time. When Covid happened she stayed in Boston so thank god for Zoom calls, right? (Laughing) I was in Texas, she was in Boston but all of a sudden we could write together and the best thing that came out of the pandemic was my friendship with Lori!

You guys must have just hit it off because she has three songs with you on this album and they are all killer songs!

Lori has always been one of my favourite writers and we just really hit a groove. She’s such a wonderful person to be around and with Zoom we got to also talk about our kids, lives, you know, not just be writing all the time. We write really well together – there’s some songs we wrote that didn’t feature on this record that might be on the next one! Same with Heather Morgan – she’s a Texas girl but we’d never written together before. She’s such a secret weapon! She quietly goes about her writing business and just crushes it every time.

How did you manage to get Vince Gill to guest on ‘A Guitar, a Singer and a Song’? What a beautiful song that is.

Vince agreed to sing harmonies on the song at first and then I suggested that I felt like the whole song was inspired by him. He’s the best of the best and so I said that if he felt inspired to play a solo or even sing a verse I’d be honoured and he agreed to do it! Sometimes all you’ve got to do is just ask I guess! (laughing)

Vince has always been such a sweet, gracious and kind person when I have met him before and this was no different. People say that you shouldn’t meet your heroes but in Vince’s case, you should – sometimes they exceed all your expectations.

That song needs to be performed by the two of you at The Opry!

I agree! (laughing) I hope that happens and I’m going to do all that I can to try and make that happen.

There’s a couple of honky tonk songs on the album! ‘Honky Tonk Roll’ and ‘She’s Driving Me Crazy’ are going to be such fun to play live!

You’ve gotta have some roadhouse, honky tonk songs on an album like this one! I’ve spent the majority of my career playing the bars. I love having them on the record so that I can go play them live. Those type of songs are the kind that you know the crowds are going to love and we’re going to really enjoy playing them.

I can’t wait to take this album out on the road, there’s such an energy to it.

Every time I listen to the album, a different song stands out, which, to me, is always a sign of a great project.

Thank you. I really tried hard on this album to make it flow. I really focused on every single song being top notch and having something to say. I wanted nothing but the best and I do feel like I’m writing the best songs of my career right now.

There are two songs I’m worried that will go under the radar because of the Lori McKenna, Vince Gill headlines. The first is ‘If You Don’t Miss Me’, which you wrote with Ray Fulcher. What a great angle to come at a break up from.

Ray and I had both been working really hard and I flew into Nashville and met up with him late that night. It was the first time we’d ever met! I went out to Ray’s house I can hardly remember even writing it because I was so tired! A few days later I was listening back to what we’d written and was like, ‘Wow! This is actually really good!’ I was so proud of what we wrote together.

The second track is ‘It’s Gonna Hurt’, which is just sublime.

Oh yeah! Thank you very much. Someone said that line in passing to me, ‘it’s gonna hurt, till it don’t’ and I was like, ‘I’m gonna write a song about that, right?’ (laughing) Drew Kennedy is a fantastic songwriter and he lives about two minutes away from me! We write a lot of songs together but this one was not one of the ones we typically write, it’s stone cold Country.

If Keith Whitley were alive I would probably try and pitch ‘It’s Gonna Hurt’ to him. That’s exactly the sound we were going for on that song.

How do you get Nashville to sit up and take notice of this album, or don’t you worry about that?

Oh man. I don’t really concern myself with that. If it’s good enough it will get attention but attracting Nashville’s gaze is not really on my radar. I do the best I can to write the best songs I can. I play 150 shows a year and work as hard as I can and then everything else is out of my control.

Hopefully people will pay attention to this record but I want my fans to love this project and hopefully pull in a few more fans along the way and then I can continue to make a good living doing the thing I love to do the most. As long as this record allows me to keep doing that, it will have been a success.

We hope we get to see you over in the UK on this phase of your career playing ‘Somewhere Between the Secret and the Truth’ as well.

I promise that will happen! I absolutely love playing over there in the UK and Europe. I’ve been over a few times now and every time I come back singing the praises of you guys. The way you listen to music there and appreciate songwriting is hard to explain to people who haven’t seen it. I cannot wait to come back, hopefully sooner rather than later.

‘Somewhere Between the Secret and the Truth’ is out on all platforms on Friday August 12th.

In this article:Featured, Wade Bowen