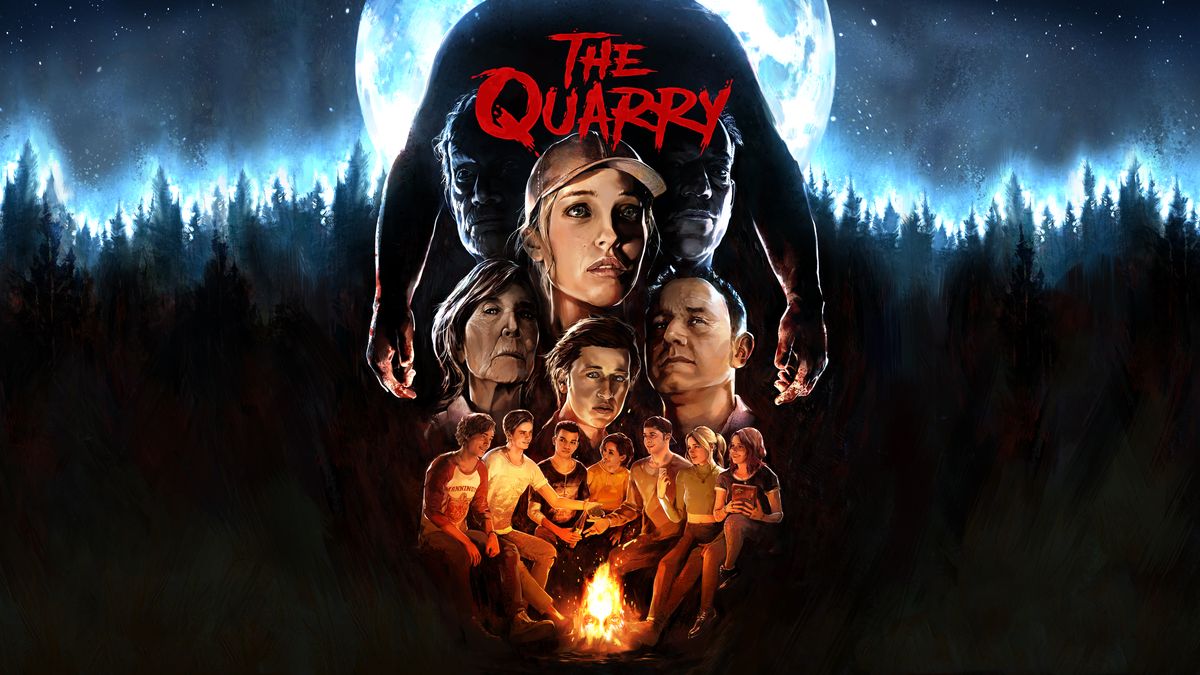 As someone who grew up on survival horror games and loves narrative driven games, (which is definitely not code for “I’m bad at games”), Until Dawn was the perfect mix for me. The added dose of teen slasher just sweetened the deal. Developer Supermassive Games returned to the genre with The Dark Pictures Anthology, a group of unrelated one-shot horror games. As a whole, they’re decent games but the formula is starting to wane. Out of nowhere, however, Supermassive announced The Quarry, a full-length game akin to Until Dawn. Hopefully The Quarry manages to freshen up the expected game design because I see myself, and the majority of the player-base, tapping out pretty soon.

Without spoiling the opening, after a prologue sequence you find yourself in the lives of nine summer camp counsellors at the end of their stay. The kids have gone and the group is ready to say their goodbyes. Friendships and romances have formed and the potential to not see any of their friends again, causes one member of the group to secretly sabotage their getaway vehicle in the hopes of one final night, a night to remember. The camp owner, Chris Hackett, urges the group to leave and when he realises this won’t be happening tonight, he begs the group to stay locked in the lodge for the night, and leaves with a fearful look on his face.

Ignoring the actual opening of the game, the opening that introduces the main cast is great, it dumps you in a group where you’re unsure of the dynamics and gives you a surprisingly long time to get to know these people. Of course, things don’t stay nice forever and threats both human and… not, make their way towards the group. Saying much about anything would spoil the game which makes this tough to talk about.

Narratively, the game builds intrigue very well and its attention to its characters is excellent. This extends to the writing, however there are a couple of issues. Firstly, is the fact that these characters constantly do things that no human being would ever do. Picture this, a monster is outside the shed aware of your presence. Your friend is constructing a device capable of saving you. You offer to cover him. Do you A:) Draw your gun and charge away from your friend screaming at the monster? Or B:) draw your gun and quietly stay by your friend and keep watch? The games forces the first scenario on you and the game is loaded with these moments, particularly in the middle of the game.

The second issue concerns tone. Until Dawn, specifically, had dollops of dark humour and campy antics, but generally stayed levelheaded. Picture this scene, the group witness a member be horrifically ripped apart in front of them and they are covered in the blood of their friend, less than an hour later, in the same room, they’re cracking jokes and talking about relationships. It’s kind of dumb and not in the self-aware way Until Dawn tackled it. I’m a forgiving guy, so I’ll let it slide but some people may find it very jarring. I was unsure of how much I was liking the story for the first half, but things do pick up quite rapidly and the cast themselves are simple and stick to the tropes they’re assigned and this is perfectly fine for a game like this.

On a gameplay front, things are easier to talk about. Like any game of its ilk, The Quarry is a third person adventure game with decisions and QTE’s. You’ll explore some small areas and sometimes have a couple of paths to choose. There’s all manner of collectibles here and picking up a few may link those together through a clue system. This allows the player to keep up with the twists and turns in the story which is handy. While the previous Supermassive games had collectibles that gave you short vignettes of future scenes, The Quarry has tarot cards that hint at future events, but I miss the short clips that really built interest.

As far as decisions go, they’ve provided quite a healthy amount throughout the adventure, but it seems that dialogue choices have been stripped back. There are long sequences of dialogue without any input, which make repeat playthroughs quite frustrating. QTE’s are the most baffling, Supermassive wished this title to be more accessible and in doing so, all QTE prompts are done with the directional stick and are remarkably easy. There’s a mechanic where you hold your breath and let go at a certain time to avoid danger and it can be a little difficult to know when it’s safe. It helps with tension but can be a little irritating. Despite the game being accessible, I lost a lot of characters in my first run, more-so than any title before it. Supermassive have struck a good balance and danger is always one choice away.

Supermassive Games know how to make stunning titles and The Quarry is no exception. The character models are incredibly life-like, to the point it can be hard to discern if they’re real or not. Environments are great too, though the game is far too dark at times – sure it’s realistic but this makes it hard to traverse. There’s also a ton of small visual hiccups, they got better with a patch but there’s still a couple of minor flutters. The voice cast are all excellent, there’s big names here but they stay grounded and don’t overshadow their scenes. The soundtrack is solid enough, though not memorable.

The Quarry came out of nowhere and I’m a sucker for this genre. The slow build up is a little risky because the game does drag and a lot of people may be tempted to quit. The game managed to flip and grab my attention as soon as it hit the fan but long builds ups can cause player dissociation. The choice to make the game more accessible is worrying (not talking about disability accessibility, though that is here too) but a great balance is struck. Once you finish the game, you are given the choice to reverse 3 deaths per playthrough, as well as a couple of other modes, including a movie mode where you set character personalities and let the story play out. The Quarry is a solid title and most people know what they’re getting here. It doesn’t reset the gameplay formula but it’s a game worth playing, though the full price tag is something worth considering.

The Quarry was reviewed using a PS5 retail copy purchased by the reviewer.