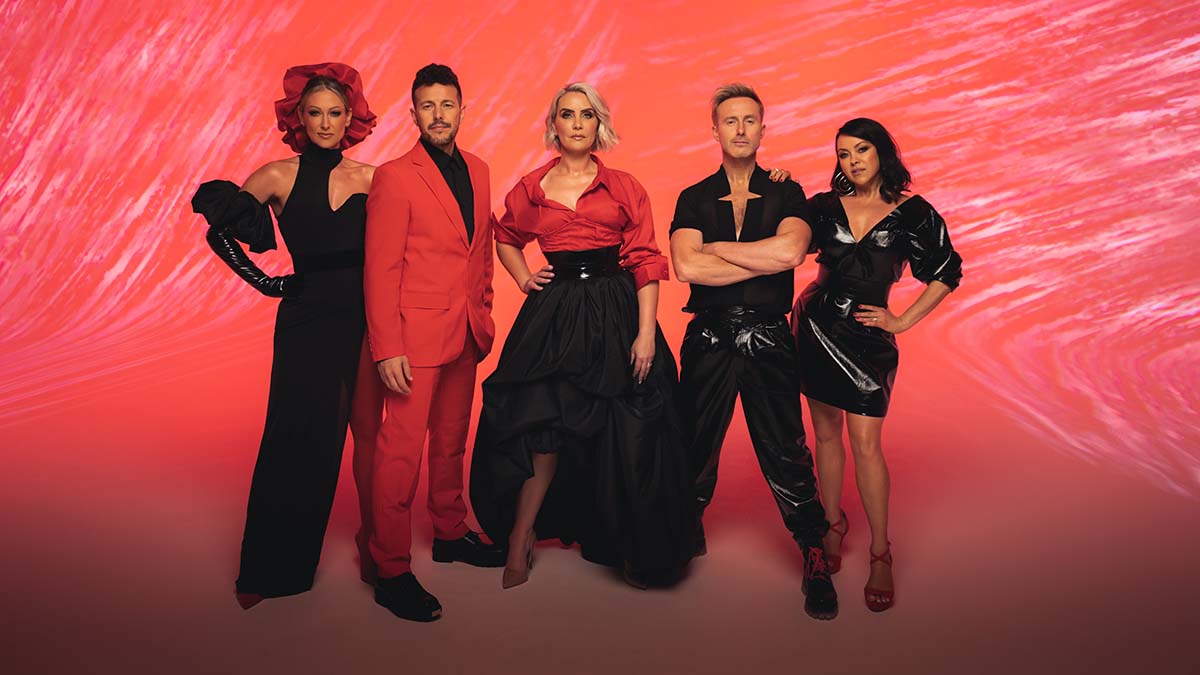 This year marks the 25th anniversary of one of the biggest pop bands of the late 90s and early 00s – Steps! The band have been polishing up their old videos into HD and have a summer tour planned to celebrate the anniversary.

Steps first burst on to the music scene with their line dancing, techno-lite track ‘5,6,7,8’. That was all the way back in November 1997 and many wrote them off as a one-hit, novelty wonder. That didn’t prove to be the case as their moved sonically to sound like a modern day ABBA, racking up a very impressive 16 UK Top 40 hit singles (many of which were double a-sides so you could argue that’s actually 21 songs).

Their first phase, step one shall we say, saw them release three studio albums and a greatest hits before they disbanded in 2001. It wasn’t until 2011 when they would bother the charts again, when a new greatest hits collection, ‘The Ultimate Collection’, topped the charts following a documentary that had reunited the five band members and given them all a chance to air their grievances.

Buoyed by the success of the documentary and new hits collection, Steps reformed and released a Christmas album ‘Light Up The World’ in late 2012. Unfortunately, the new more mature sound wasn’t what the fans wanted and it peaked at No.32 and Steps went their separate ways once more. That was until Spring of 2017 when they came back with a bang with ‘Scared of the Dark’ from their album ‘Tears on the Dancefloor’. This track was everything a Steps fan wanted combining what was great about them in their first phase with modern production.

Since then, the band have put on various tours and released another two studio albums.

Everyone knows their solid arsenal of pop bangers and tear jerkers, but today EF is diving deep into their discography of seven studio albums and countless b-sides and bonus tracks to pick their ultimate 25 Best Non Single Tracks.

Let’s look at the 25 tracks that EF thinks are their top bops outside of the single releases:

Kicking off our countdown is US bonus track from the ‘Buzz’ album. This mid-tempo track is all about being opposites and falling in and out of love. It definitely has a whiff of Atomic Kitten’s ‘Whole Again’ about it.

From most recent album ‘What The Future Holds Pt2’, this track has some balleric influences coupled with modern pop-dance production….and the infectious ‘i i i i i i’s!

23. History Is Made At Night

Steps’ Christmas album ‘Light Up The World’ wasn’t exactly the album that the fans wanted, but this track was one of the standouts. Composed for the TV show Smash and is a swing-lite throwback which would be perfect in a 1950s love story film.

Aye yai yai! Steps get scorchio on flamenco-tinged banger from ‘What The Future Holds’. The track was written by Fiona Bevan and Carl Ryden who also penned the previous singles ‘Neon Blue’ and ‘Scared of the Dark’.

H takes lead vocals on this album track from ‘Steptacular’ all about falling for his bestie’s girl. With a bassline reminscient of The Tamperer’s ‘Feel It’ (which in turn took it’s bassline from Jackson 5’s ‘Can You Feel It’) it’s an upbeat track about forbidden love – naughty H!

A sweet ballad that would be perfect for a West End Show or an early X Factor winner’s single, Faye showcases her vocals as she sings the lead throughout the song. She co-wrote it with Cyndi Lauper (amongst others) and the track appeared on Steps’ third album ‘Buzz’.

A electro-80s banger, ‘To The One’ is an album track from Steps most recent studio album ‘What The Future Holds Pt 2’. This track was co-written by Hannah Robinson (with Jewels & Stone) who is also responsible for tracks from Dannii Minogue, Rachel Stevens, The Saturdays and more.

One of four bonus tracks on Steps’ first hits collection ‘Gold’, this track was very nearly a single but was pulled when the band split up. It’s got that disco meets Motown vibe that worked so well on similar songs like ‘Stomp’.

Lisa told us around the release of ‘What The Future Holds Pt 2’ that this was her favourite on the album and we agree it’s one of the album highlights! It’s actually a cover of a 2017 Swedish hit by Mariette and was entered into MelodiFestivalen; Sweden’s selection process for Eurovision.

Starting quite gently with H on vocals, this song builds to an uplifting chorus with all members of the group blending beautifully. The second verse is taken on nicely by Lee and the overall effect is something a little different from Steps that is still comfortably familiar.

Steps take on the Randy Newman penned song, written especially for ‘Toy Story 2’ is incredibly beautiful. All the girls get to show off a softer side to their voices as well as their higher range in this sweet-but-sad number from ‘Light Up The World’.

From the album ‘Buzz’, this track has that Ace of Base sound and deals with those holiday romance blues when you’re no longer with your beau. Anyone else fancy a piña colada now?

This is a straight out hi-energy number from the brilliant ‘Steptacular’ album, released back in 1999. That middle 8 is everything!

One of the most dancey tracks on ‘Tears on the Dancefloor’, this track is a spacey banger that will have you shooting to the stars! Could’ve been a great single, but then again it is an album filled with single choices.

Steps were clearly influenced by that Max Martin sound with the title track from their third studio album; could easily have been a track by N*Sync or Britney Spears. But of course, they added their own slant, and Lee takes us right back to ‘5,6,7,8’ showing off his rap skills.

An upbeat early album track from the group’s second album, ‘Never Say Never Again’ has very ABBA style verses leading to an upbeat chorus. Written by Andrew Frampton and Pete Waterman it is very much Steps at their early Noughties best.

9. Never Get Over You

Lisa takes lead vocals on this bop from ‘Buzz’. She was also responsible for writing this infectious little number alongside Ray Hedges and Nigel Butler. Performing it on the Steptacular Tour, Lisa goes from possible bride to shagadelic Austin Power’s style sidekick.

Claire kicks things off on this atmospheric thriller talking about a failed relationship and the good old days when we were happy. An edgy, melancholy banger that takes the Steps sound both sonically and lyrically into a more mature territory.

7. You’re Everything That Matters To Me

From ‘Steptacular’, this heartfelt ballad is delicate, and emotionally charged. It starts as an end-of-the-night, piano-jazz-bar number. Claire and Faye sound perfect together as their voices mingle throughout the verses.

6. You Make Me Whole

The group brought their sound bang up to date with this track from 2017’s ‘Tears on the Dancefloor’ album. It’s the perfect blend of everything we love about Steps (the dance-pop, the harmonies, hooks galore) with production that made it feel nostalgic yet on trend at the same time.

A mid-tempo track from ‘What the Future Holds’, the repetition of ‘in the clouds’ in the chorus is definitely an earworm. Interestingly one of the tracks writers is Jez Ashurst from a little know indie band called Farrah. However, he’s no stranger to writing pop tracks having penned songs for Duncan James, Will Young and Little Mix.

Bringing it right up to date with a track from last year’s ‘What The Future Holds Pt 2’ album, ‘Living in a Lie’ is another track that feels like modern day ABBA and is the perfect sister track to single ‘Something in Your Eyes’ – not surprising when they were both written by the same Swedish writers!

3. Since You Took Your Love Away

Our top mid-tempo-ballad choice comes from ‘Steptacular’ and is the dramatic ‘Since You Took Your Love Away’. Faye is on fine vocal form as she takes lead responsibilities for the entire song (H joins in for part of the chorus). Remember on The Next Step tour where she came out with a tin foil cloak with a massive stiff collar that Ming the Merciless would be jealous of?

An album track from their debut album, ‘Step One’, this track is a cover of Sunscreem’s 1992 club smash. Where the original is more indie-electro in sound (with very minimal instrumentation for the first half), Steps is a full on uplifting bop which utilises the catchy musical hook from the get go. I challenge anyone not to dance when this track comes on!

1. No More Tears On The Dancefloor

The title track to Steps 2017 comeback album is a joyous, uplifting smash. Written by Carl Falk and Darren Hayes, the girls from Steps mixed it up with a disco classic on their ‘Party on the Dancefloor’ Tour when they started acapella with the intro from Donna Summer and Barbra Streisand’s anthem ‘Enough is Enough’. Pure genius!

Which tracks have we missed? Tell us @entfocusmusic. Listen to the full 25 song list on Spotify.

In this article:Featured, Steps