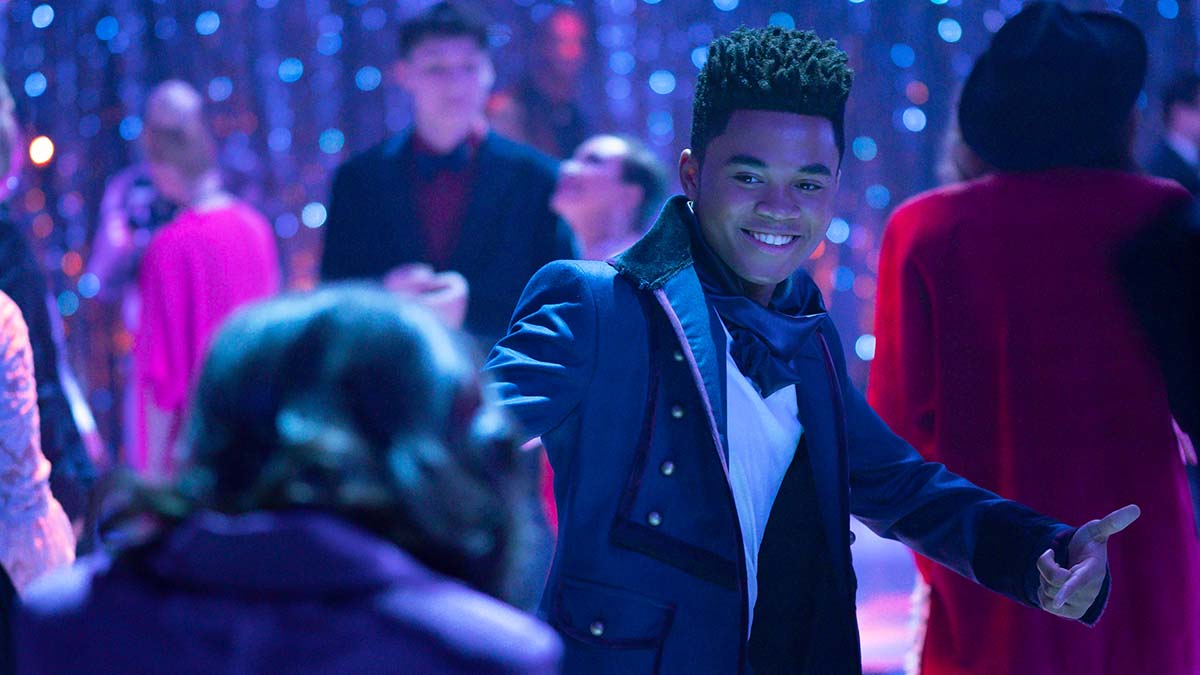 El (Chosen Jacobs), an aspiring sneaker designer from Queens, meets a beautiful fellow sneaker enthusiast when he tries to get his hands on some sought-after sneakers with his friend Sami (Devyn Nekoda). After spending the day together, El is shocked to learn that his new friend is Kira King, the daughter of a basketball star and sneaker tycoon, and when an opportunity to showcase his talents comes up, El is torn between pursuing his dreams and being honest about with Kira.

‘Sneakerella’ is a Disney+ original movie that gives a modern twist to the classic ‘Cinderella’ story. Rather than the story focusing on a young girl treated poorly by her step-mother and step-sisters, this take puts El in the Cinderella role. He runs a sneaker shop with his step-father and his two-step brothers in Queens, and dreams of making it big with his creative and forward-thinking sneaker designs. His dreams are hampered by the attitude of his family and the threat of the store closing down the family moving to Jersey hangs over him.

El’s chance meeting with Kira changes his outlook and with the support of his friend Sami, he begins to believe that maybe he can chase his dreams and achieve them. The film impressively follows the main beats of the ‘Cinderella’ story while offering something fresh and new. Like ‘Cinderella’, El presents himself a something he’s not with the help of his Fairy Godfather (Juan Chioran), and his decisions to defy his family and lie to Kira are clearly going to cause him plenty of trouble.

‘Sneakerella’, as you would expect from a Disney film, is packed with upbeat and catchy songs that draw inspiration from R&B, hip-hop and pop. The film opens with a performance and dance sequence that will bring to mind classics from the studio such as the ‘High School Musical’ franchise. Even in the moments that the film feels familiar, the music keeps you invested and the soundtrack is sure to be streamed to death over the summer months.

The film benefits from having two charismatic leads too. Chosen Jacobs is suitably adorable as El and you can’t help but root for him to succeed. He’s the underdog, as Cinderella was, but he gets the audience on side as he tries to navigate his difficult family situation and his hopes and dreams. He’s matched by the fantastic Lexi Underwood as Kira, and she turns in a sweet and sensitive performance, as well as showcasing her impressive vocal chops. Devyn Nekoda is worthy of a mention too as the delightful Sami, who steals plenty of scenes with her comedic timing.

‘Sneakerella’ may be based on very familiar material and it may even have a few nods to ‘Romeo & Juliet’ but this fresh adaptation is worthy of your time. I’ve never seen this spin on the classic ‘Cinderella’ story before and the vibrant young cast will win you over with ease. ‘Sneakerella’ mixes a well-known story with some fresh ideas, and visually it’s very pleasing too. Younger viewers will lap it up and adults will find it hard not to be won over by its charm too.