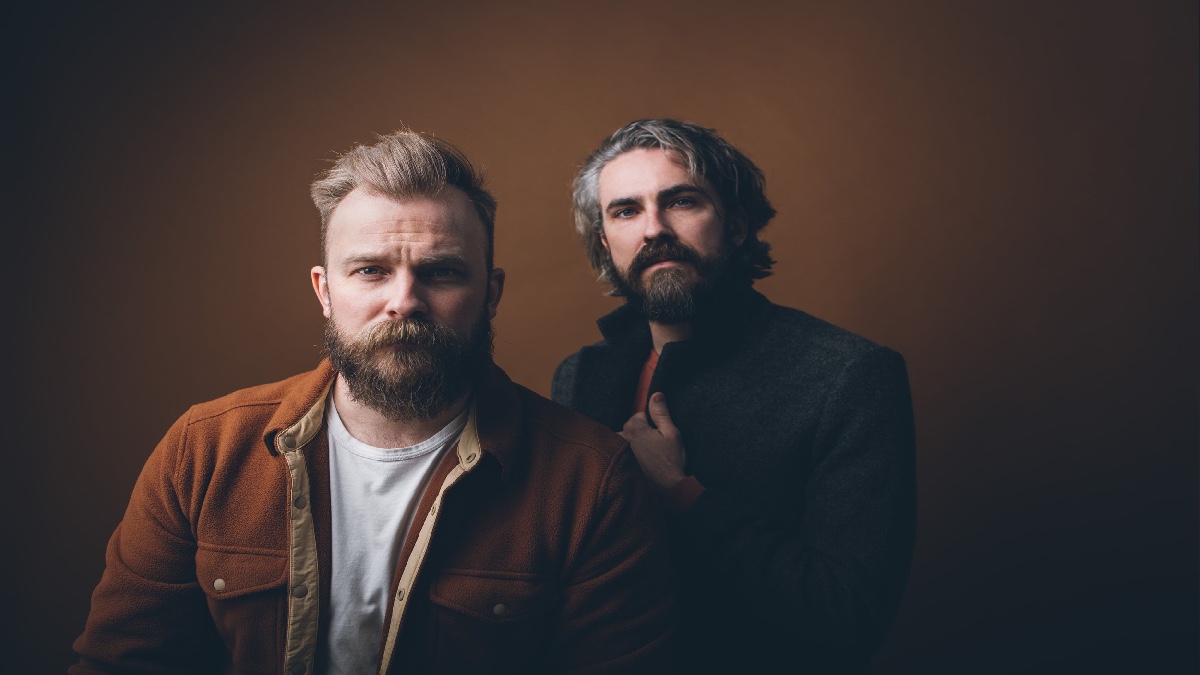 The Bros. Landreth, the Canadian duo made up of the eponymous sibling duo of Dave and Joey Landreth, made a critical splash with their first album, ‘Let It Lie’. It won them Juno awards in their home country of Canada, and they continued their success with the follow-up album, ‘87′. That album came out in 2019, and after touring behind for a few months, their activities were shut down, just like everyone else, by the Covid pandemic in early 2020. For the next 2 years, the brothers returned to their homes Winnipeg, Manitoba, Canada, becoming fathers and enjoying a long break from the road.

After this forced hiatus, the duo returns with an excellent new album ‘Come Morning’ which reflects on the changes in their lives, and how that affects their careers as musicians. The album kicks off with “Stay,” in which they express the conflicting emotions they face as they ponder a return to the road and touring life. When I talked to them, they emphasized how much they love playing, while equally emphasizing how much they love their families and being fathers. These things, as the song explores, are in tension, and the song doesn’t attempt to put a neat resolution on that.

The second track on the album, ‘What In The World’ leans in the direction of a slightly twangy Americana with pedal steel. It’s the love song of someone in a dedicated relationship, someone who has found their companion and partner, who has come to rely on that person to support them, emotionally and otherwise. I once heard Rosanne Cash describe one of her songs as a “mature” love song, and that description applies well here.

The themes of love of commitment as the album winds on through ‘Drive All Night’ which explores the history of a relationship. Nostalgia gets a bad rap, but memory is a potent thing, and, as I approach middle age, I find the memories of my younger days often elicit strong emotions. This song is all about reclaiming and holding on to those echoes of days gone by. The writing is very concrete, creating strong scenes, making it very easy to connect as a listener to what’s going on here. If you don’t have similar experiences on your own to hang this onto, the song will do the work for you.

The other side of memory is, as the Landreths explore, ‘Shame’ and regret. The guitar work on this album is excellent; from the first note of this song, you feel the change in the emotional timbre. There’s a real trick to maintaining consistency of sound while varying the mood enough to make the songs dynamic, interesting, and well-suited to what’s going in the lyrics. The Landreths, in addition to being skilled songwriters, are strong composers and performers, and this album is really strong across the board. It’s not hard to see why distinguished artists like Bonnie Raitt have become fans and recorded their sons (she recorded their ‘Made Up Mind’ on her latest album, the recently ‘Just Like That…’).

The Landreths were careful to say the songs here, while influenced by their lives, are not autobiographical, and that’s clear with ‘You Don’t Know Me.’ This is a song about a relationship coming apart, where two partners are losing touch with each other. It speaks to the loss of familiarity with a series of statements that exaggerate the reality of a breakup so that, while it’s not strictly a piece of realism, it is a very realistic depiction of what a breakup looks like.

A lot of Canadian artists don’t get the recognition they deserve in the States; this is unfortunate but true. ‘Come Morning’ is a fantastic album with elements of roots rock, Americana, and singer/songwriter genres in it, and, if you enjoy any of those, you need to check it out.

In this article:The Bros Landreth