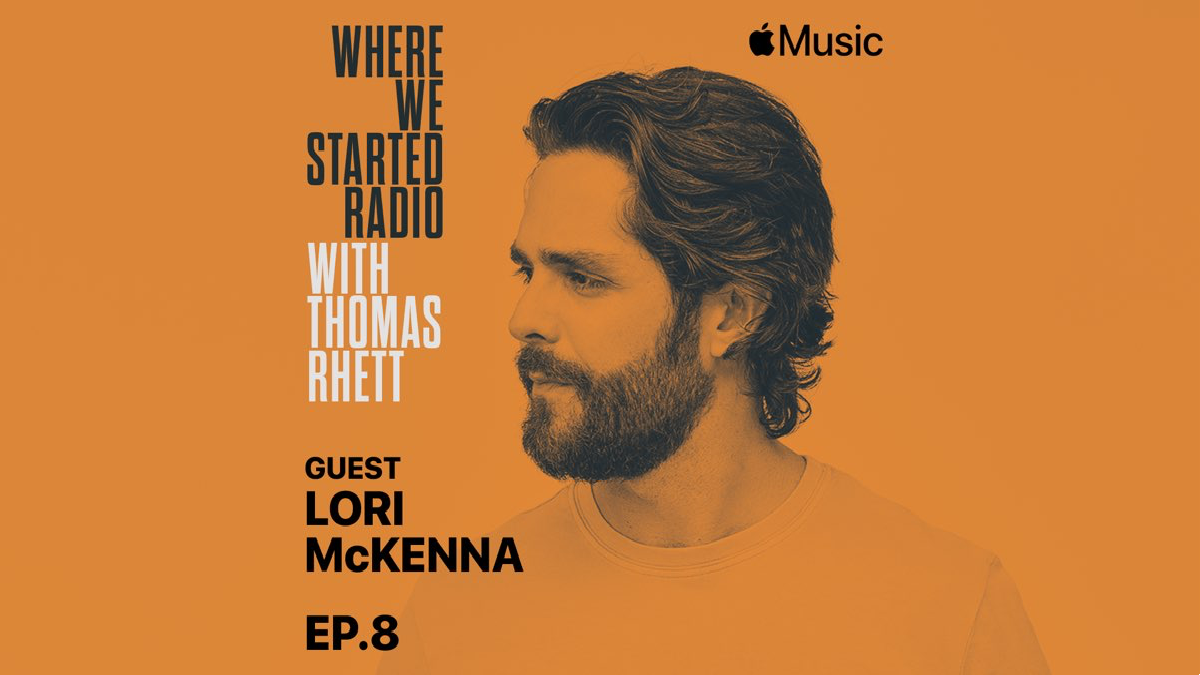 Lori McKenna joins Thomas Rhett on Where We Started Radio. Lori shares the story behind one of her first co-writing sessions, what it was like working with hitmakers Taylor Swift and Lady Gaga, and the story behind “The Hill.”

Tune in and listen to the episode anytime on-demand with an Apple Music subscription at apple.co/_ThomasRhettRadio

Lori McKenna on one of her first co-writing sessions
LORI MCKENNA: I have such a unique story, because I had been to Nashville one time in my whole life. I put out this record up here in the Northeast called ‘Bittertown,’ and Mary Gauthier who’s a dear friend of mine, brilliant songwriter, gave it to a publisher named Melanie Howard, who gave it to Missi Gallimore, who gave it to Faith Hill. So I had four Faith Hill cuts before I ever co-wrote a song. I know it’s crazy. I’m the luckiest person in the whole world. So when I came to Nashville, they said, “You should co-write songs.” I didn’t know how to do it, and people were like, “That’s going to really mess you up.” At this point, I was 36 years old. I had never co-written a song, and they’re like, “I don’t know. This is probably not a good idea.” But my publisher, who was Melanie Howard, was my first publisher. She’s like, “No, this is what we do here. This is what we do in this town.” My first co-write was Mark D. Sanders. Can you imagine? “I Hope You Dance,” and a million other incredible songs.
THOMAS RHETT: Right. Exactly. No pressure.
LORI MCKENNA: But he was so nice to me, and he knew I had never co-written a song. He knew that I was in this remarkable place where I already had a deal, and I already had some cuts coming up with Faith. He was just really, really nice to me. So Melanie Howard was married to Harlan Howard. She’s Harlan’s widow, and so every time when I was in Nashville, I would stay at her house. So I had never met Harlan. He passed away before I got there, but I knew I was in this historic energy was just bouncing around the rooms, and there was guitars and everywhere that he had played and written songs on.

Lori McKenna on Taylor Swift, “I Bet You Think About Me”LORI MCKENNA: She [Taylor Swift] came up to play Gillette Stadium and a couple days before she gets here, I’m eating dinner with the kids and I get a FaceTime from a number I didn’t know. This is back 10-something years ago. And I answer it because we were like, “Who’s FaceTiming me?” And it’s Taylor like, “Hey, I’m coming to town. Would you have some time?” We’re mutual friends with Liz [Rose] and I think maybe I had met her once or twice. And, “Would you have any time to write with me before the show? And then do you want to bring the kids to the show?” And I’m like, “Yeah, sure.” Two sold-out nights at Gillette Stadium. And she showed up at my house, day of the first show with this song. She pretty much had the “I Bet You Think…”, she had the title. She had what she wanted to say. She kind of just wanted somebody to bounce stuff off of. And I’ve talked to Liz about this a couple of times, because I was like, “Am I crazy? Do I remember this right?” She didn’t write down anything. She doesn’t write anything down. She just remembers. And it’s one of those real fun co-writes where you’re just the cheerleader. You’re the coffee maker. You’ll get a sandwich if they need to eat or something, but you’re there for moral, you’re the best friend, right?THOMAS RHETT: Right. No doubt.LORI MCKENNA: Those songs. And I just sat there and tried to be her best friend and listen. And if there was something that I thought I could add and she just wrote this song and we sang it maybe once and I typed the lyrics and she jumped in a car, went to the show-THOMAS RHETT: Went and played Gillette.LORI MCKENNA: Yeah. Went and played Gillette. I mean, the kids all came, took care of us all night long. It was extraordinary.

Lori McKenna on “Humble and Kind”
LORI MCKENNA: The reason I wrote that song by myself is because I just happened to be by myself that day, but you know how sometimes they land. You don’t know where you are, and you’re driving down the road, and they just land. These little pieces of heaven. I wish I knew who said this, it may have been Guy Clark, but somebody told me that somebody famous once said, “God will give you five songs, and the rest you have to write yourself.” This was just a day that I was the lucky songwriter that happened to catch this idea. I had thought about it for a little bit, and I just sat down and I was just trying to write down all the things that my husband Gene and I wanted our kids to know. At the time my youngest was 10, my oldest was 25, and so that’s why there’s so much… You’re in this world of hold the door, say please, say thank you, wash your hands, put the toilet seat down. You don’t have boys, but put the toilet seat down.
THOMAS RHETT: I still have that conversation, and I have all girls.
LORI MCKENNA: I have four sons. So, it’s that whole thing. Well you’re repeating so much, and in between those things, all that math, you’re trying to teach some of these huge lessons about life, and God, and a higher power, and human spirit, and all these things. I wanted to make sure I had a bit of each of them in it. When I sang it in my iPhone like I always do, and then I thought about it, and I was going back to me seeing Tim [McGraw] and Faith [Hill] around their kids quite a bit when our kids are similar ages, I was like, “I wonder if Tim would like this?” I just texted it to him.

Lori McKenna on “Girl Crush”LORI MCKENNA: “Girl Crush” was Liz Rose and Hillary Lindsey and myself. And that has a great story too, because I always stay with Liz when I go to Nashville. And our publishers put us together, the three of us together, and we decided, “Well, Lori’s staying here anyway, Hillary, why don’t you stay here too?” And we have sleepovers at Liz’s house, and we literally write songs from the minute we wake up to the minute we go to bed. And we were writing with Karen Fairchild and Kimberly Schlapman. One day at 11 o’clock they were coming over and the five of us were going to write songs. And the five of us wrote three songs that day, that afternoon. But before they got there, at 8:30 in the morning, Liz and I are sitting in the kitchen and Liz says, “Well, we get a couple hours before the girls get here. Do you want to try to write something?” And I’m looking at my titles in my phone, every songwriter has a list of titles in their phone. And I said to Liz, “I have a title, but I don’t know what it means, “Girl Crush.” I know what it means, but I don’t know what the song would be about.” And she’s like, “Man, that sounds tricky.” And I was thinking, it was tempo, which we could have a whole other conversation about this, but I can’t write those tempo… I can’t write fun songs like you can. I wish I could, but that’s a whole other conversation. But anyway, Liz and I were like, “It’s too hard. It’s too hard.” Hillary comes down and you know Hillary Lindsey quite well and Liz Rose, both of them geniuses, but Hillary comes down and I swear to God, she’s sitting on the couch holding one of Chris Stapleton’s guitars, swear to God.THOMAS RHETT: Then something has to come from that.LORI MCKENNA: Right. So, I just looked back at my phone and I said, “Hillary, I want to write a song called ‘Girl Crush.’” And Liz is a little irritated because we just talked about this and we decided it’s too hard. And Hillary’s saying the first four lines of that song exactly as they are.

Lori McKenna on Lady Gaga and “A Star Is Born”LORI MCKENNA: I went to LA to write for the movie. Dave Cobb called, so that’s another one. When you call, I’m always going to answer the phone. I promise. And when Dave Cobb calls, you always answer the phone, because he always has these crazy projects that he’s working on. He calls and he’s like, “We’re going to go out to LA and write for the Star is Born project.” They’re still putting the script together and Lady Gaga will be there and we’ll just have the band there and we’ll track it all at once and all these crazy things. But we had this one magical day where it was just the four of us. It was Lady Gaga, Hillary, myself and Natalie. And Natalie was sitting, playing on this piano that the Beach Boys had cut “God Only Knows” on.THOMAS RHETT: My gosh. You keep finding yourself with instruments in your hands that don’t belong to you.LORI MCKENNA: I’m telling you whatever there’s a magical instrument, right? Under your fingers. This is when… Maybe this is when God appears. I don’t know.THOMAS RHETT: Absolutely.LORI MCKENNA: And we found that song [Always Remember Us This Way] and I sat on the floor and I typed it out and Bradley Cooper came in and Lady Gaga sang it just for a bunch of people standing around. Just sang it. I remember just how emotional that was.

Lori McKenna on “The Hill”LORI MCKENNA: We’re on Zoom, the three of us [Emily Weisband, Jordan Reynolds, Lori]. And I was going through titles and I had a title, “The Pill.” I thought, well, it could be about a million things. And it reminded Emily of “The Hill.” She heard the rhyme. And this is again, this is something I could never have created unless I asked Emily, “Hey, what’s a phrase you and your fiance word around house a lot.” And she said, “We always, we always, we kid around with each other and say, ‘Is that really the hill you want to die on?'” And I’ve heard that term a million times too. And then sometimes it will just that title, oh The Hill, man when you… It’s just such a vision in your head where you see those words, “The Hill.” You think a million things. And then the way she saw it as well, it could be a love song. And I think that’s where we immediately just were like, “oh my God, let’s do that.” That was a great day. It was so fun to just listen. And we’re all in that boat. We’re all in these relationships where we’ve had these conversations. We’re like, “Wait a minute, what is the thing that we’re really fighting for?” Isn’t what how much-THOMAS RHETT: What are your priorities?LORI MCKENNA: Yeah.THOMAS RHETT: For sure.LORI MCKENNA: Yeah. Isn’t it how much we love each other?THOMAS RHETT: Come on. Preach it.

In this article:Lori McKenna, Thomas Rhett