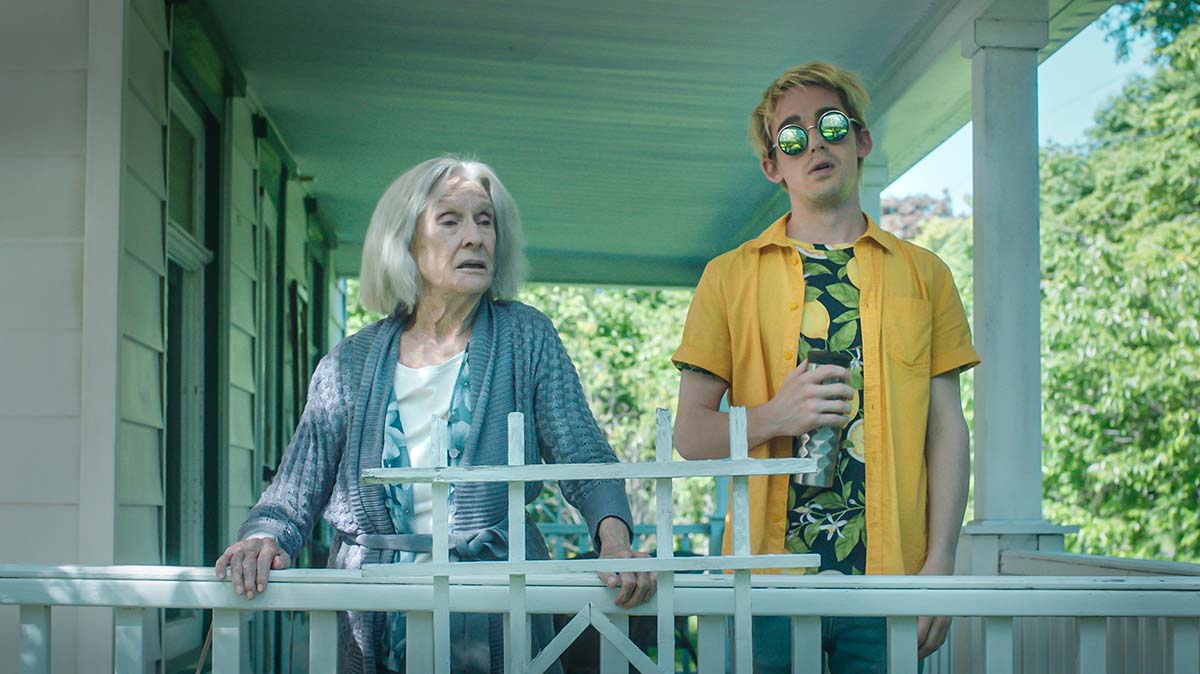 Aspiring drag queen Russell (Thomas Duplessie) leaves his long-term boyfriend following a fight over his career choices. Having never made it as an actor, despite moving from his small town to Toronto to pursue his dreams, Russell has fallen into drag performing. Taking up residence with his elderly grandmother Margaret (Cloris Leachman), Russell sets out to find himself and help his slowly deteriorating grandmother retain her independence.

‘Jump, Darling’ from film-maker Phil Connell is essentially an exploration of two people who aren’t content with their places in the world and want to make changes. For Russell, his failure to make it as an actor and the pressures put upon him by his boyfriend make him want to run away from his life and start fresh somewhere else. That somewhere else is with his grandmother Margaret, who he hasn’t seen in a while. For Margaret, she’s being pressured by her daughter Ene (Linda Kash) to move into an assisted living facility but she’d rather not be alive any more than agree to it.

At first Russell and Margaret’s pairing seems odd but it’s soon established that they can be who each other needs, even if it’s only for a finite amount of time. Clearly suffering from depression, Russell tries to kill himself by running his late grandfather’s car in a closed garage and that’s thwarted by Margaret. Through their interactions Margaret encourages Russell to be who he wants to be, and fears he may turn out like his late grandfather, while Russell navigates around Margaret’s dwindling faculties to ensure she can live a life that she feels is worth living and independent.

Russell forces himself into the only ‘gay-ish’ bar in town and talks his way into giving the occasional drag performance, and he finds himself attracted to the hard-to-read barman Zachary (Kwaku Adu-Poku). Determined to make a go of things, Russell’s plans are thrown a curveball when his mother unexpectedly shows up and starts to question why he’s moved in with his grandmother without telling anyone.

The dynamic between Russell, Ene and Margaret feels realistic, and while the story may hit familiar beats it’s the chemistry between the three actors that sells it. Duplessie plays Russell as a deeply confused and conflicted young man, and he makes the character likeable despite Russell being unlikeable for much of the time. Kash on the other hand provides a nice balance as the pushy Ene who wants the best for her mother and son, but realises perhaps she doesn’t really know either of them as well as she thought.

The film belongs to the late Cloris Leachman though. One of her last roles before her death, she delivers a sensitively nuanced performance packed with emotion. It’s Margaret you really connect with and it’s her that you’re rooting to get the ending that she wants. Leachman’s performance elevates the film above the material and it’s a testament to what a stellar actor she was.

‘Jump, Darling’ is a solid effort from Connell and there’s plenty to like about it. I’d have liked some of the deeper character issues to be explored further and I thought the film ended perhaps five minutes earlier than it should. That being said, there’s enough here to draw you in and the storyline is engaging. Honestly though, it’s worth watching just for Leachman’s performance.