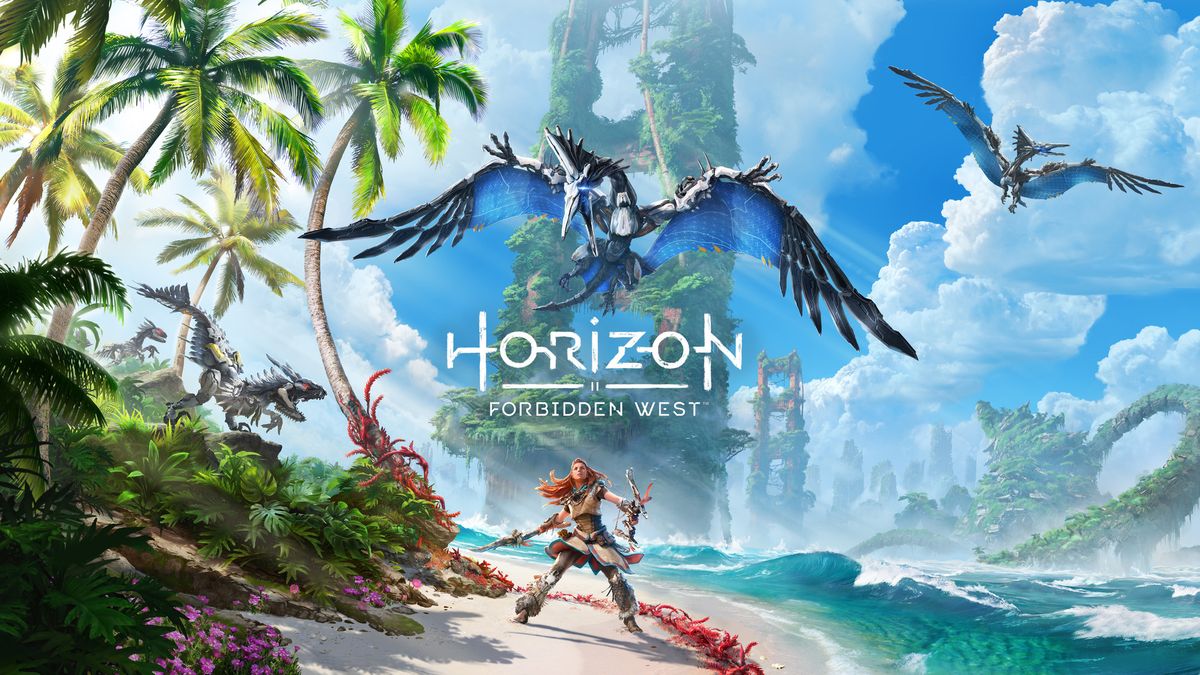 Horizon Zero Dawn, especially when combined with its Frozen Wild expansion, remains one of the best PS4 titles. Now almost 5 years later, Guerilla Games are back with the sequel, Horizon Forbidden West. Aloy’s latest adventure is also available on PS4 but it’s PS5 players who are in for the biggest treat.

As much as possible this is a spoiler-free review.

Horizon Forbidden West begins with a quick recap of events from the previous game. However, if you’ve never played Horizon Zero Dawn, I’d strongly urge you to go and play it first. There’s such a lot of story that you’ll be missing out on if you don’t. That said, if you’re happy to just jump into this one expect to be a little confused as to what is going on.

Forbidden West thrusts you back into the 31st century and takes place around six months after the events of Zero Dawn. The introduction is surprisingly lengthy and you immediately get to spend time with an old friend from the first game. No longer an outcast, Aloy now understands her importance and is seen by the people as their saviour. However her job isn’t complete as the world is still in danger from a red blight that is spreading across the land.

If you’ve played the first game then things will feel instantly familiar. However, the developers have obviously been listening to feedback as there are countless quality of life improvements. Just tiny things make a big difference such as free fast travel between campfires you’ve discovered or the ability to craft ammo from your weapon wheel.

Before Aloy heads to the Forbidden West, the game takes time to teach you how to navigate the world. It’s possible to have it really hold your hand which new players will appreciate. Returning players will likely want to opt for the more sparse HUD that encourages you explore more yourself. If you do go for this mode, a click of the right-stick can highlight things of interest such as plants, loot and climbable ledges. A simple swipe up on the touchpad also reveals the HUD.

Once you get the basics out of the way the world starts to open up. The starting areas feel big but they are tiny compared to the areas later in the game. The world map is massive and jam-packed with things to discover. It’s actually a little intimidating and rather overwhelming at first.

As well as returning machines I was pleased to see plenty of new machines for Aloy to defeat. Scanning machines with your focus highlights their different components and gives information on their weaknesses. How you tackle each situation is mostly up to you. I tended to enjoy going for a stealthy approach as much as possible. However if you get spotted then you need to be prepared to fight. I love how you can target specific parts of a machine to take it down faster with the right ammo.

Aloy is again equipped with her trusty bow and spear. A right-click while aiming allows Aloy to concentrate which slows down time to help you aim. There’s also a neat new gyro aiming mechanism that can also be enabled which some players will love. Traps also return allowing Aloy extra options when tackling machines. Throughout the game the developers have also made the most of the DualSense controller. The haptic feedback, adaptive triggers and also speaker are put to fantastic use which really adds to the immersion.

As you progress there’s a lot of other weapons and gear for you to discover. Weapons-wise I was a big fan of a new spike thrower that explodes shortly after impact. Gear-wise I loved the addition of the Pullcaster, which lets Aloy solve simple puzzles and climb using grapple points, and the Shieldwing, which lets her glide when falling from height. Aloy can also now use workbenches to upgrade her kit providing she has the right resources. Speaking of resources Aloy has to pick up and carry an awful lot of stuff. When she has too much stuff it gets automatically sent to her stash. This is accessible at various towns but somehow she can also restock certain items no matter where she is.

If you obtain enough skills in a particular tree then you unlock extra bonuses called Valor Surges. When unlocked you can choose which to have equipped and then choose to activate it once you have filled your Valor bar. Using these abilities can feel essential in battle and I enjoyed experimenting with them.

Zero Dawn was a really nice looking game but Forbidden West is absolutely stunning. Characters look lifelike and their animation is much improved over the first game. The lighting and detail in the world is astounding and I would often take some time out of my quests just to explore and capture some screenshots. There’s a choice of Performance mode which delivers 1800p visuals and 60fps, or Fidelity mode which drops to 30fps at 4K. I tried both modes out but spent most of my time in Fidelity mode because it really is gorgeous to behold.

There’s a lengthy main questline to follow through the game which tells the story. It’s heavy on the sci-fi but full of twists and turns that kept me guessing all the way through. Aloy is laser focused on her mission and constantly pushes for you to make progress. As keen as I was to discover the next piece of the story, what really surprised me with Forbidden West is how much I enjoyed the side quests.

I can’t remember the last time I wanted to experience everything a game has to offer. The side quests here I found to be far more involved than simple fetch quests. One early example is when I met a town leader who cared more for lining his pockets than his people. I took an instant dislike to the man and was happy to take time out from the story to deal with him. This relatively small area took me a good 10 hours to exhaust the side quests. At a rush on a first play through I’d be surprised if many players get through in under 30 hours. There’s a lot of game here and the developers weren’t joking when they said it could take hundreds of hours to fully beat.

There really is a seemingly endless list of things to do outside of the quests. There’s Tallnecks to track down, scavenger contracts, rebel camps, ruins to explore and pit fights to take part in to name but a few. There’s even a board game to master called Machine Strike that features collectible pieces.

For such an ambitious title I was pleasantly surprised at how few bugs or problems I encountered. The most serious I found was a single crash after an objective seemed to lead me deep underwater. Upon restarting the problem had thankfully disappeared and the marker I was following had moved to a cave. Another issue I came across in the many hours I’ve played has been tiny graphical errors. These have been infrequent and only happened in handful of places when the lighting has been a bit off for a split second.

My only other gripes during my playtime have been very minor. It’s possible to customise the items accessible from your D-Pad but it can be a bit clumsy to use them, especially during combat. There’s been an occasional encounter that felt unfair that required several attempts to beat – possibly down to my lack of dexterity or being low on resources. If I’m being really picky Aloy can also sometimes be a bit too chatty with a habit to narrate everything she’s doing. You can be sure that if you take too long to figure out what to do next she’ll point you in the right direction.

Horizon Forbidden West is a standout next-gen title with a gripping story and thrilling combat. It’s an absolutely essential purchase for fans of the original and for me easily the best game available for the PS5. Guerrilla deserves extra credit for delivering something this good during a pandemic. What an outstanding achievement.

Horizon Forbidden West was reviewed using a digital code provided by the publisher.