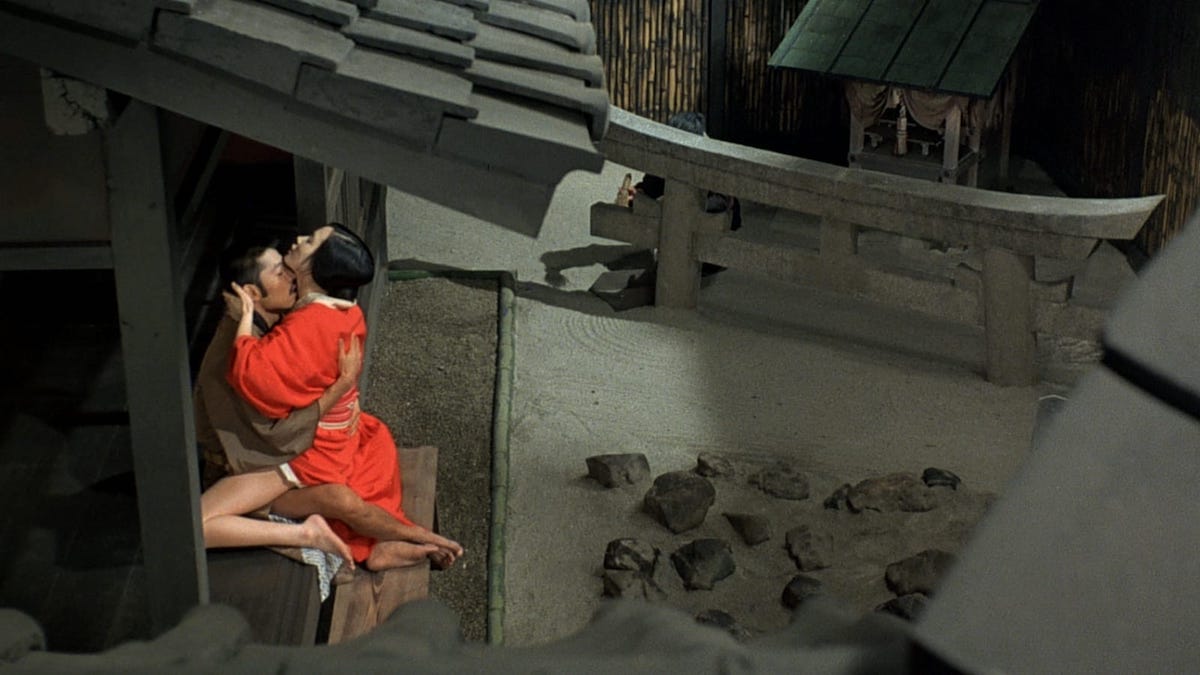 ‘In the Realm of the Senses’, written and directed by Nagisa Ōshima is a ravishing tale of sexual desire, obsession, jealousy, and violence. One of the most notorious and controversial arthouse films ever made, it arrives on the Criterion Collection this month, beautifully restored, fully uncut, and packed with extra features.

Much has been written about this film over the years, but for those coming to it for the first time, the film was essentially shot in secret and then smuggled to France to be developed and processed. This was because Ōshima was adamant that a film about profound sexual obsession would have to depict real sex. The production therefore had to go to extreme lengths in an effort to circumvent Japan’s strict obscenity laws.

As one of the first mainstream films to prominently feature unsimulated sex, ‘In the Realm of the Senses’ was a taboo busting piece of work, but attracted the attention of censors from all over the world as a result. Even today it is still banned (in its uncut form) in its native Japan.

Based on a sensational true story, the film takes place in pre-war Japan, and stars Eiko Matsuda as Sada Abe, a former prostitute now working as a maid in a hotel owned by Kichizo (Tatsuya Fuji). An affair between the two begins almost immediately, and he becomes enthralled by Sada, as her lust and sexual appetite are as insatiable as his own.

The affair escalates into something all-consuming, and their obsession with each other propels them on a quest for ever more euphoric sexual experiences. As the master-servant dynamic between them starts to shift, the jealousy they inflame in each other begins to manifest in sadomasochistic ways.

The ordinary world ceases to exist for them. They fuck for days without even stopping to eat. Serving staff come and go, but Sada and Kichizo barely even register them. A brief scene reminds us of the building militarisation happening in Japan, as the war creeps ever nearer, but this historical context only further serves the film’s theme of individualism in the face of traditional society.

Cynically dismissed over the years as artsy-porn, ‘In the Realm of the Senses’ has been unfavourably compared with the likes of ‘Caligula’ and ‘Deep Throat’. But for all its graphic sex and violence, this film is not some trashy exploitation flick. Yes, the sex (much of it real) is almost non-stop for the entire film, but it is fundamental to the story, the characters, their destructive relationship, and why it all ends the way it does.

Ōshima also crucially shoots the film in an incredibly matter of fact way. Unlike the infamous Bob Guccione filmed scenes in ‘Caligula’, there is a neutrality to the framing. This adds an uncomfortable—though certainly intentional—sense of voyeurism to the film, but the detached gaze and decidedly un-sexy style, leave it in no way comparable to the writhing Penthouse Pets in ‘Caligula’.

The disc comes with an audio commentary with critic and historian Tony Rayns. Ōshima and His Actors is an interview for Belgian TV from 1976, which touches on a very interesting element about what making a film like this does to an actor – in that it places them outside the mainstream. This was Eiko Matsuda’s first lead role in a film, whereas Fuji was already an established star. Looking at that through the lens of contemporary standards makes you wonder about the power dynamics of the shoot. Look at their respective IMDb pages, and you’ll see that his career carried on unharmed, but hers was destroyed.

Recorded exclusively for the Criterion Collection in 2008 is an interview with Tatsuya Fuji. This in-depth discussion with the leading man sees him recalling his experiences of making the film, and the uncharted territory it took him to as a performer. There’s 6-minutes of deleted footage, which was excised to keep the film at the producers preferred running time.

Recalling the Film is a documentary from 2003 featuring interviews with several crew members.  Finally, the original US trailer, which provides a great image comparison for the incredible restoration.

In this article:Criterion Collection, In the Realm of the Senses, Nagisa Oshima