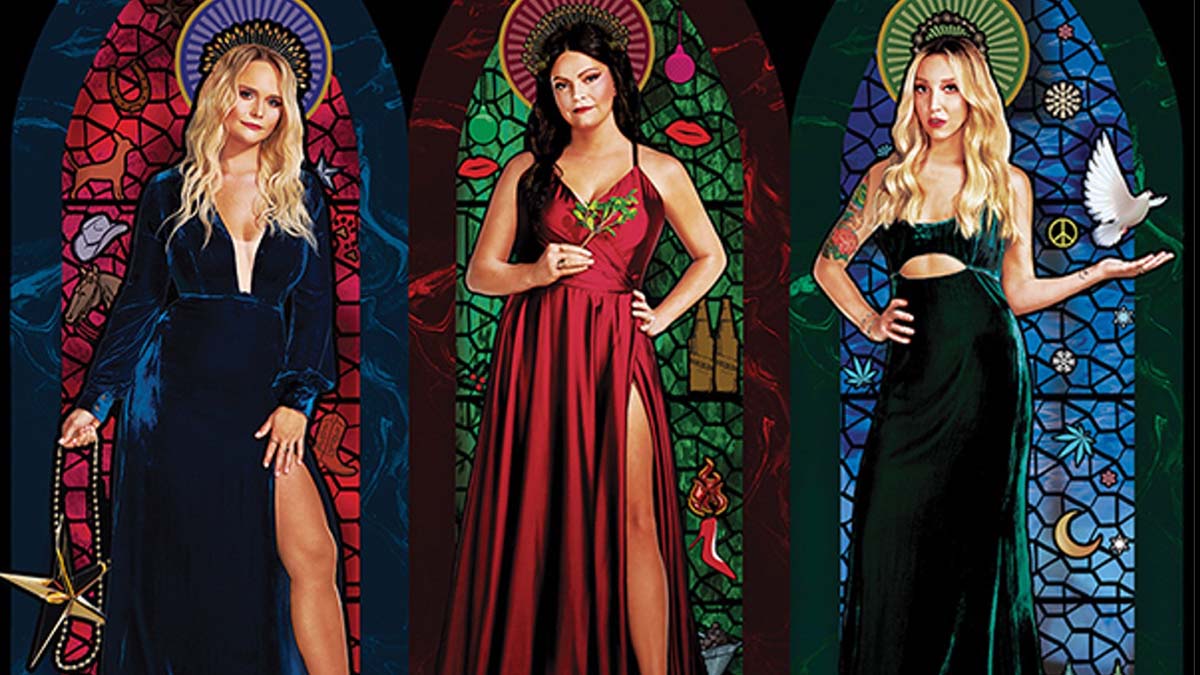 We’ve reached that time of the year when artists start wheeling out the Christmas albums but we didn’t expect to be getting one from Pistol Annies aka Miranda Lambert, Angaleena Presley and Ashley Monroe. They kicked back into action in 2018 with ‘Interstate Gospel’, their first studio album in five years and it was a welcome return for the powerhouse trio. We hadn’t heard sight nor sound of the Annies for the past year or so, making it a complete surprise when they announced they had a Christmas album coming out.

‘Hell of a Holiday’ is perhaps best described as an alternative Christmas album and it’s most certainly not the most festive of collections I’ve heard. It features 10 original tracks and three covers, and it’s without a doubt a very different offering than what most artists come up with for this time of year. Pistol Annies are known for their tongue-in-cheek humour and biting lyrics, and that hasn’t changed just because they’re singing about the holidays. The title track opens the record and it’s an uptempo start to an album that has a tendency to drift into downtempo. The trio’s harmonies are central to the track and the instrumentation recalls Christmas songs of yesteryear, and it’s fair to say it’s one of the more positive moments on the record.

Lead track ‘Snow Globe’, a combination of hand claps and harmonies, explores the idea of being trapped in a snow globe so you can live your festive dreams all year round. It’s a quirky sentiment and there’s something quite heartwarming about it. The album takes a darker turn on third track ‘Harlan County Coal’ where the trio joke about no one being sober at Christmas before delivering lyrics about a couple struggling to afford the holidays who are at odds with one another. It’s a far cry from the usual wide-eyed optimism of Christmas songs, where it’s usually suggested everyone goes out all for the holidays.

A cover of Merle Haggard’s ‘If We Make It Through December’ is one of the highlights on the record. With Lambert on the lead vocals, the song sounds like something that could neatly fit on any of her studio albums. ‘Make You Blue’ explores the pressures that come with the festive season and ‘The Only Thing I Wanted’ celebrates the idea of finding happiness in love rather than material gifts.

The album picks up again towards the end. ‘Sleigh Ride’ is more in line with my idea of Christmas music and the harmonies of the three women are brilliant. ‘Joy’ is about celebrating the important things and putting the material to one side, a message that is often lost in the mad rush to buy the best presents you can find. ‘Hell of a Holiday’ closes with an acapella version of ‘Auld Lang Syne’, which is a beautiful way to bring things to a close.

‘Hell of a Holiday’ is definitely a different kind of Christmas album. For me, it’s a little bit too downtempo and dare I say it dreary in places. I like my Christmas music to be uplifting and infectious, and while I appreciate the Annies are giving an alternative perspective, I found the album to be a bit too much of a bummer in places. Don’t get me wrong, it has its moments but I don’t think I’ll be reeling this album out to soundtrack my Christmas parties.